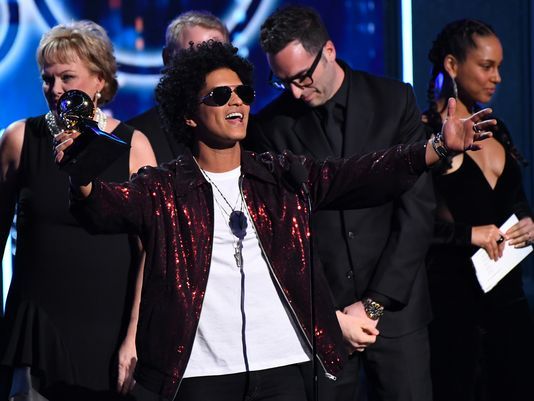 The biggest winner of the night, Bruno Mars, edged out all his contemporaries as he won in all six of the categories he was nominated for, including “Album of the Year” and “Record of the Year”.

The hip-hop category was championed by prolific rapper, Kendrick Lamar, who won in five categories including, “Best Rap Song”.

Leading this year’s award with eight nods, veteran American hip-hop act, Jay Z, did not win in any of the categories.

This year’s award, regarded as the most diverse Grammy in its 60-year history, had as its highlight a politically charged campaign spearheaded by Kesha with Hilary Clinton making a surprise cameo appearance.

The emotional performance which had many in tears saw an all-white performance joined by Bebe Rexha Cyndi Lauper, and others singing the song “Praying”.

Other highlights of the night included star-studded performances by some heavyweights in the international scene including – Lady Gaga, Logic, Kendrick Lamar, Bruno Mars, Sam Smith among others.

Best comedy album: Dave Chappelle – The Age of Spin and Deep in the Heart of Texas

Best country album: Chris Stapleton – From a Room: Volume One

Song of the year: Bruno Mars – That’s What I Like

Best Rock Album: The War On Drugs – A Deeper Understanding

Best R&B Performance: Bruno Mars – That’s What I Like

Best R&B Song: Bruno Mars and co-songwriters – That’s What I Like