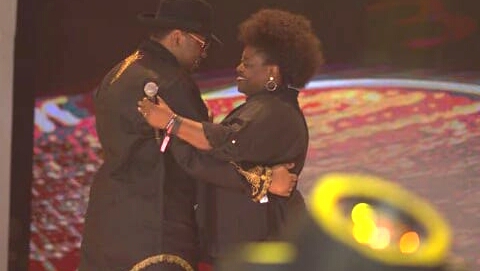 The 3 Thrones musical concert, which held recently at EKO Hotel Lagos, was filled with so many memorable moments. But, one stood out.

At the star-studded event, Mavin Records First Lady, Tiwa Savage, stopped her performance midway to comment on the increasing number of failed marriages among young people.

The single mother-of-one asked the husband and wife musical duo, Tunde and Wunmi Obe aka T.W.O the secret to their successful married life. The pair has been together for over two decades.
Tiwa started by saying, “So I wanna ask a very, very important question. How have you guys lasted so long? And this isn’t just for stage. Yesterday I saw them and they were holding and hugging. So I was like OK now, there’s no camera here now it’s enough.”

Wunmi responded saying, “I married the man I love; he’s my friend and everything. Mutual respect is also very important to a marriage. Communication, patience, tolerance are also imperative. Most importantly; the only third party allowed in your life should be God and no one else. Communication, friendship, patience and tolerance”.

Corroborating his wife’s comment, Tunde also added, “We don’t have or invite any third party in our marriage apart from God.”

The response sent the crowd into frenzy and also earned them resounding applause and a standing ovation.

Tiwa and Teebillz were one of Nigeria’s showbiz power couple up until cracks in the union came to light in April.

It became obvious that there was indeed trouble in paradise when the celebrated singer sacked her husband as her manager in 2014.

In the same year, it was also rumoured that their marriage had crashed. A pointer was when Tiwa failed to wish her husband a happy birthday on her social media page, as it was part of her tradition.

Although the couple has since separated, people in the know say reconciliation will never happen. They also say that Tee Bilz has been granted a monthly access to see his son. Tiwa’s mum and her Philipino nanny look after her son whenever she has performances and gigs to honour.