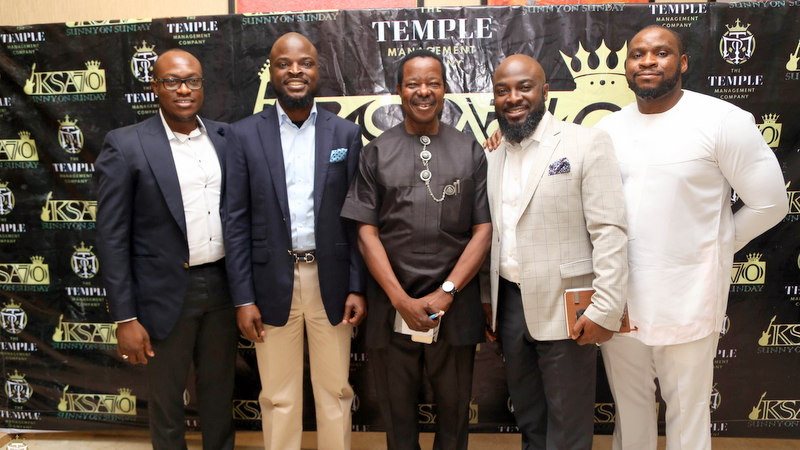 The event was unveiled to the media at a press briefing, which held in Lagos on Tuesday at Four Points By Sheraton Hotels.

At the event, KSA revealed that his colleagues Jimmy Cliff, Youssou N’Dour and Awilo Longomba would join him at the world-class concert scheduled for December 11 at Federal Palace Hotel and Casino, Victoria Island, Lagos.

Speaking about the event, Idris Olorunnimbe, CEO of Temple Management Company, stated that the company was proud to shoulder the responsibility of celebrating a Nigerian music icon on a big scale that has never been witnessed before.

“For us at Temple Management Company, this is a national assignment that has been long over-due and we are glad to shoulder this responsibility. We want to assure fans of King Sunny Ade of a truly world-class concert. We are working with partners in South Africa and other parts of the world to deliver a befitting celebration of a legend,” Mr. Olorunnimbe said.

Also speaking about the coverage of the concert, Martin Mabutho, General Manager Marketing and Sales, MultiChoice Nigeria, said “We are excited to broadcast the celebration of a musical legend, King Sunny Ade, whose music transcends generations and borders. We realize the impact he has had on many who love good music and we are glad to partner with Temple Management Company to bring this historic celebration to our customers.”

DStv and GOtv subscribers can catch the legacy concert live on channels 199 and 29 respectively, on December 11,2016.

King Sunny Ade who turned 70 on September 22, 2016 has been performing for over 50 years. The veteran musician who has been dubbed the King of Juju Music has been nominated twice for the Grammy Awards. His illustrious career has produced a lot of albums featuring international collaborations with Stevie Wonder, Manu Dibango, Youssou N’Dour and Salif Keita among others.