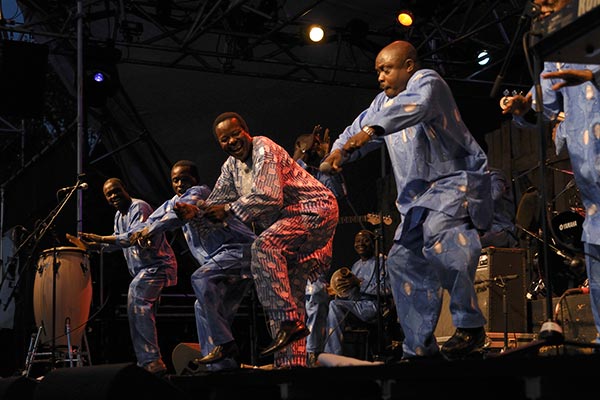 Over the course of a career spanning over five decades on the stage and as a recording artiste with more than 120 albums, King Sunny Ade is one of the most influential artistes ever from Nigeria. He led the exposure of his genre of music on the global stage, while remaining King to the Juju music tradition.

With two Grammy nominations, King Sunny Ade is among a select group of the world’s greatest artistes whose musical instruments have been preserved in the hallowed Musical Instrument Museum (MIM) in Phoenix, Arizona, United States of America.

In commemoration of the Juju music king’s 70th birthday, Premium Times takes you on a journey through the life and accomplishments of the living legend.

Sunday Adéniyi Adegeye, known as King Sunny Ade (KSA) was born on September 22, 1946 to a royal family of Ondo town in South-west Nigeria. His father was a church organist, while his mother was a trader. The youthful Ade horrified his parents by pursuing music, which was then considered a profession for commoners. He left grammar school in Ondo under the pretence of continuing his education in Lagos. There, in Nigeria’s federal capital at the time, his iconic musical career started.

In 1963, he joined Semipro Band, a group playing Juju, a popular Nigerian guitar-based music style that had become popular since the ’20s, which had been radically altered by the infusion of electric guitars and Western rock influences. Within a year, Ade was a guitarist with a top Juju outfit, Rhythm Dandies, led by Moses Olaiya who would later branch out into drama and gain fame as a comedian. By 1967, Ade had formed his own band, the Green Spots Band, and recorded his first single, “Challenge Cup,” which celebrated a national soccer championship and became a hit.

Over the years, for various reasons ranging from changes in his music to business concerns, Sunny Adé’s band changed its name several times.

By the early ’70’s, Ade’s Green Spots had grown into the African Beats, an orchestral ensemble with four or five vocalists, just as many guitarists and the talking drum players so central to the distinctive Juju sound. Ade’s style of Juju music is a gently hypnotic, polyrhythmic mesh of burbling guitars, sweet harmony vocals, swooping Hawaiian guitar, and throbbing talking drums.

By 1975 KSAwas a certified superstar in his homeland; by the decade’s end, he’d released a half-dozen albums, selling around 200,000 copies of each. He set up his own Sunny Alade record label and Ariya Nightclub in Lagos. The early ’80s found Ade building a substantial European audience, leading Island Records to sign him for both Europe and North America, where his influence had already been felt on such albums as Talking Heads’ Remain in Light (1980) and King Crimson’s Discipline (1981) which got universal rave reviews, as well as brought about his first of many U.S. tours.

Like most great musicians, KSA, as he’s fondly called by fans over the years, has also been through heaven and hell. He met his Waterloo when his album, Aura failed to chart, despite a guest appearance by Stevie Wonder. Island records had no other option than to drop Ade. The African Beats then broke up, amidst dissension and members’ claims of being underpaid. Back in Lagos, Ade formed a new band, Golden Mercury, retaining his trademark sound.

Ade bounced back to international spotlight with his 1995 album, E Dide (Get Up), which was his first U.S. studio recording in a decade. It was followed by the Grammy-nominated 1998 release,Odu, a collection of traditional Yoruba songs, with which he was nominated for the second Grammy Award and thus making him the first African to be nominated twice for a Grammy. Apart from being an international musician, Sunny Adé is also prominent in Nigeria, running multiple companies in several industries, creating a non-profit organization called the King Sunny Adé Foundation, and working with the Musical Copyright Society of Nigeria.

In recent times, hip-hop music appears to be holding sway with the electronic media in Nigeria with massive airplays. Nonetheless, Sunny Adé’s musical output has continued to inspire a vast generation of other Nigerian musicians, who believe in the big band musical set up which Sunny Adé and late Fela Kuti are noted for. The musician, Lagbaja is one of the very many musicians Sunny Adé’s music inspired.

At 70, King Sunny Ade KSA has spent 45 years of his life doing what he loves best – singing and dancing.

Chief Tony Okoroji, the Chairman, Copyright Society of Nigeria (COSON), described him as a trail-blazer in the Nigerian music industry.

The tribute is coming as Sunny Ade clocks 70 years of age Thursday.

The COSON chairman told the News Agency of Nigeria (NAN) in Lagos that even at 70, Sunny Ade remains “an icon“, whose success should spur parents to support their children interested in making a career in music.

Upcoming artistes, who spoke to the News Agency of Nigeria (NAN) in Lagos on Thursday, described him as a cultural legend.

Elizabeth Oyovwe, a gospel artist said that she had always regarded KSA a “godfather’’ in the music industry because of his maturity both in style and trend.

“I always play the videos of Pa Sunny Ade to enlighten my intellect on the cultural touch whenever I was planning a show and even in the composition of my songs.

“I cherish the cultural touch he sustains in his music and he maintains it even outside the country,’’ she said.

According to her, Sunny Ade should be named “Pride of Nigerian Culture’’ as the leading projector of the nation’s cultural heritage to the world.

Speaking on her latest work, “Gallant of Praise’’, Oyovwe stated that the album featured four ethnic cultures, Hausa, Edo, Igbo and Yoruba in both the lyrics and the video.

The upcoming artist noted that it was her own way of promoting Nigeria’s rich culture and tradition to the outside world.

Similarly, a comedian Emmanuel Idemudia, popularly known as “Paparazzi’’ said that Sunny Ade’s works would remain timeless because of the wisdom in his lyrics.

“The songs of the Juju music icon is an ever active lyric that will remain relevant even decades after, unlike our contemporary songs by our young artistes.

“Though his songs are seen by many as songs for the matured minds, it is a challenge for the computer age musicians, as most young artistes drift towards alien entertainment.

“We need to redirect our youths to our cultural songs and performances like that of King Sunny Ade which is in line with programmes such as “Village Headmaster’’, “Tales by Moonlight’’, “Winds of Destiny’’ and lots more.

“The media industry should promote more of these cultural and epic works in Nollywood and national screens,” he said

Paula Mbah said that the Juju music exponent was her cultural role model that inspired her in compositions and stage performances.

“King Sunny Ade has raised my morale in learning how to play local drums and other traditional musical instruments during my stage performances.

“In fact, as a woman, I play the talking drum which is a major point of admiration from my fans,” Mbah added.

Another upcoming artiste, Otunba, urged the government to honour Sunny Ade for his cultural contributions to the entertainment industry.

“I see King Sunny Ade as a model that showcases the rich cultural heritage of our great country,’’ he said.