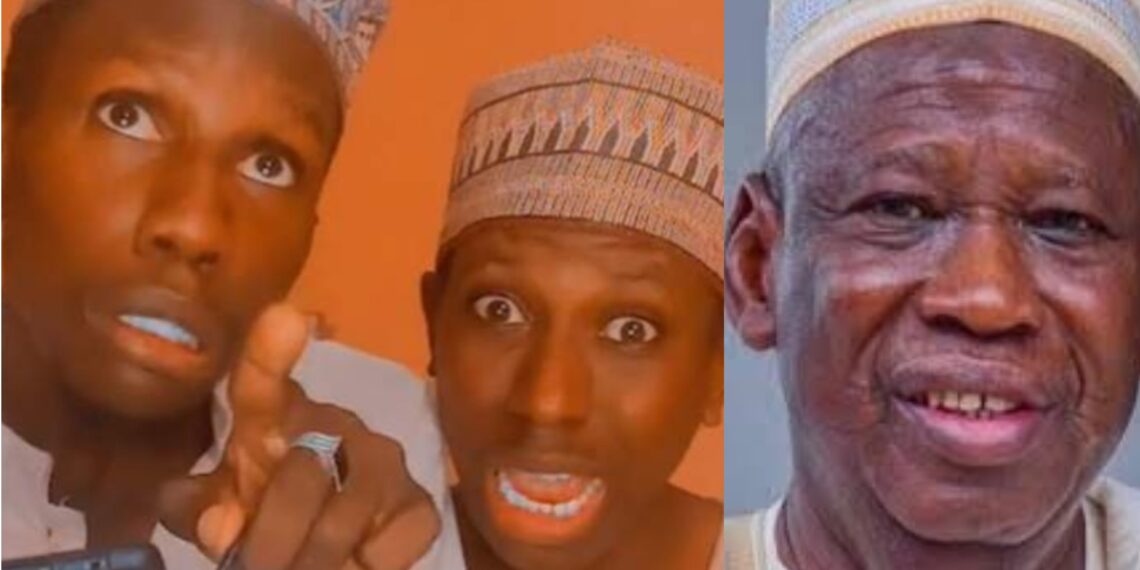 They are being remanded in prison custody for weeks for allegedly defaming the character of the governor of Kano, Abdullahi Ganduje, in one of their comedy skits.

The ruling delivered by the magistrate, Aminu Gambari, on Monday, ordered that the two boys be flogged with 20 lashes of the cane each, among other conditions.

The judgement also ordered that the skit makers sweep the magistrate complex for one month and pay N20,000 naira each for “public disturbance.”

The court also ordered them to return to their Tik Tok handles and other social media platforms and make another video apologising to the governor in the same manner as the video they earlier published.

The video, as seen by PREMIUM TIMES, that landed them in trouble was a comedy skit which saw them mimicking Governor Ganduje.

In the skit, they depicted Mr Ganduje as a corrupt politician who sold every available public plot of land in the state.

The comedians were arraigned by the police before Magistrate Court 58, Nomansland, Kano, on the 3rd of November.

When the charges were read to them, the two TikTokers pleaded guilty to charges of conspiracy and defamation of character of the governor.

The magistrate, therefore,re-ordered that they be remanded in prison custody and adjourned the case till 7 November.

Mr Ganduje, the governor, had previously been involved in a corruption-related scandal.

He had struggled to untangle himself from the public perception that he was a corrupt public servant since 2018 when Daily Nigerian published a video showing the governor collecting money from a government contractor.

In October 2021, PREMIUM TIMES published how his wife, Hasfat, was arrested by the EFCC over a bribery and land fraud case reported by her son.

Half Salary: Gbajabiamila speaks on withheld salaries of Nigerian lecturers