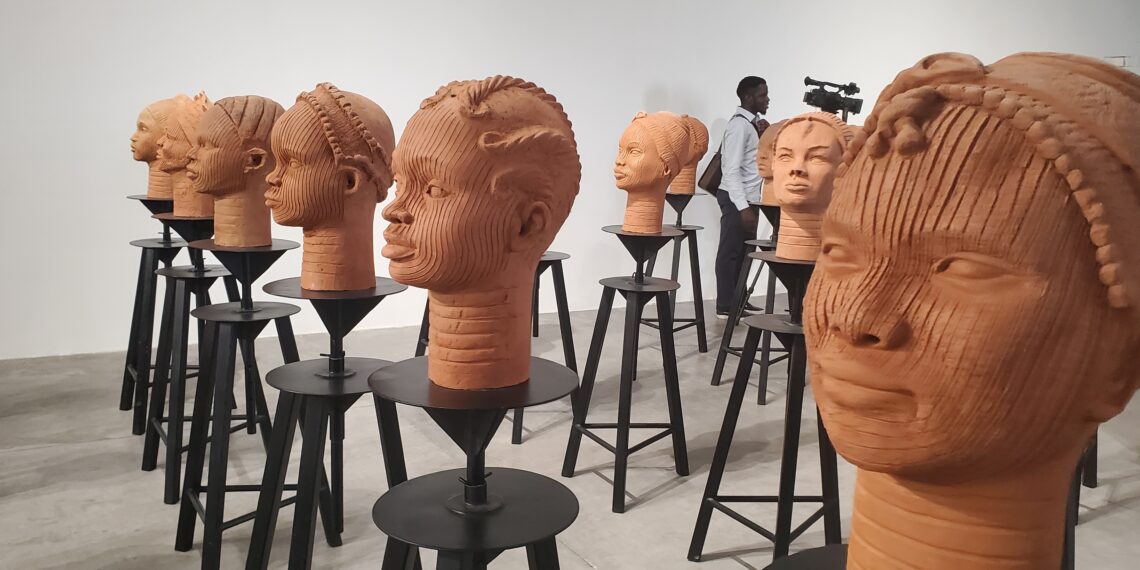 The exhibition was a collaboration between the Department of Fine & Applied Arts of the Obafemi Awolowo University and the families of the Chibok girls Boko Haram kidnapped in Northern Nigeria in 2014.

On Saturday, French multidisciplinary artist Prune Nuorry unveiled a significant exhibition in Lagos in collaboration with the Department of Fine & Applied Arts of the Obafemi Awolowo University and the families of the Chibok girls who were kidnapped by Boko Haram in Northern Nigeria in 2014.

Ms Nuorry specialises in sculpture and explores many media, notably through installations that include photography, film and performance.

Inspired by the ancient Ife terracotta heads and titled Statues Also Breathe, this collaboration aims to raise awareness about the plight of the Chibok girls who are still missing while highlighting the global struggle for girls’ education.

The exhibition at the Art Twenty-One Gallery in Eko Hotels in Lagos showed 108 sculpture heads made by Ms Nourry and art students from the OAU fine and applied arts department.

Eight years after, while most of the girls are still in captivity and the world seems to be forgetting about them, the collaborators remembered through the exhibition.

Ms Nourry explaining her reasons for embarking on this project, said, “When I heard about the Chibok girls for the first time, I was travelling with a work an “Army of girls” called the “Terracotta daughters” in China, and I heard about the Ife heads.”

She highlighted her dream of visiting Ife. “As a sculptor, it was my dream to go someday to Ife and work with the clay,” she said.

“It was love at first sight with the lecturers, and we share the same philosophy of transmission across disciplines, so we decided to make this project with 108 students mixing the heads inspired by the Ife heads but most importantly with portraits of the Chibok girls.”

She explained that the families entrusted them with the photographs of the children, and they sculpted the heads.

On spreading the art narrative internationally, she said, “The idea is to travel the world with the army and to show all the heads that personify the Chibok missing girls but also talk about girls’ education around the world.”

At the exhibition, a former Chibok captive named Amina was present at the unveiling of the artworks.

The artworks would remain exhibited in Art Twenty-One till 4th February 2023 before going on a world tour.

According to Nourry, a documentary movie will be exhibited with the sculptures in the Statues Also Breathe show, as it enables all the collaborators to include their voices and unique perspectives from the teachers, students, or parents of the missing girls or everyone that was a participant in the creative process.

After meeting the Chibok families to conceive the project, Nourry said she was entrusted with portraits of their missing daughters, which she used as inspiration for eight heads sculpted in clay.

She set out to create portraits of the high school girls imaged in the style of the iconic ancestral Ife head of the region.

From these eight original sculptures then moulded, she said 108 heads were cast in clay sourced from Ile-Ife, by potters from a female potter’s community in the Yoruba town of Ilorin and students of Obafemi Awolowo University.

On the 30th of September 2022, a one-day workshop was held at the university; 108 students sculpted and transformed each head into unique sculptures using portraits of the missing girls.

A delegation of mothers of the Chibok girls and girls who managed to escape Boko Haram captivity were also in attendance, honouring and remembering their friends and loved ones depicted in the sculptures.

‘‘This “army of girls” is indivisible and must remain together as a complete artwork.

The 108 heads, which were all signed by the respective students, are to be exhibited in Lagos before travelling around the World to remind of Nigeria’s rich and diverse history and culture and the present-day challenges that we must all address collectively as a global community.

Upon completion of the tour, they will return to the permanent collection of a museum in Africa, the organisers noted.

Nigeria-German singer Ade Bantu, real name Adegoke Odukoya who was also part of the project, revealed that when he searched the Ife clay potters, he couldn’t find one despite being a city where the Ife terracotta heads emerged from.

He said, “When I went to Ile-Ife in search of artisans that work with clay, nobody was working with clay there anymore, so I had to travel around Yoruba land trying to find artisans that still worked with clay, and that’s when I met a community of female potters.”

He also revealed that they sourced the clay used from Ile Ife and that Ms Nourry wanted to use the clay from Ife so she could pay homage to Ife because the Ife Terracotta head is well known.

Okunade Adeyinka, a lecturer of ceramics from the Department of Fine and Applied Arts, OAU, said he enjoyed working on the project.

He noted, “The project was a wonderful experience for us in the department; it’s the first of its kind. It’s the first time someone would come to collaborate with us, especially in the ceramics section.”

Additionally, he said the project addressed a social cause and added to Ife’s art culture. He said, “The Ife heads, we only see them in pictures, but this project is more of a reality bringing it to life and using it to speak a volume about the Chibok girls.”

“With these heads, we can see now, we can easily remember the Chibok girls, but we can also, and we can also see the traditional Ife Ori Oroko heads.”

He added that the department looks forward to more extensive and constant collaborations while planning more projects to showcase the Yoruba culture.

A student, Wasiu Olatunde, the technical assistant for the project, explained that the biggest challenge was the emotional hurt, and it took his group about two months to complete the project.