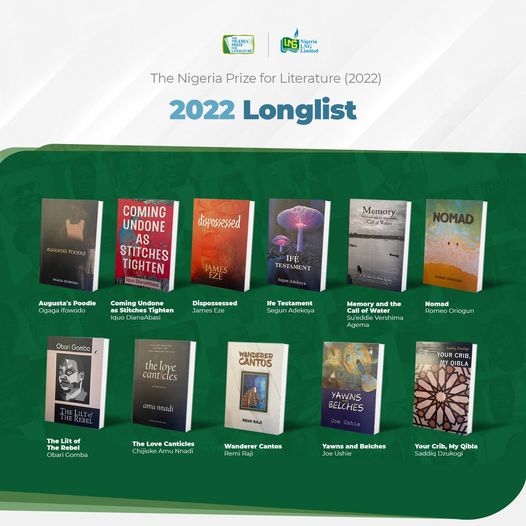 The Nigeria Prize for Literature 2022 Longlist

The Advisory Board for The Nigeria Prize for Literature on Friday approved the release of the Longlist of 11 in the running for the 2022 edition.

The Nigeria Prize for Literature, sponsored by Nigeria LNG to promote and reward excellence in writing, rotates yearly amongst four literary categories of prose fiction, poetry, drama and children’s literature.

The 11 books on the longlist released on Friday, in alphabetical order by their titles, are Augusta’s Poodle by Ogaga Ifowodo, Coming Undone As Stitches, Tighten by Iquo DianaAbasi, Dispossessed by James Eze, Ife Testament by Olusegun Adekoya and Memory and the Call of Waters by S. Su’eddie Agema.

Others are Nomad by Romeo Oriogun, The Lilt of The Rebel by Obari Gomba, The Love Canticles by Chijioke Amu Nnadi, Wanderer Cantos by Remi Raji and Yawns and Belches by Joe Ushie.

At the online announcement, the entries received were handed over to the panel of judges by the Chair of the Prize’s Advisory Board, Professor Akachi Adimora-Ezeigbo.

Adimora-Ezeigbo noted that the process would continue as “a shortlist of three is expected in September and hopefully, a winner in October.’’

Author and professor of Law at Babcock University, Ilishan Remo, Ogun State, Cheluchi Onyemelukwe-Onuobia, won the 2021 prize with her novel, Son of the House.

Sule Egya, a professor, leads the panel of judges. A professor of African Literature and Cultural Studies at Ibrahim Badamasi Babangida University, Lapai, Niger State, Professor Egya is a renowned poet and novelist who writes under the pen name E. E. Sule.

Mr Egya has written over one hundred scholarly articles and literary essays. His first novel, Sterile Sky, won the 2013 Commonwealth Book Prize for the Africa Region. His poetry volumes include What the Sea Told Me, which won the 2009 ANA/Gabriel Okara Prize.

Other judges are Toyin Adewale-Gabriel and Dike Chukwumerije. Adewale-Gabriel is a Poet and narrator. She has worked as a literary critic in The Guardian, Post Express and The Daily Times. She is often described as “the most beautiful and outstanding voice of the new African poetry.”

Dike Chukwumerije is a Nigerian Spoken Word and Performance Poetry artist and an award-winning author.

He has published several books and is the brain behind Night of the Spoken Word, a live Poetry show and a theatre production, Made in Nigeria Poetry Show. He also won the 2013 Association of Nigerian Authors (ANA) Prize for Prose Fiction.

Other members of the Advisory Board are Proffesors Olu Obafemi and Ahmed Yerima.