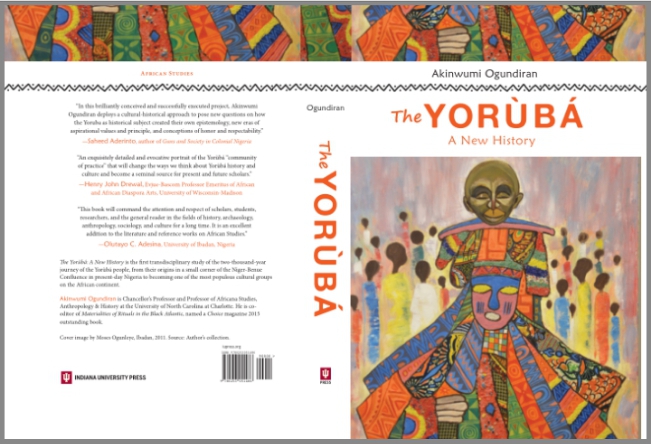 INTRO: “The Yoruba: A New History”

In the next two chapters, I examine how turmoil beset the Yorùbá world between the 1420s and 1570s as a result of internal and external sources of stress that upturned the lives of several communities and the processes of recovery that followed between 1570 and 1650

The Yoruba: A New History is the first transdisciplinary study of the two-thousand-year journey of the Yoruba people, from their origins in a small corner of the Niger-Benue Confluence in present-day Nigeria to becoming one of the most populous cultural groups on the African continent.

Weaving together archaeology with linguistics, environmental science with oral traditions, and material culture with mythology, Ogundiran examines the local, regional, and even global dimensions of Yoruba history.

The Yoruba: A New History offers an intriguing cultural, political, economic, intellectual, and social history from ca. 300 BC to 1840.

It accounts for the events, peoples, and practices, as well as the theories of knowledge, ways of being, and social valuations that shaped the Yoruba experience at different junctures of time. The result is a new framework for understanding the Yoruba past and present.

The deep-time history of the Yorùbá is the subject of this book. It is an account of (1) the experiences and events that shaped the long-term history of the ancestral Yorùbá people; (2) the generative actions that they used to translate their experiences into new practices or traditions; and (3) the principles and values that made life meaningful for them between ca. 300 BC and AD 1840.

Based on new questions, evidence, and conceptual frameworks, this book offers the opportunity to rethink Yorùbá history in new ways. In the following pages, I emphasize the cultural-historical approach in order to understand the “ways of being” of the Yorùbá as historical subjects (ontology); their “theories of knowledge” (epistemology); and the regimes of value and aspirational principles (axiology) that they created at different historical junctures. With these, I account for the cultural forms, practices, events, and ideas, as well as mentalities, imaginations, and meanings that constituted the Yorùbá experience for about two thousand years.

The book comprises ten chapters divided into five parts. The first chapter lays out the theoretical, conceptual, and methodological frameworks that shape the themes and contents of the volume. I make the case why it is necessary to bring empirical-, comparative-, and theoretical-minded habits to the study of Yorùbá history. In chapter 2, I provide a sketch of the historical groundwork that laid the foundation for the emergence of the Yorùbá world ca. 300 BC-AD 500. I also use a suite of archaeological, historical, and linguistic data to shed light on the four core principles that shaped the Yorùbá cultural identity in the second half of the first millennium AD. The first is the ilé (House), the building block of their sociopolitical organization. The second, the dyadic o.ba/ìlú-aládé (divine kingship/urban), served as the model of political culture and ideology of governance. The third is the complementarity of gendered duality as the epistemological framework for constructing and imagining social order.

And the fourth centres on the search for meaningful living through the quest for immortality. In chapter 3, I examine how these four principles and the knowledge capital associated with primary glass production and a universal cosmology/theogony were deployed to create the consciousness of a regional Yorùbá community of practice between the eleventh and the late 14th century.

In the next two chapters, I examine how turmoil beset the Yorùbá world between the 1420s and 1570s as a result of internal and external sources of stress that upturned the lives of several communities (chap. 4), and the processes of recovery that followed between 1570 and 1650 (chap. 5). During the age of restoration that followed the crisis, new practices of political culture and power relations developed that necessitated the revision of the community’s theogony and many aspects of its epistemology. The aftermath of these processes, especially their culmination in the rise of new hegemonic states and the entanglement of the Yorùbá in the Atlantic commercial revolution, 1630–1840, is the subject of chapters 6–9.

In those four chapters, I examine the interlocking threads of the political, economic, social, ideological, and intellectual innovations that wove the Yorùbá world into the web of the early modern economy, and the impact on the development of a new regime of value. My emphasis in this section of the book is on the permeation of the Atlantic merchant capital into the different domains of everyday life, both in the intimate spaces of the household and at the macro-level of the state.

I explore two themes in chapter 6: (1) the inauguration of slave/merchant-capital exchange and the hegemonic power politics that sustained it; and (2) the use of the imports deriving from the Atlantic slave trade as merchant capital and their investment in the commercialization of the region’s economy. In chapter 7, I focus on the regime of value—especially practices of taste, self-realization, aspiration, and social difference—created by the merchant-capital revolution. The chapter emphasizes the socialization of Atlantic imports into everyday life and the implications for the emergence of an object-centred Yorùbá world. Chapter 8 examines how the experiences of monetization, specialized production, a market economy, slave/merchant-capital exchange, and hegemonic power politics created new practices of labour relations and new avenues for highly pyramidal unequal accumulation. As a result, gender and class inequalities widened; the relationships between the individual and corporate groups were redefined, and the vertical and horizontal boundaries of social differences hardened. All of these led to a cataclysmic breakdown of social order, the subject of chapter 9. I link this breakdown to the persistent demands for African labour in the Americas and the unsustainability of the merchant-capital revolution that underwrote hegemonic power and individual accumulation.

“In this brilliantly conceived and successfully executed project, Akinwumi Ogundiran deploys a cultural-historical approach to pose new questions on how the Yoruba as historical subject created their own epistemology, new eras of aspirational values and principle, and conceptions of honour and respectability.”
—Saheed Aderinto, author of Guns and Society in Colonial Nigeria

“An exquisitely detailed and evocative portrait of the Yorùbá “community of practice” that will change the ways we think about Yorùbá history and culture and become a seminal source for present and future scholars.”
—Henry John Drewal, Evjue-Bascom Professor Emeritus of African and African Diaspora Arts, University of Wisconsin-Madison

“This book will command the attention and respect of scholars, students, researchers, and the general reader in the fields of history, archaeology, anthropology, sociology, and culture for a long time. It is an excellent addition to the literature and reference works on African Studies.”
—Olutayo C. Adesina, University of Ibadan, Nigeria

The Yorùbá: A New History is the first transdisciplinary study of the two-thousand-year journey of the Yorùbá people, from their origins in a small corner of the Niger-Benue Confluence in present-day Nigeria to becoming one of the most populous cultural groups on the African continent.

(Akinwumi Ogundiran is Chancellor’s Professor and Professor of Africana Studies, Anthropology & History at the University of North Carolina at Charlotte. He is coeditor of Materialities of Rituals in the Black Atlantic, named a Choice magazine 2015 outstanding book).