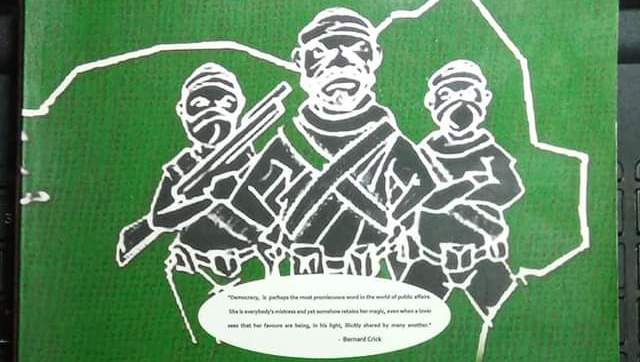 Column writing in newspapers, magazines or the social media beyond the entertainment aspect should be a platform not just for sharing knowledge but also a place for interrogating important issues. Everyday for the Goliaths: What Manner of Democracy is this ?, The Devil is not in the Politics and Politics is not a Game for Gentlemen are primarily collections of articles written by Simbo Olorunfemi over a period of five years, from 2014 to 2019.

These 131 articles of varying length including a poem, showcase the prodigious capacity of the author and how he is able to use his background in Political Science, International Law and Diplomacy as well as Journalism to closely appraise a panoply of issues that affect Nigeria.

So in one sense these three books reflect our recent political history from the events that undermined the Jonathan Administration leading to his historic defeat at the polls, and the problematic change under Buhari’s tenure.

Olorunfemi has two quotes that preface Everyday for the Goliaths. One reads:

Silence in the face of evil is itself evil: God will not hold us guiltless.

Not to speak is to speak. Not to act is to act.

These are the words of Dietrich Bonhoeffer, who was a Lutheran pastor, theologian, anti-Nazi dissident, and key founding member of what was termed the Confessing Church.

His writings on Christianity’s role in the secular world have become widely influential, and his book The Cost of Discipleship has been described as a modern classic. Bonhoeffer’s stance against the Nazis led to his being hanged in 1945.

The other quote is from Proverbs 31: 8-9 and reads: Speak up for the people who have no voice, for the rights of the down and outers. Speak out for justice. Stand up for the poor and destitute.

Olorunfemi’s position is that Nigeria’s history for sixty years has been dominated by Goliaths who have succeeded in undermining the system . Lofty policies are circumvented, governance is incapacitated and politics becomes a tool for mindless power grab.

The consequence is that there is a loss of sense of values which works to the advantage of the Goliaths. In his words: But beyond the incompetence on the part of our leadership and the systemic failure so apparent, the greatest challenge facing our nation today is the lack of an agreed code of conduct. We have lost a sense of appreciation for the right values. We are no longer able to tell apart what is right from what is wrong. Declaration for political office takes precedence over sobriety over loss of lives. Yet in the face of evil staring us all in the face, it is difficult to rally popular support for change among Nigerians. Ethnic and religious bigotry now dominate our thought, discourse and relationships. Pseudo-intellectuals deploy manipulation and fear, across the media, to engineer hatred among the people. The country sits on tenterhooks, rocked to and fro by those bent on pulling it further apart. (EFTG pp 3-4.)

The manipulations have also ensured that strong institutions which should be the pillars of the society and the support structure of democracy are grossly weakened and rendered ineffective.

All through the three books, detailed examples are given of how these institutions have been sabotaged. These are presented with convincing clarity.

The banking system is characterised by gross violations, so too the judiciary and all the other public institutions. An immediate consequence is that well-thought out policies are distorted to make room for inefficiency which benefits only the manipulators to the detriment of the larger populace.

Fuel subsidy provides a glaring example as as tool for shaping positive economic impact, yet the Goliaths and their allies are able to turn it into “a rent-seeking system fashioned to benefit banks, traders, government officials and all sorts of middlemen.”

At every turn policies and regulations are deliberately rigged without a care so that the public institutions become anti-people every step of the away even in such things as responding to official letters or in registering a trademark or patent.

Olorunfemi highlights the situation with several examples including these personal experiences in The Devil is not in the Politics in the article “Nigeria’s Anti-People Public Institutions and the ‘ise-ijoba’ Syndrome”.

A services platform was set up by the Federal Government not too long ago. It is a month since we engaged with them to register a trademark. No response has come, beyond the initial acknowledgement of receipt of application. How does anyone do business in an environment where the rule of law is away on vacation ? To get justice in the court requires a lot of prayer and fastng – a case we instituted in court against a bank since 2012 is yet to commence hearing even with the front-loading system in Lagos. (TDINITP p203)

These deliberate distortions and manipulations have become cancerous to the extent that they have affected the mindset of the citizenry.

Thus the Goliaths are able to continue to exploit the system and even when there is a semblance of change, they so easily change the narrative and work against anything that would render them irrelevant.

A case in point is the 2015 general elections where the incumbent lost for the time in Nigeria’s political history. The author provides a compelling background for this historic outcome and explains that it was a reaction to the accumulation of the ills that had become untenable within the system. So the eventual winner merely provided a rallying point for the collective expression of angst.

Yet the new path envisaged by that electoral victory has been strewn with serious obstacles because on the one hand those who lost out and in collaboration with the Goliaths are untiring in frustrating the possibilities of change.

Unfortunately, per contra, those who propel the new direction are not doing enough to overcome the hurdles being thrown at them.

So the point is that tough decisions need to be made and followed through with all the commitment necessary because in reality, politics is not a game for gentlemen. In the Biblical narrative featuring Goliath, the giant is eventually vanquished by a determined minnow called David.

Olorunfemi appears to argue that genuine change is possible through a renewed mindset and a willingness to engage the forces of distortion and manipulation. For such a situation to arise, generality of the populace must come to an understanding that change begins with the individual.

We must also begin to question the seeming established nomenclatures that have become vehicles of manipulation. Is there anything like true Federalism ? Is there a perfect constitution? Are strong institutions possible?

The success story of Cadbury is featured in an article and is clearly intended to show that with proper vision and planning and willing adherents, a strong institution can be created with benefits that can be transposed to the larger society thereby creating a ripple effect of progress.

But achieving such success and progress requires a positive vision, the appropriate determination and will to overcome the established system of the Goliaths. There is no place for fence sitting. No place for a negative mindset.

No place for allowing the old ways of emtrenched marginalisation to continue unhindered. The June 12 experience is highlighted as an example of a collectivisation that can work .

In what can pass for a manifesto Olorunfemi propounds in Politics is not a Game for Gentlemen what he terms “16 Random Laws of Politics” and these are:

1. Never underestimate the power of silence.

2. Never forget the base.

3. Never underestimate the power of influence.

4. Never forget that politics is a contest.

5. Get your timing right.

8. You must serve your way up.

9. The end of politics is action.

10. Play with emotion, but don’t get emotional.

11. Know when to pull back, never lose sight of tomorrow.

12. Disruption is not by mouth.

14. Never forget to carry your people along.

15. Politics is essentially not about right or wrong.

16. Know the laws so that you can know how to break them.

In these three books, Olorunfemi establishes himself as one willing to think out of the box as some of his positions clearly show. One would , for instance, expect that given his South West origin and attachment for June 12 and the current crop of progressives, he would align himself with their perception of federalism, fuel subsidy, and constitutional change.

That, however, is not the case as he appears willing to buck the trend but in a pragmatic and well-reasoned manner.

His passion for changing the fortunes of the downtrodden and marginalised shines through from article to article. He is also able to present his position convincingly not just with detailed facts, but also with engaging witticisms and fresh metaphors earthed in current situations and drawing from his Yoruba heritage.

One comes away seeing a genuine believer in the Nigerian project, determined to sling devastating shots at our Goliaths.

*Dr Shehu is a Nigerian activist, public intellectual and writer who has received education in literature and communication. He is also the director, International Institute of Journalism (IIJ). He has written several press articles, literary books, contributed chapters to books, edited books and journals. His main areas of interest are literature, communication and development, globalisation, African studies and creative writing.