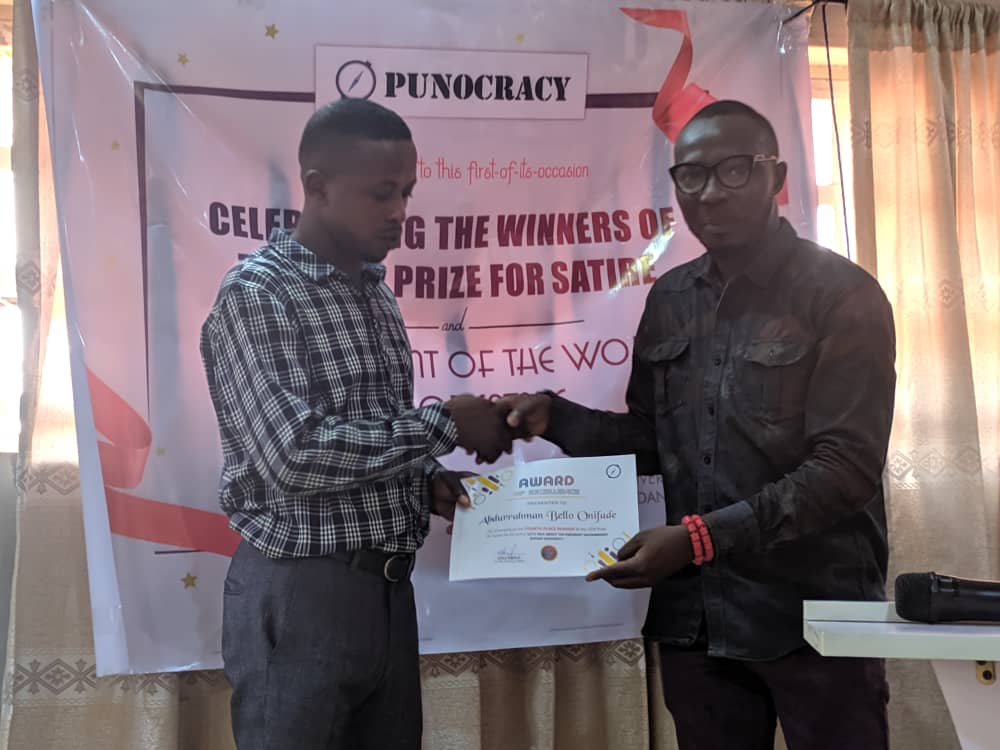 An arts platform, Punocracy, has held its maiden prize-giving ceremony for satire writing and also announced November 9 as the ‘World Day of Satire’.

Punocracy is Nigeria’s first strictly satirical platform, launched in March 2018, which was first run as a regular satirical column in the University of Ibadan by a student of the university, under the pseudonym, Tubosun Ajanaku.

The event was held on Saturday at the University of Ibadan.

The group had earlier announced the winners of the prize which was judged by James Yékú, an assistant professor at the University of Kansas, Lawrence, USA; and Oladeinde Olawoyin, an award-winning investigative journalist at Premium Times and author of the weekly column, Saturday Satire.

The winners of the inaugural prize are Jesuferanmi Igbinigie, who won the grand prize, Winlade Israel, and Funmilayo Obasa.

While delivering the welcome address on behalf of the organising team, ‘Kunle Adebajo emphasised the need for satire in the contemporary Nigerian society and the world.

He also announced the World Day of Satire was a way of recognising the importance and use of satire as a helpful tool in driving change in the society, correcting ills, and reducing political apathy.

“We could easily tell you that according to history books, November 9, 1989, was when East Germany denounced the Berlin Wall after which German citizens tore it down, and how we want the day to fit into this narrative of freedom and absence of censorship. Or we could tell you that November 9 (11/9) is actually an inversion of 9/11 and tie this to how there are always alternative, civilised ways of venting grievances … But the truth is it is just a convenient date for us.

“And one thing I’ve come to realise is we don’t need permission from history to make history,” the journalist said.

Mr Oluwamayowa then engaged the attendees on how humour or laughter can be used to trigger nationwide development. He cautioned satirists to be wary of the thin line that exists between humorous write-ups and fake news.

“Comforting the afflicted and afflicting the comfortable. That’s what satire is meant to do. If you’re doing the opposite, you’re not a satirist,” Yinka Egbokhare said.

Mrs Egbokhare spoke about how satire can be used as a tool for steering societal change.

She explained the three types of satire: Horatian, Juvenalian, and Menippean, and their various merits.

According to her, “the satirist must amplify the voices of the less privileged and provoke those at the helm of affairs in order to inspire change.”

The satirist must “comfort the afflicted and afflict the comfortable,” she said. “Otherwise you are not a satirist.”

NBA in Rivers has become “enemy of our people” – Wike