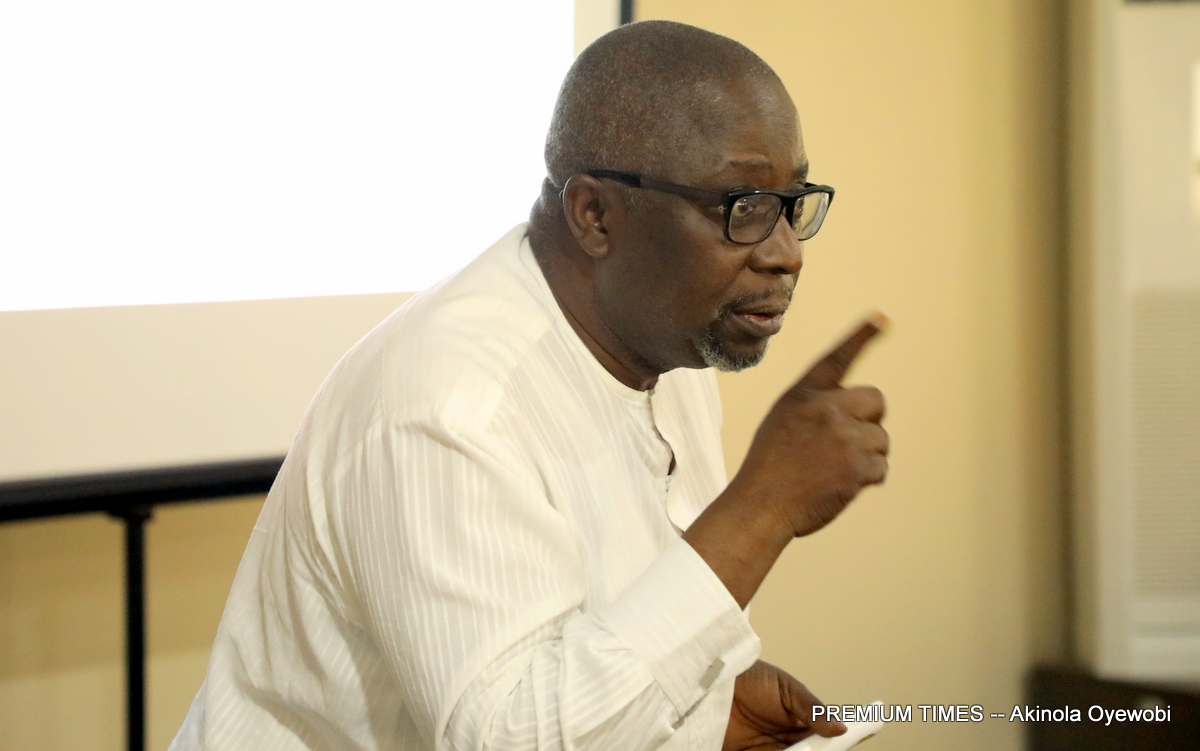 12 takeaways from the book about Dapo Olorunyomi (Dapsy), By Yomi Fawehinmi

The book, Testimony to courage, Essays in honor of Dapo Olorunyomi is a collection of essays written by over 90 writers to celebrate Dapo Olurunyomi. This book edited by Chido Onumah and Frederick Adetiba has 404 pages. Reading the book gives you a glimpse into the life of Dapsy- as he is called by his friends. Dapsy is currently the Publisher/ Chief Executive officer of the Premium Times an award-winning media organization in Nigeria. Richard Akinnola (one of the writers in the book ) called the Premium Times “ the reference point in authoritative and investigative journalism”. (page 240)

Dapsy is a bundle of talents and a very resourceful person. This is attested to by Waziri Adio who described Dapsy as ” he is at once understated and forceful, playful and serious, unassuming and cerebral, carefree and caring, approachable and cerebrally intimidating “. Also, former Governor, Bola Tinubu wrote: ” no one individual has been able to combine his kind of talent, welded together in a tapestry so uncommon yet exceptional: investigative journalist, writer, social crusader, teacher, mentor, and a soldier for good governance ” (Page 163).

I have never met Dapsy but reading this book helped me to better appreciate him. I read the book and have a few takeaways that serve as key messages

One, Dapsy is daring, bold, fearless and willing to take chances. From running a guerilla media house to standing up to the tyrants, to enabling people to escape from dictators who wanted to arrest them, Dapsy was involved in many projects that only the bold and brave can be a part of. Dapsy and his daring friends are indomitable. They had started TheNEWS, which got proscribed in 1993. Rather than beat a retreat, they started another paper called the TEMPO and continued to publish to the chagrin of the folks in power

Two, Dapsy saw journalism in a different light from most people. While others see journalism as just a career or a meal ticket, Gbemiga Ogunleye wrote ” for him, In the absence of a parliament, journalists must do everything possible to be conscience of the people. And they must do this through investigative journalism “(Page 222). Dapsy saw the journalist as a crusader for change, the voice of the people and the harness for ineffective leadership

Three, Dapsy is a man of character. Femi Falana wrote about the integrity of Dapsy. He wrote, ” Dapo remains a paragon of integrity ” page 75. The same view was repeated by Nicholas Ibekwe who wrote: ” I will remember Dapsy for two things: trust in people and professional integrity ” (page 69). Also, Dapsy is not one given to self- promotion. Many of the writers showed that Dapsy preferred to work behind the scene. Like the brain in the body, Dapsy would not be seen but his contributions cannot be ignored. And what a rare combination- an excellent worker who also avoids the limelight. Dapsy was the policy director and Chief of Staff to the EFCC- A government agency. That’s another angle to Dapsy’s life, he once worked with the government. But he left the service with a good name and had his reputation intact. One can see many of Dapsy’s peers who had served in government but didn’t represent the values that make for progress. Some even took a stance with the oppressors by keeping silent in the face of evil. I think Dapsy was lucky that he served in an anti-corruption agency. Perhaps that helped him a lot.

Four, Dapsy has a different definition of success. Like Ibim Semenitari wrote, “ Anyone who knows Dapo will know that money was the least consideration for that venture”- referring to the Premium Times. (Page 115) while Bola Tinubu wrote that Dapsy is “ Not rich in material things but rich in the volume of stories, reports and intellectual work he has done, in the lives he has touched and the values he stood for” ( Page 163). That’s a testament to a man who has chosen to be different

Five, Dapo has a rich diversity of experiences. From working in the Herald to African Guardian to African Concord to the EFCC to NEXT to the Open Society Foundation in West Africa ( OSIWA), his rich and diverse work experiences in Civil society, the private sector, and the public sector showed Dapsy as indeed a thoroughbred professional. Added to these rich work experiences are the several academic fellowships and what you get is a thoroughbred professional extraordinary.

Six, Dapsy is a developer of men. He served as mentors to many while helping others fan their passion into flame. Dapsy even helped someone to shape her thoughts when she wanted to start an NGO (page 229 ). For many of the writers of the chapters in part three of the book ( the legacy: investing in the future), Dapsy was many things to them. To Olubunmi he is the “bossless boss” while to Fredrick Adetiba, he is the ” amazing mentor, father, boss, friend…” Or Motunrayo Alaka that wrote that meeting Dapsy was ” one of the five most defining events of my life… “. How many bosses or supervisors would get such good testimonies from subordinates? Dapsy as so influenced so many people that Idowu Obasa wrote, “ Dapo is one person who has had the most significant influence in my life since adulthood”(Page 166).

Seven, Dapsy at a very young age was able to resolve an issue many media professionals struggle with throughout their career – how long will you stand with the people? For many, they started by standing with the people but due to the challenges of life and the Nigerian terrain, they got attracted to the benefits of choosing another side and abandoned the people. Reading the names of Dapsy’s co-travelers showed that many chickened out and didn’t sustain their commitment to the people.

Eight, Dapsy was clear where his allegiance lies- to the people. And he was not apologetic about it. So, while many media professionals cannot manage the balance between relating to both the oppressed and the oppressor, Dapsy is clearly for the people. Like Idowu Obasa wrote, ” TheNEWS did not promise professional aloofness or neutrality. It promised partisanship on the side of the marginalized and oppressed ” (page 166.). This is the same mandate of the Premium Times that he later founded. Former Governor Rauf Aregbesola, ( Dapsy’s friend ) wrote about the Premium Times as being “ hard on us a few times, “. ( Page 171)

Nine, Dapsy built very rich, deep and diverse relationships. His friends include former governors, activists, and media professionals. He was a lover of men. People like Dapsy don’t see anything too much to invest in their relationships or to support their friends. Like he did for his friend- Nuhu Ribadu where he effectively coordinated his ” evacuation to safety ” from Nigeria. I also respect his ability to manage the difference that comes from having friends from all sides.

Ten, Dapo is not just an activist but one that uses entrepreneurial endeavors to drive the vision he has. From starting theNews magazine with others to Tempo and then Premium times, Dapo is always willing to put his money where his mouth is. Dapsy also founded the Wole Soyinka Center for Investigative Journalism and the Premium Times Center for Investigative Journalism ( PTCIJ). Considering the number of organizations that Dapsy founded, its right to call him a “ Mediaprenuer’ ( page 265). One question I would like to ask Dapsy is that while he had started most of his earlier businesses with other people, he seems to have gone solo in the latter part of his life. Why did he abandon partnerships for Sole Proprietorships?

Eleven, while many journalists who aspire to work in corporate organizations believe that serving as the media relations officers for the organization is the only option they have, Dapsy worked for the EFCC as Chief of staff. This is a huge responsibility and he performed creditably well. This a lesson for media professionals not to keep themselves in a cocoon but expand their horizons.

Twelve, like other successful people, Dapo has had his fair share of failed projects. Perhaps one of them is the role he played in Nuhu Ribadu’ s attempt to run for the office of president in Nigeria. Osita Nwajah wrote about this in. Page 215. Such failure added to the richness of his experiences.

Reading a book of as many pages as 404 pages may be discouraging for some readers who prefer shorter text. However, you can check the table of contents as a guide to determine which chapter or authors you should read first. And since this is a collection of different articles, you don’t have to follow the Chapter sequence of the book.

A book with so many authors will likely have a diversity of styles and lengths. Odia Ofeimum wrote the longest chapter in this book, but most authors wrote between 2- 3 pages. Betty Abah ‘s chapter was even a poem. I appreciate Chido Onumah and Frederick Adetiba for putting this beautiful book together to celebrate Dapo Olorunyomi’ s birthday. I can imagine all the efforts to get this crème of writers to write and submit to meet the deadline. Beyond editing, that’s some outstanding project management skills on display. Publishing a book is perhaps one of the most befitting ways to celebrate a man who made his name as a journalist. Much more, I also want to appreciate Mr. Waziri Adio for gifting me a copy of the book.

Dapsy’s life is worth studying. Reading this book, you will realize that many of those that started with Dapsy as journalists who fought for the people as an activist and pushed for the higher ideas about leadership, development, and ethics have abandoned those causes. Some have even gone to serve in governments that were repressive or unethical or even didn’t play by the rules of democracy. But Dapsy has stayed the course, choosing the path of standing for the people and doing so with such finesse, grace, professionalism, results, and excellence.

Dapsy’s life is a testament to the value of living for the people. Dapsy served the people and this book showed many people benefited from Dapsy. I think this is a lesson for us all. Like someone wrote, “the two most important days of a man’s life are the day on which he was born and the day on which he discovers why he was born”, I think this book is a testament that Dapsy knows why he was born.