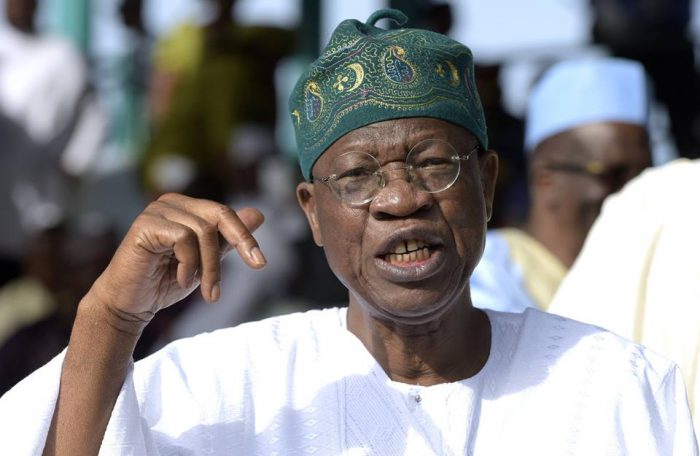 The Minister of Information and Culture, Lai Mohammed, on Sunday unveiled his agenda to transform the creative, tourism and culture industry into Nigeria’s new oil in the next four years.

The minister who disclosed the plans in Lagos at a meeting with Travel Journalists, Arts and Culture Writers Association of Nigeria said the sector would also create millions of jobs for the youth.

Mr Mohammed said it was not true that he paid more attention to the information sector during President Muhammadu Buhari’s first term. He said he would consolidate on the numerous achievements recorded and do more for the culture and tourism sector.

“There is a misconception in certain circles that we paid more attention to the Information sector than we did to Culture and Tourism.

“This may appear so because the issues we usually deal with in the Information sector are those that receive the bigger play in the media.

“But I can tell you, with evidence, that we
achieved a lot in the Tourism and Culture Sector, or in the Creative Industry generally,” he said.

Specifically, he said the ministry would finalise work on the Motion Picture Council of Nigeria (MOPICON) Bill and submit it to the Federal Executive Council (FEC).

“The plan is to create a proper regulatory environment for the sub-sector that has put Nigeria’s name on the global map, thus attracting the much-needed investment to the sector,” he said.

Mr Mohammed said he would establish the Endowment Fund for The Arts to create a legal framework for the financing of the sector and
kick-start the implementation of the parts of the Tourism Masterplan that constitute low-hanging fruits.

He said he would make the National Summit for Culture and Tourism a yearly affair, starting from the first quarter of 2020 and ensure a regular meeting of the Presidential Council on Tourism (PCT) to catalyse the growth of tourism.

Mr Mohammed said that the ministry would complete work on the establishment of Tourism Statistics and Tourism Satellite Account (TSA), working with the United Nations World Tourism Organisation (UNWTO).

He said the ministry would institute a unified National Celebration of the World Tourism Day, instead of the current situation of multiple celebrations.

The minister promised to organise a Regional Summit on Culture and Tourism, beginning from 2020, with a view to working with other countries in the West Africa sub-region to foster development of the sector.

“We will continue with our visits to tourist sites and attend as many festivals as possible across the country.

“‘We will also finalise work on and inaugurate the National Festival Calendar this year to attract more tourists, domestic and foreign, to these event,” he said..

In achieving the set goals, the minister solicited the support of stakeholders, stressing that he could do nothing without their cooperation.

Earlier, the minister reviewed what the administration did in the past four years which included the hosting of the National Summit on Culture and Tourism and the Creative Industry Financing Conference.

He said both events paid off leading to resuscitation of the Presidential Council on Tourism (PCT), the setting up of a Task Force on the Creative Industry and private-sector-led growth and development of the Industry, among others.

The minister recalled that after leading a team of stakeholders to the Inspector-General of Police, the force set up anti-piracy units in all its 36 formations and the FCT.

He said the units carried out many joint raids and seizure of pirated works, with the National Film and Video Censors Board, .

“Under this Initiative, you can get a loan ranging from three million Naira to N500 million for movie production, movie distribution, fashion, music, etc.

“Remember, gentlemen that this happened after I also led a team of stakeholders to meet with the CBN, upon the recommendation of the Creative Industry Financing Conference.

“Under the latter, we trained over 100 Festival Managers in Lagos, Abuja and Accra.”

Mr Mohammed said that the ministry re-engaged fully with the UNWTO and the efforts paid off as Nigeria was awarded the hosting right of the 61st UNWTO CAF Meeting and elected as Vice President, Africa, at the 22nd General Assembly of the organisation in China.

He said as part of efforts to attract attention and infrastructural development to tourist sites, his team visited a number of such sites across the country and also attended many festivals.