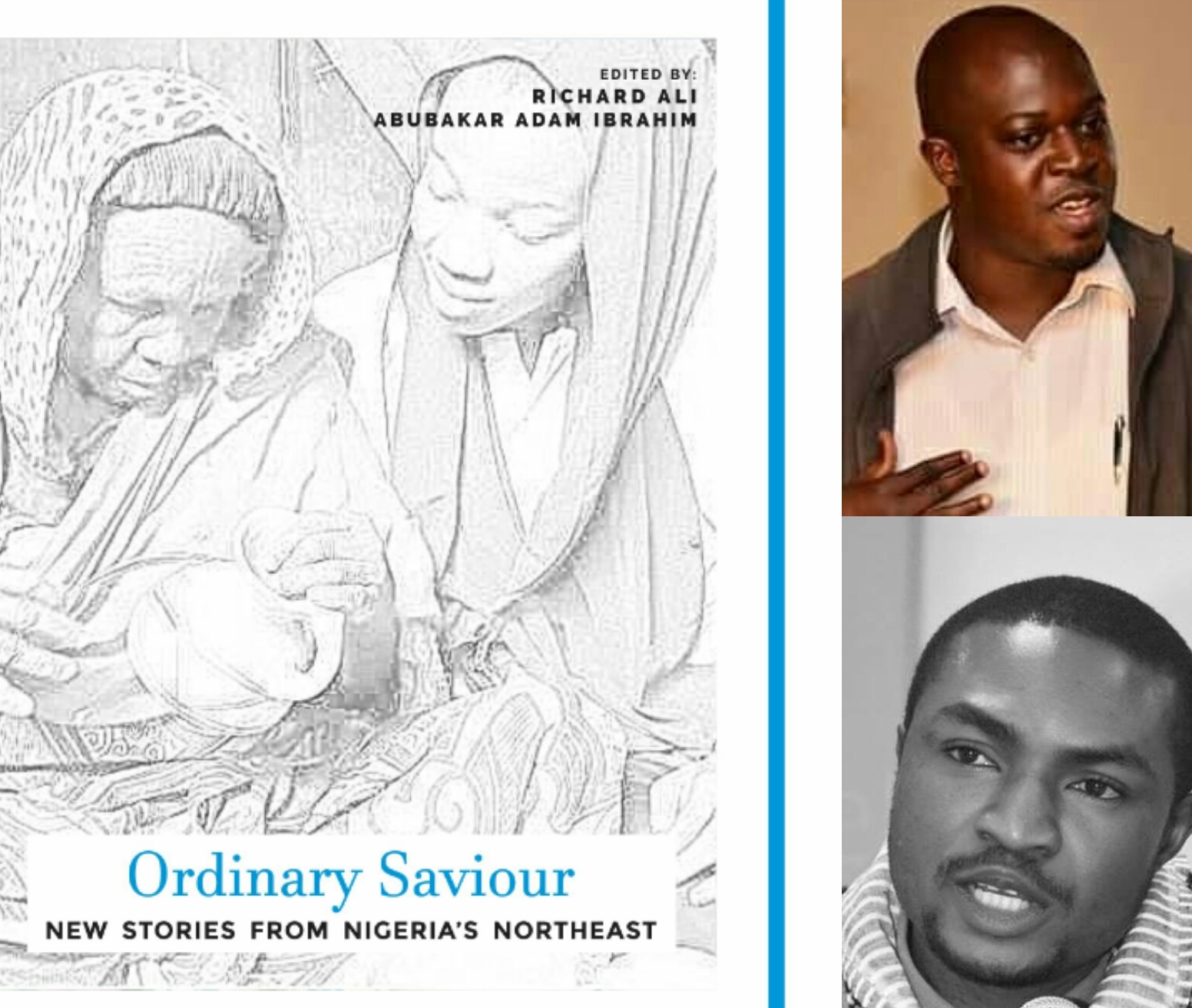 Ordinary Saviour is an anthology of short stories edited by Richard Ali and Abubakar Adam Ibrahim. Comprising eleven stories written by the Northeast Regional Initiative’s NEIEF Fellows, the collection provides a voice for local experiences of the conflict as well as counternarratives.

It was published by Parrésia Publishers Limited for NERI. It was publicly presented on August 29 at Newton Park Hotel, Abuja. Amended text of the Foreword as read by Richard Ali.

Stories, by their very complex nature, are the essence of our experiences and perceptions. Their relevance to the evolution of homo sapiens as a species can scarcely be quantified because the role stories play in shaping and documenting our social and cultural evolutions, our perceptions and histories, cannot be collected into data or statistics and presented in colourful infographics.

Here, in Africa, stories have always been vehicles for cultural orientation, socialization and moral instruction.

In recent years, the importance of stories has been demonstrated by the influx of journalists, foreign and domestic, into Nigeria’s northeast, to capture the Boko Haram crisis in that region and project them, in the form of news stories, to the world.

Yet, before Boko Haram, there were stories in the northeast. There were, and have always been, beautiful and proud people of various tribes and faiths on those plains, whose colourful and flamboyant attires have only been matched by their achievements, who have lived and loved and built cultures, kingdoms and empires. There have also been merchants of some of these stories, with writers like Zaynab Alkali having held the torch for the people of that region, and for women especially.

Over the years, the dimension and scope of these stories have only become amplified and more layered, their nuances have become more intricate as numerous factors have come into play; imported fanaticism and weapons have met indigent people who have, for years, remained at the basic level of existence and have, by virtue of this, been left exposed and vulnerable. At the bottom of the Boko Haram conflict is the ways indignation, arising from years of neglect and poverty, can claim the centre stage in devastating, fatal ways.

The devastation wrought by Boko Haram has rewritten the narrative of northeastern Nigeria, this time with blood and gore. The story that the extremists have insisted on telling has drawn the attention of the world’s press to cities like Maiduguri, Bama, Yola, Chibok, Dapchi, Buni Yadi and others. The stories these journalists have told is one of heartbreak, against the backdrop of burning villages, with a soundtrack of rifle fire. These are, of course, valid stories. They are, more often than not, true narratives.

Yet, what cannot be overemphasised is the necessity for the targets of this unfortunate experience with fundamentalism to take ownership of the narrative. To share, in their own words, their stories. Only through this will the nuances, the finer threads of their existence, culture and identity, which have shaped this conflict and its fallout, be highlighted in the grand tapestry of truth.

The stories contained in this concise anthology have been written mostly by people from northeastern Nigeria, who have chosen to use fiction as a vehicle to convey the nightmares, dreams and hopes of the region. The fact that the vast majority of these writers have never attempted fiction writing before, and have never been published before, demonstrates the urgency of the stories they tell in this anthology.

Also, for these stories to have taken this shape, within the short period of intensive tutorial and mentorship they have had, is a credit to the writers and their zeal to learn and grow, but most importantly, to be the drivers of a new narrative of the northeast.

In these stories, aspects that have often been missed by the media in the haste to rush to press with their stories are highlighted. Dreams and their fundamentals, hopes and their essence, and the permanence of the resilience of regular people wafts strongly, like the velvety fragrant smokes of frankincense the region is famous for.

It is important to draw attention to this anthology within the larger sphere of preventing and countering violent extremism (PCVE) as well as counterterrorism strategy. There has been some academic positions that have wondered if PCVE is any different from propaganda.

It is our opinion that while these positions and others are academic, PCVE is actually about people. It is, precisely, about the real people victims of misguided ideologues, who the storytellers of Ordinary Saviour have brought to life, even if in fiction.

It is Rosaline in Suzanne Myada’s story that gives a name to the anthology, Rosaline who flees the village to the city certain that everyone must know her aunty Hadiza’s house. It is ASP Mohammedali who, in trying to be a good man in a difficult place, makes hard decisions and flirts with extrajudicial acts inimical to his standing as a law officer, and the hollowness of his victory. It is the woman with two sons fleeing conflict, split in a second, who wind up in safety in two different ends of the country in Adaku Usigbe’s story. It is belaboured Filolo, who tries so hard to settle the conflict between a sedentary farmer and a pastoralist herdsman and yet fails. It is the young man in Adamu Galadima’s story who is failed over and over again by his society, incarcerated, who, at the end of it all, wants revenge. And our point is that PCVE is about people, and that while it has emerged as a field of study and expertise, it must remain about people until such a time that we would not need special designations such as PCVE or CT nor specialist study. But, until such a time, PCVE is necessary and literature, such as this anthology Ordinary Saviour, has an important role to play in confronting extremism and normalizing our societies.

In your hand, dear reader, is a treasure, hopefully the first of many gems, not because of its high art — for that is not what this collection aspires to — but because of the scope of its ambition and the courage of its vanguards, the writers who have become pioneers on this path that, hopefully, would only grow wider with the passage of many more merchants of stories from the northeast.
With the passage of time, the significance of this work will come through. For now, it would suffice to immerse yourself in it, in this world that, pockmarked with bullet holes, punctuated by tears and loss, has through sheer doggedness, refused to fold unto itself. This, right here, is the stuff triumph is made of. These are stories that need telling. Thank you.

***Richard Ali made the above introductory remark at the public presentation of Ordinary Saviour in early September.

France pledges to increase aid to Africa for girl child education, others