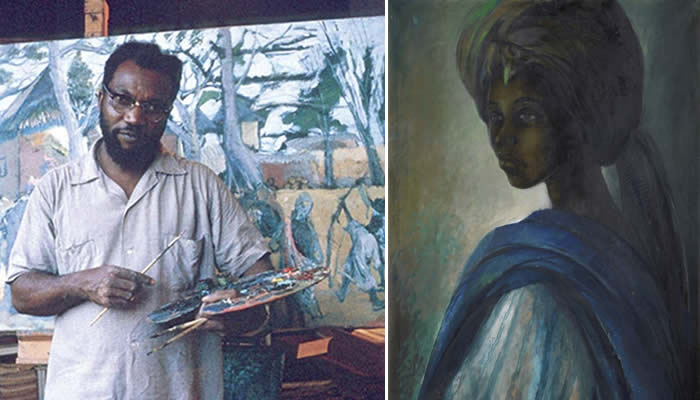 Tutu, the famous work of renowned Nigerian artist, Ben Enwonwu, that was recently found in a London home, was sold for an African record of £1, 205,000 on Thursday, BBC reports.

The iconic portrait is a 1974 painting of Adetutu Ademiluyi, an Ife royal princess, and was auctioned in London at 101 New Bond Street London at 5.00 p.m. London time.

It was also auctioned in Lagos at Wheatbaker Hotel, Ikoyi, at 6.00 p.m. Lagos time simultaneously.

Many art aficionados thronged the Lagos venue of the sales at the same time the international buyers found their way into the Bonhams venue in London.

It was the first time Bonhams would simultaneously transmit a live broadcast in Nigeria and at the same time sell a ‘Contemporary African Art’ in the evening.

Bonhams is a privately owned international auction house in the UK.

Founded in 1793, it is one of the world’s largest and most renowned auctioneers of fine art and antiques, motorcars and jewelry.

Although more than 90 African works by Nigerian, Ghanaian and Mozambique were auctioned for high amounts, Enwonwu’s painting was sold for the highest price. It set a new record for African art.

The painting, ranked by arts collectors with Mona Lisa, was done by Nigeria’s renowned artist, late
Ben Enwonwu in 1974.

Bonhams announced the record price for the paint, which measures 97 x 66.5cm and was signed by Enwonwu and dated 1974.

The identity of the buyer of the Lot 47 has not been disclosed yet.

Bonhams says on its website that Ben Enwonwu’s portraits of Tutu have achieved a high level of celebrity because the paintings were some of the most enigmatic works produced by a Nigerian artist in the 20th century.

The artist, regarded as the founding father of Nigerian modernism, painted three versions of Tutu and the image became a symbol of national reconciliation. But all three were lost and became the subject of much speculation.

The paintings gained fame not only for their beauty but also for their disappearance. The discovery is partly thanks to the efforts of Giles Peppiatt, Director of African art at Bonhams, who for years made it his mission to find the paintings.

At the auction, he said, “The portrait of Tutu is a national icon in Nigeria and of huge cultural significance. It is very exciting to have played a part in the discovery and sale of this remarkable work.”

The Nigerian novelist, Ben Okri, said Enwonwu was already world-renowned as the greatest living African artist when, in the summer of 1973, three years after the end of the Nigerian civil war,
he encountered the princess and was entranced, asking to paint her portrait.

Enwonwu was a student at Goldsmiths, Ruskin College, Oxford, and the Slade in England in the 1940s.

He became more widely known when he was commissioned to create a bronze sculpture of the Queen during her visit to Nigeria in 1956, a work that now stands at the entrance of the parliament buildings in Lagos.

However, Tutu is regarded as his greatest masterpiece – the image was on display at his funeral in 1994.