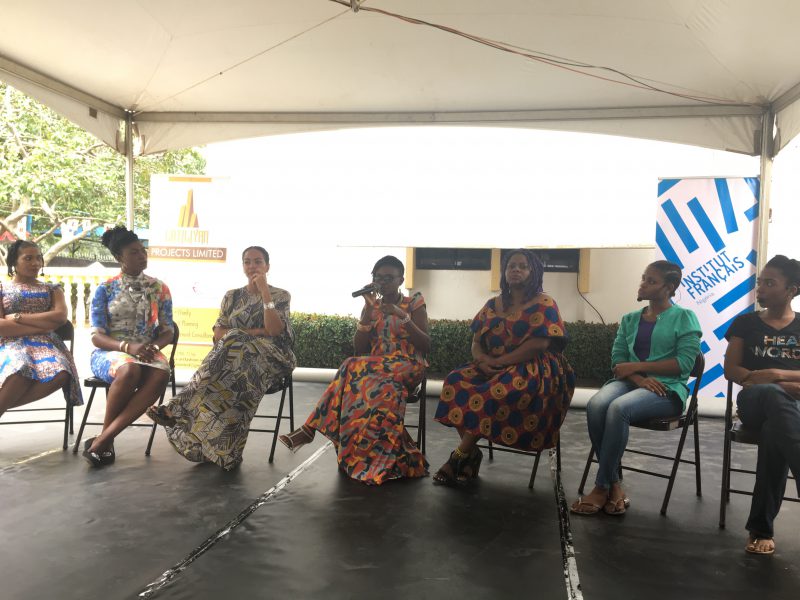 After a 45-minute performance of vignettes from the play, ‘Hear Word!’ Tobore Ovuorie, the investigative journalist who moderated the audience discussion at Institut Français in Abuja on Tuesday, asked the men in the audience to answer what they mean when they ask women to submit.

“I felt the question was unnecessary,” said Brenda Ogbukaa, who was an audience member.

“The play is about women understanding their own power, asking men that question was diverting the attention,” Ms. Ogbukaa, 27 added.

Hear Word! as it was presented at the Institut Français, highlighted a gamut of issues Nigerian women face regularly.

These include sexual assault, human trafficking, and domestic violence and they were the dominant themes of the performance.

Throughout the hour-long discussion, many who spoke addressed the issue of women’s submission in Nigerian culture and the roles both men and women play in disempowering women.

The event was attended by many women from various sectors in Nigeria. Additionally, a group of 60 women were transported from markets and Internally Displaced Persons, IDP camps all over Abuja.

“We want them to go back and feel strong and feel free to express themselves about issues they cannot talk about,” said Cathy Amato, CEO and Co-founder of Latiliyan Projects Limited – the NGO that co-sponsored the presentation of the play alongside the Institut Français.

A respondent, Ngozi Okechukwu, expressed frustration with the idea that submission is at odds with female empowerment.

For her, “gender equality is not about women taking over. It’s about giving us opportunity to have our own thing.”

The Director of Hear Word!, Ifeoma Fafunwa, said that African women have been financially independent, historically. She added quickly that “this thing toward submission or helplessness is westernization influence.”

Victoria Daniel, a mother of four who currently lives in New Kuchingoro IDP camp said that, like one of the characters in the play, she has also suffered domestic abuse at the hands of her husband.

“I gained a lot coming here,” said 25-year-old Mrs. Daniel. “They have given me some knowledge and wisdom on how to survive, how to make it and have my own ‘something’,” Mrs. Daniel said.

Susie Iliyian, co-founder of Latiliyan said the organisation plans to follow-up with all the women who attended so as to assist them to acquire skills that could help them become more financially independent.

“This is not a space where we just complain,” Ms. Illiyian enthused. “We created this event to expose these issues so that men and women can find solutions in our society.”