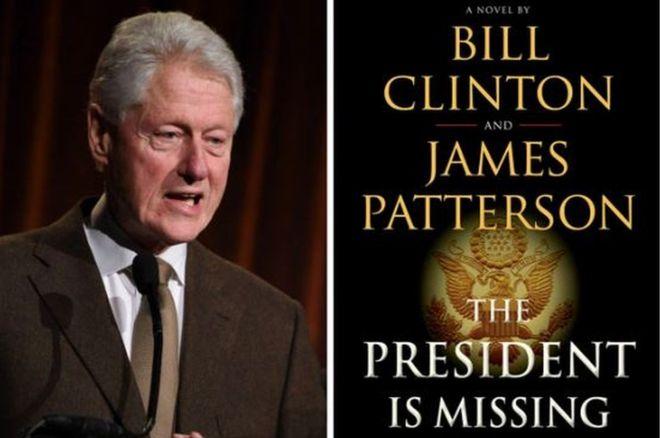 When news broke recently that former US President, Bill Clinton, in collaboration with James Patterson, best-selling author for many years, is writing a novel, it generated massive interest around the world. The novel about the White House is ‘The President Is Missing.’

Presidents and ex-presidents have been churning out books over the years; novels are rare. But that extraordinary combination of talent, experience and influence of the writers is the coup, considering that the announcement effect alone has made it a must-read, long before it is published in June, 2018.

The announcement was made in a statement on Monday by publishers, Alfred A. Knopf and Little, Brown and Co., who stated that the book will be informed by details that only a President can know.

The book, which is Clinton’s first novel, will be released by Alfred A Knopf and  Hachette Book Group, the parent company of Little, Brown in June 2018.

The publishers called the book “a unique amalgam of intrigue, suspense and behind-the-scenes global drama from the highest corridors of power. It will be informed by details that only a president can know.”

Knopf has long been Clinton’s publisher, and Patterson has been with Little, Brown for decades but “The President is Missing” is the first work of fiction by Clinton, whose best-known book is the million-selling “My Life.”

Clinton’s previous books include Back to Work: Why We Need Smart Government for a Strong Economy and Giving: How Each of Us Can Change the World.

Patterson’s popular series include the “Women’s Murder Club” and “Alex Cross,” as well as “NYPD Red” and “BookShots,” the latter of which is centered on super-short thrillers that are 150 pages or less.

“Working with President Clinton has been the highlight of my career, and having access to his first-hand experience has uniquely informed the writing of this novel,” Patterson said in a statement.

“I’m a storyteller, and President Clinton’s insight has allowed us to tell a really interesting one. It’s a rare combination; readers will be drawn to the suspense, of course, but they’ll also be given an inside look into what it’s like to be president.”

“Working on a book about a sitting president — drawing on what I know about the job, life in the White House and the way Washington works — has been a lot of fun,” Clinton said in a statement. “And working with Jim has been terrific. I’ve been a fan of his for a very long time.”

The details of the plot are not currently known, but the two men have announced plans to hold a national book tour to promote it. Financial terms for the novel, which the authors began working on in 2016, were not disclosed.

Former occupants of the White House have written books, but not a novel. One report calls this Clinton-Patterson adventure a thriller.

A political release from the 1990s had a similar arrangement: Random House and Simon & Schuster jointly published the non-fiction All’s Fair by husband-and-wife campaign consultants James Carville and Mary Matalin.

Jimmy Carter, who has been writing since leaving the White House, released the historical novel The Hornet’s Nest in 2003, and the daughter of Truman had a successful career with her Capital Crime mystery series.

But The Missing President is a whole new level. “This unprecedented collaboration with its compelling mix of insider knowledge and edge-of-the-seat suspense is utterly irresistible,” said Susan Sandon, divisional managing director at Penguin Random House.

There is no clarity about the roles of the co-authors of The Missing President. The announcement however said that the novel will be “co-written, co-edited and co-published.”

Patterson doesn’t normally write his novels alone. He is responsible for the vision and plotline of each novel and series but he gives a detailed outline to the hired writer, with who he usually shares authorship. Patterson reads, revises and demands new drafts until he is satisfied.

Clinton writes himself. It is said he actually wrote the text of his autobiography, My Life – with help from three collaborators. He indeed has writing assistants. But it is not known how well he can write fiction. That is where the master, Patterson, comes in.

In a recent interview he explained writing with co-authors is not markedly different from writing solo. He said, “It’s not terribly different, in the sense that I only work with people who understand that, ultimately, the end product has to be a book that I’m delighted to put my name on. Which means fast-paced, good writing. I always go for highest common denominator. I mean, I write popular fiction, but I only want to write good popular fiction. The books I do myself involve several drafts. The first thing I’ve got to do is get the story right. If you polish too early, there are chapters that you love that really shouldn’t be in the book, or paragraphs that you love that shouldn’t be in the chapter, or sentences that you love that really shouldn’t be in the paragraph. I always find it best to get the story down first, and then you can polish forever if you want to. I tend not to do that, but you could.

With the co-writing, I’ll write a long outline, anywhere from 60-80 pages, and pretty much every chapter is dealt with, at least 80 percent of the chapters. I then ask the co-writer to contribute to the outline. For two reasons: two heads are better than one, but I also want them to feel that they’re part of the process, that they’ve contributed throughout, even early on with the outline. I then ask that I see pages every few weeks. Unlike with the publisher, a year later or 18 months later you turn in the manuscript, and they might say, “Well, that isn’t quite what I expected!” It isn’t like that. I think it’s better, every couple of weeks, to get some pages and talk. Sometimes it’s just “This is terrific, I love the way it’s going,” and sometimes it’s “We’ve come off the tracks somehow.” If I don’t like the characters or if I’m finding it predictable—if I know where it’s going, then I won’t want to read anymore. Ultimately, when I get the full draft from the co-writer, I’ll then polish and/or write several more drafts myself, depending.”

James Patterson led the 2016 world highest-paid authors, compiled by Forbes. In fact, he has made a permanent home of this spot since 2001, except in 2013, when he was overthrown by 50 Shades of Gray author, LJ James. So it is no news he leads the highest paid authors even when his earning is $75.5 million more than second-placed Jeff Kinney.

In 2016 he co-authored seven novels with seven different writers. Humans, Bow Down, released on August 1, 2016, was written with Emily Raymond.

In it humans are endangered species in a world run by machines. The Great War is over. The Robots have won. Humans can either submit and serve the vicious rulers they created, or they can be banished to a desolate, unforgiving landscape where it’s a crime to be human. With nothing left to lose, a feisty young woman seeks to save humanity before the robots wipe humans off the face of the earth, once and for all.

Patterson has created more enduring fictional characters than any other novelist writing today with his Alex Cross, Michael Bennett, Women’s Murder Club, Private, NYPD Red, Daniel X, Maximum Ride, and Middle School series. As of January 2016, he has sold over 350 million books worldwide and currently holds the Guinness World Record for the most #1 New York Times bestsellers. In addition to writing the thriller novels for which he is best known, he also writes children’s, middle-grade, and young-adult fiction and is also the first author to have No.1 new titles simultaneously on the New York Times adult and children’s bestsellers lists.

On how he picks his co-writers, he said, “In a lot of cases it’s people that I’ve known and just feel I can work with. I like writers who can write scenes, and who are willing to listen to reason, then I can work with them. I have a lot more trouble writing with Hollywood screenwriters, who always feel that they know a better way to do it than I do. Somebody gives them War and Peace to adapt, and then two weeks later they give them their “take” on it.”

Publishers of The Missing President did not call it a faction or a non-fiction novel, a genre that is dying anyway. Faction is described as a literary genre which, broadly speaking, depicts real historical figures and actual events woven together with fictitious conversations and using the storytelling techniques of fiction. The non-fiction novel is an otherwise loosely defined and flexible genre. The genre is sometimes referred to using the slang term “faction”, a portmanteau of the words fact and fiction.

Since the ’70s, the non-fiction novel has somewhat fallen out of favor. However, forms such as the extended essay, the memoir, and the biography can explore similar territory.

The fictitious treatment of reality may however not be new. In 2008, Curtis Sittenfeld wrote American Wife, which was a fictionalized version of the life of former first lady Laura Bush.  Sittenfeld has reportedly secured a deal with Random House to do a fictional retelling of the life of Hillary Rodham Clinton.

The genre promises to be one that will be explored and mined aggressively in the coming years.

TRAVELOGUE: A trip to Vegas, the city of allure, sin and gambling, By Folu Olamiti