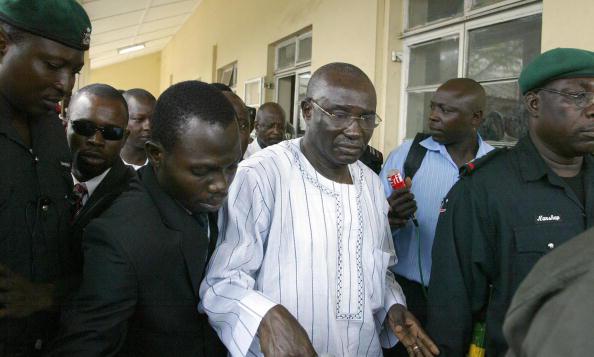 FILE PHOTO: Former Army chief General Ishaya Bamaiyi (C) is led out of the courtroom after regaining his freedom of attempted murder charge at the Ikeja High Court in Lagos on April 3, 2008. A Lagos high court has discharged and acquitted General Bamaiyi, former Army Chief during the dictatorial regime of General Sani Abacha, who has been standing trial on four counts of attempted murder since 1999. AFP PHOTO/PIUS UTOMI EKPEI (Photo credit should read PIUS UTOMI EKPEI/AFP/Getty Images)

Former Chief of Army Staff, Ishaya Bamaiyi, says he has written a book, titled “Vindication Of The General” to correct “misinformation” about his role during the regime of former dictator, Sani Abacha.

Mr. Bamaiyi, who was charged in 1999 with the attempted murder of the publisher of the Guardian newspaper, Alex Ibru, is seen as one of the henchmen of the 1993-1998 Abacha regime.

He was discharged and acquitted on April 2, 2008 after nine years in detention.

“I have written a book for people to know what really happened to me during my active service inside and outside government,” he said when he received Deputy Senate Leader, Bala Ibn Na’Allah, who paid him a condolence visit on Sunday in Zuru, Kebbi State, over the death of a relation.

He said the date for the book launch will be made public as soon as all arrangements are concluded.

He used the opportunity to advise elders and youth of his native Zuru emirate to desist from acts that have brought political, social and economic underdevelopment of the area.

“Eight people expressed their desire to aspire for governorship from the emirate during our agitation for power in 2015 and the emirate was asked to produce a governor.

“At the end of the day, three that emerged as aspirants did not make it.

“Your religion is between you and your God and not with a fellow human being,” he said.

He expressed appreciation to the Deputy Senate Leader for the visit and the long standing relationship.

“Na’Allah has been in the team of my lawyers during my trials,” he said.

Mr. Na’Allah condoled Mr. Bamaiyi, his family, the people of Zuru and Kebbi State over the loss.

“I have made it a duty that whoever has a hand in making me what I am today will always be remembered and carried along,” he said.

Late Habila Andrew Nama, Mr. Bamaiyi’s relation, died in Port Harcourt after a protracted illness. He is survived by a wife and three children.