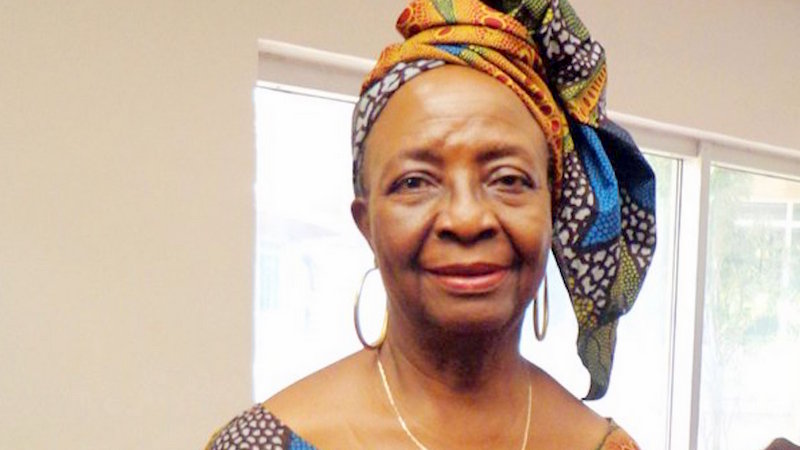 Omolara Ogundipe-Leslie: Between the Literary, the Feminine and the Cultural

My experience of literature has always been as a medium for experiencing life. From Shakespeare to Achebe, and from Wole Soyinka to Bertolt Brecht, literature provides an imaginative retelling of life and its many vicissitudes. But literature has also been a vehicle for social transformation. Chinua Achebe’s entire literary oeuvre has a postcolonial rationale that aimed at rescuing the African from a Eurocentric cultural ideology. We are all familiar with his masterly critique of Joseph Conrad and his famous work, The Heart of Darkness which, for Achebe, reveals a man with a highly ingrained racial sensibility. Wole Soyinka suffuses his poetry and plays with a combination of cultural and social themes that aimed at the transformation of anomie, for instance.

Chimamanda Adichie, Buchi Emecheta, Flora Nwapa, Lola Shoneyin, Mabel Segun all these and so many others have something in common—they are all female Nigerian writers, a blend of the old and the new, who have turned literature into a vibrant vehicle for rethinking and restructuring gender relations within an extremely patriarchal context like the Nigerian society. Through essays, fictions and factions, these writers have turned their creative fame into an engaged platform for active social advocacies. In the essay, “We Should All Be Feminists” (2014), Chimamanda Adichie provides a long exhortation on why the gender inequalities and injustice in our society today require a collective burning anger that will bring about a transformation. “My own definition of a feminist is a man or a woman who says, yes, there’s a problem with gender as it is today and we must fix it, we must do better. All of us, women and men, must do better.”

Today, I celebrate a woman who has dedicated her entire life to ensuring that the gender issue receives sufficient engagement to push it into the collective consciousness. Molara Ogundipe belongs to the old core of literary intellectuals who weaves the intellectual and the literary as the combined dynamics that unfold the hidden assumptions and dangerous groundings for gender relations in any patriarchal setting. Molara Ogundipe is a professor of comparative literature and gender studies. It would seem for her that gender is too much of an issue to be left only to logic. Patriarchy is not logical. On the contrary, gender relations and the injustice that it instigates derive from a social misunderstanding of the biology of sexual differences. Gloria Steinem, the US writer and feminist, illustrates graphically: “What would happen if…men could menstruate and women could not? Clearly, menstruation would become an enviable, boast-worthy, masculine event: Men would brag about how long and how much. Young boys would talk about it as the envied beginning of manhood.” It is in this sense alone that everything feminine has been turned upside down into a demeaning metaphor for weakness and inferiority. And all these despite the unassailable achievements of womanhood all across the globe and throughout all history— from Moremi, Funmilayo Ransome-Kuti, Winnie Mandela, Joan of Arc, to Rosa Parks, Margaret Thatcher, Queen Amina of Zaria, Margret Ekpo, Wangari Maathai, Taytul Betul, Huda Shaarawi, and so many other females who defied the biologising of social relations and threw their hopes, aspirations and dreams against a patriarchal system that undermines their humanity as women.


Molara Ogundipe is at the forefront of the theoretical dynamism which is unfolding within African feminism. And she has a powerful and deeply ingrained cultural understanding of the dynamics of gender relations in the pre-colonial and colonial Yoruba society as a pivot for theory.

In the hand of Professor Molara Ogundipe, literature in its comparative depth becomes a cross-cultural armament for outlining diverse cultural tropes that combine history and culture within a literary matrix for unraveling gender and its terrible assumptions. Thus, the many literary studies, poetry and stories of Molara Ogundipe become the instrument by which women could be allowed to “recreate themselves” away from cultural, social and even theological strictures that limit the possibility of what a female can ever hope to become in a male-dominated world. Tertullian, the Carthaginian theologian, gives this limitation a theologian justification: “And do you know that you are an Eve? God’s sentence hangs over all your sex and His punishment weighs down upon you. You are the devil’s gateway; it was you who first violated the forbidden tree and broke God’s law…You should always go in mourning and rags.”

All these imply that the prejudices against the feminine goes deeper than what mere intellectual bantering can unravel. We need serious arguments that peel away at the layers of prejudices and biases. And Professor Ogundipe has a turgid framework of arguments, at the intersection of the postcolonial, the continental and the diasporic, that outline Africa’s cultural experience as the basis from which to transform the feminine experience. Professor Ogundipe is not just a critic of masculine excesses. She is not just a poet that laments the imminent loss of femininity. She is also an activist-creator buoyed by an optimism of a renewed understanding of what it means to be a woman within an African cultural context. Molara Ogundipe’s literary, intellectual and cultural sensibilities are geared towards a recalibration of what feminism can be transformed into in Africa.

It is no longer news that global feminism is caught within several contradictory ideologies that, in the final analysis, harm the advocacy for gender equality across history and contexts. Take racism, for instance. The racist ideology is so powerful that it cuts right through any supposed solidarity between the white and the black women in terms of gender alliances. The origin of black feminism derives from the critical attempts at undermining racism in the feminist struggle. On the other hand, African feminism has equally become a powerful framework for untangling the cultural differentials between continental black women and African American women. And Molara Ogundipe is at the forefront of the theoretical dynamism which is unfolding within African feminism. And she has a powerful and deeply ingrained cultural understanding of the dynamics of gender relations in the pre-colonial and colonial Yoruba society as a pivot for theory.


Stiwanism, in Molara Ogundipe’s fertile imagination, takes off from the need to retrieve female dignity and agency, into a larger continental reform of institutional restrictions, in a way that could generate development insights founded on conscious relationship with other traditions across the world.

Within her multiple engagements with gender, rethinking female subjectivity would seem to constitute a significant part of the project of rethinking the feminine, especially within an African postcolonial context. This would require an active advocacy that goes beyond just critiquing. Her answer to such an optimistic project is found in her concept of “Stiwanism”, the acronym for “Social Transformation Including Women.” This is a concept rooted in the radical heritage of Molara Ogundipe, enriched by her Yoruba cultural background, Christian upbringing and educational consciousness. Even within the accommodating ambience of the Yoruba culture and the Christian theological context, women still faced an uphill task of expressing themselves. These cultural and spiritual restrictions provided confusing food for thought for the young Molara Ogundipe, and an eye-opener for a future exploration of what it means to transform the social conditions of women in Africa. Thus, “Stiwanism” is a conceptual nod to the complexities of understanding the transformation of the society and of women as significant part of that society. Take a point of methodology, for instance. According to Professor Ogundipe, women’s identity cannot be understood properly within what she calls a “dichotomous” framework that neglects all the possible statuses a women could acquire within a cultural context, apart from being a wife in a marriage. For her, this requires new analytic tools that could enable “feminist reconstructions and transformations of family patterns and society.”

We therefore immediately see where Ogundipe’s understanding of feminism is headed – a keen understanding of the inherent institutional advantage of patriarchy, and how social transformation itself can only become meaningful if it is accompanied by significant institutional reforms that empower women to recreate themselves. The reform potentials of Stiwanism appeal to me as a reformer. In my critical odes to female achievers in Nigeria, I have been concerned about the many institutional avenues by which reforms could include women as development agents. Stiwanism is refreshing as a positive reform construct because it is not founded on a binary opposition which underlies most feminist advocacy for gender equality. On the contrary, it actively seeks for masculine collaboration in the institutional reconfigurations of social transformation. Stiwanism, in Molara Ogundipe’s fertile imagination, takes off from the need to retrieve female dignity and agency, into a larger continental reform of institutional restrictions, in a way that could generate development insights founded on conscious relationship with other traditions across the world.

It is only very apt to end with a feminist fundamental assertion. For Mary Daly, “The liberation of language is rooted in the liberation of ourselves.” With her comparative literary experiences and her many essays on gender relations and cultural contours of the feminine in Africa, Abiodun Omolara Ogundipe—poet, literary critic, feminist, theorist, educator and activist—has provided an intricate intellectual oeuvre which can enable African feminists to commence a significant transformation of the language of gender relations, a feminist reconstruction of gender, family and society that is critical for individual, national and continental development.

Buhari presents N7.28 trillion “Budget of Recovery and Growth” to National Assembly for 2017