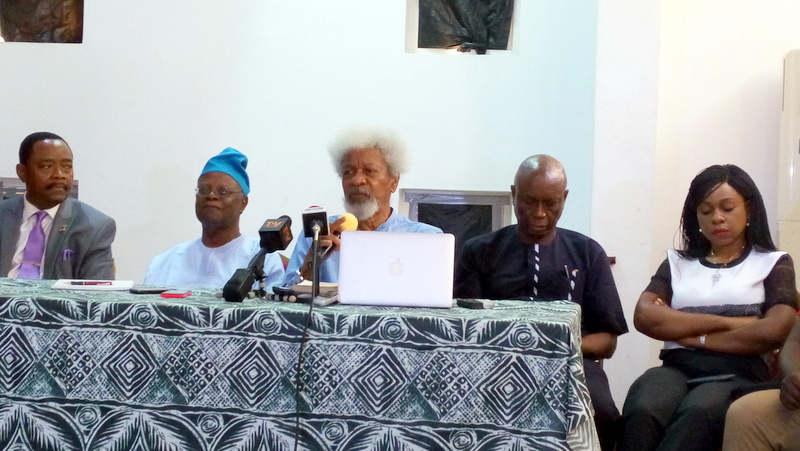 Soyinka denies ‘Lagos at 50’ celebrations will run for 12 months

The “Lagos at 50” planning committee on Wednesday debunked reports in the media that the celebration will run for an entire year.

The “Lagos at 50” celebration is a series of socio-cultural and political events lined up by the Lagos State government to celebrate 50th anniversary of the creation of the country’s commercial capital. Lagos State was created on May 27, 1967.

Co-Chairman of the planning committee, and Nobel Laureate, Wole Soyinka, told journalists at a press conference in Lagos that some group of people had put out a paid advertorial in newspapers with misleading information about the scope of the “Lagos at 50” celebration.

Describing the claim as “dishonest” and a “dangerous trend,” Mr. Soyinka said there was no time the planning committee put out information that events would run for everyday for a year.

“If Governor Ambode wanted to celebrate the whole year round, I’ll carry a placard and ask for him to be impeached,” he said.

He said rather than spread falsehood about scope of the celebration people should “wait until events are proposed and advertised”.

“We have our projections and we have asked the government to tell us what they think,” he said.

Some prominent Lagos indigenes under the aegis of the Eko Foundation had kicked against the composition of the planning committee and the appointment of Mr. Soyinka as co-chairman.

The group, led by a former Lagos commissioner, Oluwole Smith, said the appointment of Mr. Soyinka, who is originally from neighbouring Ogun State, was wrong and unacceptable.

Mr. Smith, a professor, argued that the state government marginalized true indigenes of Lagos State by appointing Mr. Soyinka as co-chairman of the planning committee.

However, on Wednesday, Mr. Soyinka suggested that the opposition to the composition of the committee maybe as a result of the wrong insinuation that the committee has “a pot of gold” from which to celebrate the whole year round.

He said apart from funds provided for the inauguration of the committee, no fund had been disbursed to the committee.