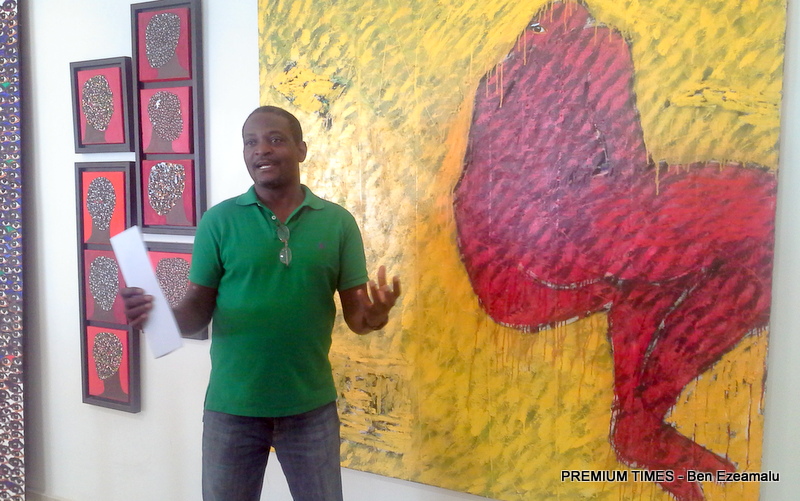 An exhibition of the latest works of Nigerian contemporary artists, Rom Isichei and Kainebi Osahenye will open to the public on March 23 at Temple Muse, Lagos.

The exhibition, a collection of 35 paintings and mixed media works, shows an intense exploration of colour, style, scale, and technique by the two internationally recognised experimental artists.

“At other times, we see a master painter at work, using intricate lines and strokes which are more classical in nature. His subjects look contemplative, while inhabiting a world of red energy which is expertly juxtaposed by quiet reflective gazes.”

Mr. Isichei’s broad stylistic diversity is also seen in four unique archival prints from his deification series in which he is presents faces created out of found objects such as corks, wire, plastic plates, clips and even a cleaning mop, over which he paints and drizzles with an intense abandonment.

“The deification series are mixed media, enhanced archival prints that reference themes of consumerism, excess, and object transmutation which negotiate between local and global culture,” says Isichei, a graduate of Fine Arts at the Yaba College of Technology.

“The works I’m showcasing in this exhibition are as varied in stylistic narrative, as they are in idealistic representation. Mostly figurative in composition, they embody anecdotal stories that reflect our shared experiences of self-obsession and the search for the beau ideal, delusion and fond hope, felicity and sociability.”

Mr. Isichei’s works are juxtaposed with Mr. Osahenye’s intense exploration of the human condition through intricately layered, small and large collages of hundreds of eyes which have been cut out of paper and stuck across canvases painted with acrylic, enamel, and spray paint.

“Moving away from his usual large scale installations of found objects including water bottles, burnt, crushed and flattened beverage cans, the artist for the first time is showing a series of much smaller works,” she says.

Mr. Osahenye, who also studied at the Yaba College of Technology where he majored in Painting, has taken part in numerous international residencies, including the Harmattan Workshop led by Bruce Onabrakpeya.

He describes his works as arts which relate to the environment, consumerism, spirituality and socio-political realities.

“Our world is suffocated with things. Lagos, the city where I live and work, typifies crowdedness,” says Osahenye, 50. “So I use an assortment of objects to tackle issues of consumerism, spirituality and the environment.

“I embrace the possibilities that ordinary materials could offer, and some of my installations and sculptures favour the engagement of improvisation and a state of temporariness.

“The work is not fixed; it could be dismantled and reassembled in a given space – its malleability being one of its characteristics.”

Mr. Osahenye also presents works from his Isolation series in which he paints human figures curled into themselves, suspended and almost floating across planes of colour – a totally different vibe from his pulsating, multi-layered busy, repetitive collages.

“We see the outer-layer of isolation in some pieces while, when we draw close, a world of eyes comes into view, reflecting a suffocating, over-populated, soul-searching society looking for redemption,” Ms. Mbanefo-Obiago says.

Both artists recently completed their Masters in Fine Arts in the United Kingdom, Mr. Osahenye graduating from Goldsmith’s College while Mr. Isichei graduated from the Chelsea College of Art & Design.

They have been part of group and solo exhibitions in Nigeria as well as in the United Kingdom, Germany, the Netherlands and the United States.

The exhibition runs until end of April and is supported by Temple Muse and Ruinart.

INVESTIGATION: Attorney-General, Adoke, in shady deal that may rob Nigeria of N549billion