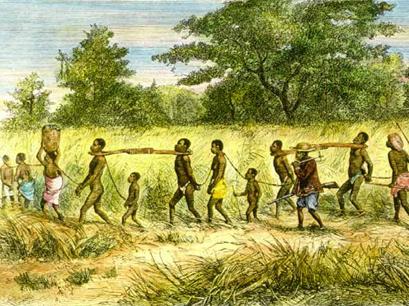 The horrors of the slave trade era were again condemned in Badagry on Thursday.

Hundreds of Badagry indigenes, tourists, artists, scholars and heritage stakeholders turned out en masse on Thursday to mark the International Day for the Remembrance of Slave Trade and its Abolition.

The Fitila (light) Procession which heralded the event took off at about 3 p.m. from the palace of the Akran of Badagry and led by the Akran himself, His Royal Majesty, De Whenu Aholu Menu Toyi 1.

The procession, which had heritage stakeholders like Husitode Moses, the Chairman of Badagry Local Government Area in attendance, marched to the Town Hall, where speeches on slave trade were delivered.

Babatunde Laide-Mesiwaku, the President of African Renaissance Foundation (AREFO), organisers of the event in collaboration with the Badagry Council, said the day was set aside by the UN to recall the evils of slavery.

In his paper entitled: “International Day for The Remembrance of Slave Trade and Its Abolition”, he commended the UN “for making the day a memorable one to review the slavery days through music and art.

“The UN annually invites people all over, especially students, artistes and musicians, to express their resistance against slavery through their art works and plays,” he said.

He said the event was part of activities lined up for the 2012 edition of the Badagry Festival, which would include drama presentations, the Gbonopo Royal Carnival and a fashion parade.

Laide-Mesiwaku said that apart from making the event a reminiscent celebration of the liberation from tragedy in Africa and Badagry in particular for six centuries, it was also meant to promote tourism development.

Senayon Olaluwa, a lecturer from Osun State University, also delivered a lecture entitled: “Beyond The Slave Chain Heritage: Badagry and Developmental Challenges in the 21st Century”.

He said the slave trade was a crime against humanity.

Badagry, a major slave port, showed its relevance with other West African ports like Goree Island, Whedah and Cape Coast.

Meanwhile, there was a drama presentation on how slaves were captured, sold and transported to the new world for plantation work.

The play was taken from a book written by Wanle Akinboboye entitled: “Odigbose” meaning “Goodbye”.