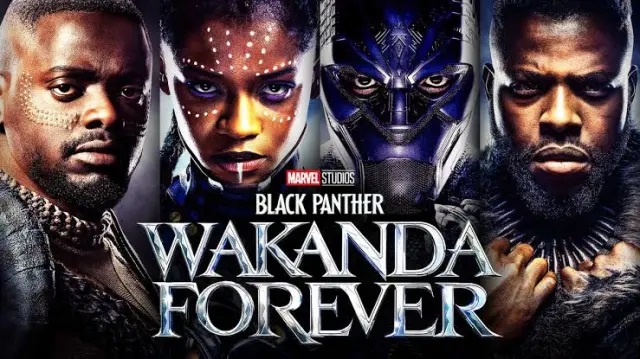 ‘‘The ending is superb. I predict that there will be part 3 of this movie, with the revelation that the late King T'Challa had fathered a child with Nakia before she escaped to Haiti, where the boy, Toussaint, and his mother now live’’.

However, there is a massive hole in the movie without the late Chadwick Boseman, “the Black Panther,” who passed on, sadly, two years ago at the age of 46.

And how I wish Michael B. Jordan were given more than a special appearance! Michael is a heart-grabber any day. I had also expected to see more of Daniel Kaluuya after his unforgettable role in the first Black Panther film.

The costume and the special effects are also superb. The kingdom of Talokan, situated below the Atlantic Ocean, is out of this world.

However, even though some people may think the lip ring on Isaach de Bankolé is a welcome expression of a Masai cultural artefact, I didn’t find it funny or wholesome. It doesn’t even allow him to speak quickly. They should have put that awful thing on the mouth of a Kenyan actor instead of an Ivorian’s! Well, someone said Wakanda is another name for Kenya.

Also, given a chance, I would delete several scenes and shots, including those sleepy market ones. The sound effects are prize-winning; the one that got me hooked was the drumbeat when the spear was beaten into the ground.

Princess Shuri (Letitia Wright) should have simply put that burning spear through his heart as he lies helplessly on the sandy beach. Reason: the cataclysm he caused in our dear Wakanda when he came for revenge over the death of his daughter was way too much to bear.

The alliance he is forced to consummate with Wakanda is fake because he tells his cousin that it is a ploy to buy the time he needs to conquer the land world, our world. That means he is not in it to form an invincible bulwark against the machinations of those supercilious superpowers.

The ending is superb. I predict that there will be part 3 of this movie, with the revelation that the late King T’Challa had fathered a child with Nakia before she escaped to Haiti, where the boy, Toussaint, and his mother now live. Besides, his ancestral name is also T’Challa.

Another basis for expecting part 3 is that the tussle with the Western powers over access to vibranium, Wakanda’s prized possession, has not been resolved, so that it will continue. Viewers would like to see where the deadly competition will go under Queen Shuri, as the fake alliance with the Talokan kingdom is already doomed.

Overall, Wakanda Forever is worth my N6,000 gate fee (I even paid for two other viewers). I am not surprised it attained an impressive approval rating on the most trusted movie scalers – 84% on Rotten Tomatoes and 7.4/10 on IMDb.

As expected, African cinema-goers have proved their love for it. PREMIUM TIMES reported that Black Panther: Wakanda Forever has made history across the continent by shattering previous box office records.

In Nigeria, it became “the biggest industry opening weekend of all time with a box office tally of ₦240 million,” the Abuja-based newspaper said. This figure must have tripled as the theatres continue to fill.

Given Nigeria’s position not only as an African older sister but also as a significant player in the global movie industry, I had expected that Marvel Studios would cast Nigerians in prominent roles in this second serving, especially following complaints that our actors were not seen in the first movie in 2018 even though there was a Chibok girls episode in it. (Someone told me there are Nigerians in the current film. Who are they? Kamaru Usman, you mean? I asked. No!).

Director Ryan Coogler should have been asked that question when he, together with some of the crew and cast, including Wright, Nyong’o, Gurira, Mejía and Winston Duke, came to Lagos on November 6 for the “black carpet” premiere of the movie – the first official African Marvel Studios premiere in Nigeria.

Nevertheless, I doff my hat to the director and his team. With my clenched fists across my chest, I say, “Wakanda forever!”

* Ibrahim Sheme is the Director, Media and Publicity at NOUN