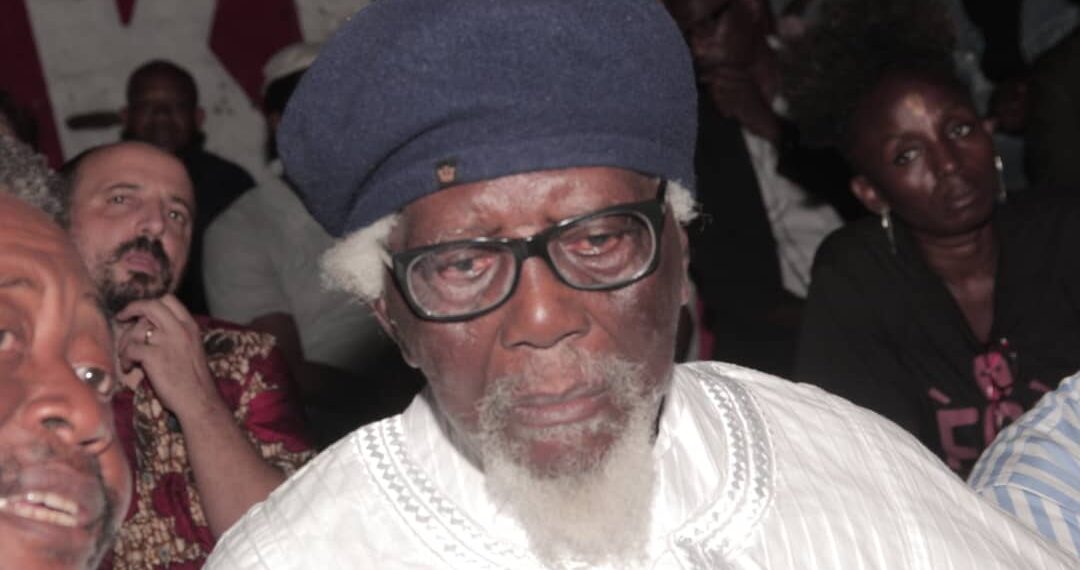 The 87-year-old architect said since Lagos was a yardstick for creating modern structures, the state needed to be on the frontline for solving inadequate and insufficient housing problems.

A pre-eminent Nigerian artist and veteran architect, Demas Nwoko, at Freedom park, referred to Lagos as an environmental disaster.

The veteran architect said this at the public presentation of his new books, a collection of essays on arts, culture, design and aesthetics, ‘Concrete Thinking’ and ‘The Happy Little African Prince’ at the 24th Lagos books and art Festival.

During a question and answer session with the audience, he was asked how his past ideology of building cheaper houses with local materials would solve housing problems in Nigeria.

He said, “The problem is Nigeria is being swept along by the world’s marketplace; we just buy and buy and buy.”

The 87-year-old architect explained that since Lagos was a yardstick for creating modern structures, the state needed to be on the frontline for solving inadequate and insufficient housing problems.

He said, “When Lagos changes, the village will copy and change”.

The protean designer, however, pointed out that Lagos is not looking at solving its problems yet.

“Look at Lagos; Lagos is an environmental disaster; why are you not changing it? We are not approaching our basic problems. Rather, we seek refuge outside and import solutions that are not lasting.” He said.

At the event, his grandson Uno Nwachukwu presented a play at the freedom park amphitheatre with his troupe titled ‘The Big Tree’ written by Ese Oghene Brume.

The play focused on passing the Wisdom of Pa Demas Nwoko on the need to focus on culture.

Pa Demas, fondly called, is a man of many creative talents. A sculptor, painter, designer, architect and builder.

The former Lecturer of arts at the university of Ibadan presented his two books to the audience who were in attendance.

He said the first book he titled, ‘Concrete Thinking’ is a collection of essays he wrote throughout his creative career spanning all fields from sculpting, architecture, theatrics and more.

At a press conference before the book launch, he spoke briefly about the book, ‘Concrete Thinking’.

He said, “I started writing the book in 1968, and since then, I have been writing papers all over the world, which have been harvested on our culture.”

His second book was an autobiography titled ‘The happy little African Prince’, which he believes tells his story of growing up and pursuing his various fields.

At the event, Pa Demas was honoured by the presence of Lagos socialites and veteran creatives, including the Erelu of Lagos, Abiola Dosunmu, Kayode Aderinoku, Tunde Kelani and Professor Bruce Onobrakpeya.

The dignitaries took turns launching the books; Erelu Dosunmu and Mr Aderinoku took ten copies of both books at a total of N150,000 each.

The 90-year-old professor Onobrakpeya, congratulating Mr Nwoko, said, “They used to think that the artist has failed in everything and just sticks unto drawing and sketching.”

“But it has turned out that the artist is a philosopher, he is a writer, he is a historian, he is everything, and for me, I congratulate Demas for producing these two books that are being launched now.”

He also said that he has not read the second book but knows that the autobiography would share stories from their young lives, and he advised people to read it.

Demas Nwoko is an 87-year-old Nigerian creative who spent most of his career trying to incorporate modern techniques in architecture and stage design to portray African subject matter in most of his works.

From 1957 to 1961, he studied Fine Arts at the former College of Arts, Science and Technology, Zaria, now Ahmadu Bello University.

In the 1960s, he was a member of the Mbari club of Ibadan, a committee of Nigerian and foreign artists and also a lecturer at the University of Ibadan.

In the 1970s, he was the publisher of the New Culture magazine.

As a foremost renowned architect, he is responsible for creating notable structures, including the Dominican Institute chapel and the Oba Akenzua Theater in Benin City, Nigeria.

A book written by John John Godwin and Gillian Hopwood, ‘The Architecture of Demas Nwoko’, is recommended for all architecture and African Studies collections across the world.

As a sculptor, his most notable work, ‘the philosopher,’ is a guided study on sculpture.