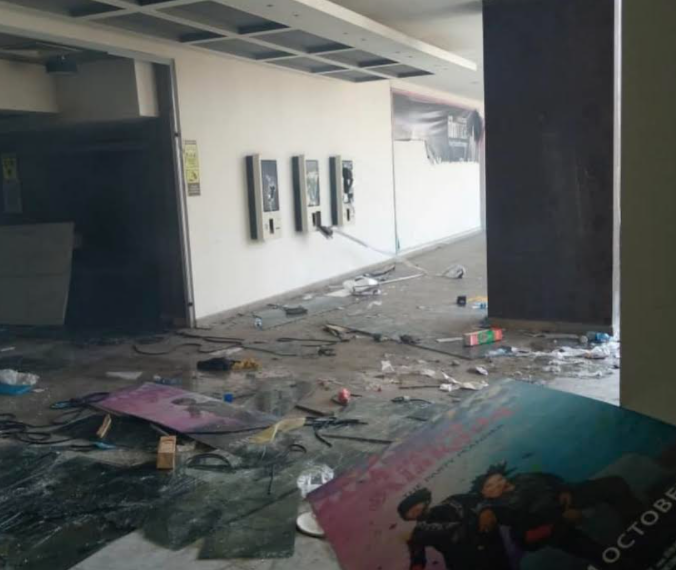 Wreckage from the vandalised and looted Filmhouse Circle Mall

Popular chains of supermarket and department store, SPAR and Just Rite, were also looted and vandalised.

Hoodlums have vandalised and looted Filmhouse’s Circle Mall and Surulere cinemas as a fallout of the #EndSARS protests.

Both cinemas are situated in popular malls on Lagos mainland and island respectively.

The film exhibition company released a statement on its social media handles showing the extent of destruction of its facilities.

Their signages, ticketing machines, computers and other facilities were not spared as they were completely damaged and carted away by the
looters.

“These past few days have been tough, more for some than others. Our circle mall and Surulere cinemas have been vandalised but Nigerians have lost more than we can imagine,” the statement read.

They have however reassured their patrons that they will rebuild the destroyed cinemas soon.

Filmhouse, Silverbird and Genesis are the top three cinema exhibitors in Nigeria. All three cinema houses recently reopened for business
after being shut down for more than six months following the Coronavirus outbreak in the country.

Since Wednesday, hoodlums have vandalised and burnt several businesses and properties in different parts of Lagos.

Some of the affected buildings include the Lekki Toll Plaza, Lekki Concession Company (LCC); GTBank, Zenith, and Polaris banks branches on Admiralty Way; BRT bus terminal with several BRT busses in Oyingbo; Television Continental (TVC); Nigerian ports Authority building in Marina; and The Nation newspaper headquarters in Lagos, among others.

Popular chains of supermarket and department store, SPAR and Just Rite, were also looted and vandalised.