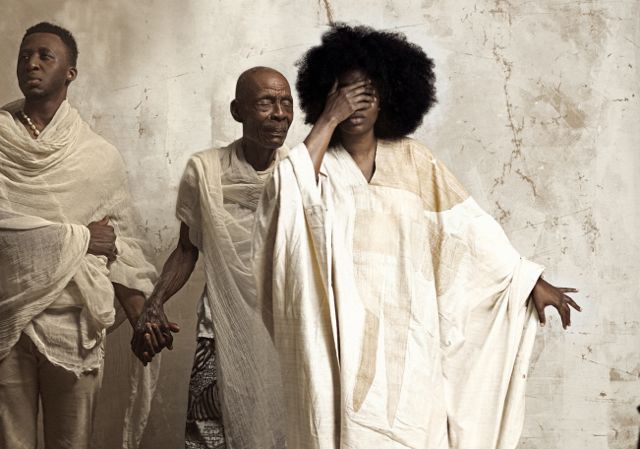 “Standing Out”, an exhibition showcasing diverse works of‎ 11 leading and emerging artists, opens at Temple Muse, Lagos, on May 16.

The exhibition is a reflection of a multitude of issues surrounding feminism and equality, through a variety of media including painting, photography‎, print, sculpture, clay, glass, weaving, mixed media, and performance, according to the organizers.

“What echoes through all their works is energy‎, resilience, interconnections and overlapping memories and identities, with visual metaphors of breaking boundaries across psychological, physical, and emotional landscapes,” said Sandra Mbanefo-Obiago, the exhibition’s curator.

Davies-Okundaye’s works are covered in traditional adire symbols which look like mere patterns to the uninitiated, but which clearly communicate universal values such as work, community, strength, love, birth, and children through a secret Yoruba female vocabulary.

Some of these traditional patterns and expressions are echoed in the formidable drawings and mixed media sculptures created by Okore, whose drawings “cosmic dance” and “ old birth” literally depict a primordial energy which “turns dust to mountains, and rivers to skies”. Her drawings on hand made paper and her hanging burlap and clay sculptures touch on “both the transience of human labour and its inevitable mark on the material world.”

The relationship between labour and leisure is explored in the subtle works of visual and performance artist Ogunji, in which she analyzes how women occupy space and how their bodies, social power, and presence is strengthened through “epic and ordinary actions.”

Ogunji’s intricate drawings and embroidery on architectural drafting paper brings alive a world of iconic female characters featured in classic African films by Ousmane Sembene (Black Girl) and Djibril Diop Mambety (Touki Bouki) in which she explores the inner conflict between aspiration, nostalgia and house work and the strength to overcome physical and mental inhibitions and swim into a sea of life and adventure.

Ancient traditions of weaving are reflected in the intricate works of interior designer Godwin, whose diverse artistic narrative is woven across colorful glass, wool, yarn, ribbon, and delicately embossed montage and ink prints which use nets as a powerful symbol of boundaries as well as power interconnections.

Okigbo’s powerful “female heroes” portraits are intended as “recognition, tribute and salute to the prominence, grandeur and majesty of women of African descent” including historic figures like Tiye, the great royal wife and matriarch of the Egyptian Amara Dynasty, Sarraounia, the warrior queen of Azna, and Amina Mohamud, the Hausa warrior queen of Zaria, to contemporary figures like the Kenyan Nobel Laureate Wangari Maathai, South African singer and activist Miriam Makeba and Rosa Parks, the “First Lady of the Civil Rights Movement”.

The intersection of present and past comes to light in the multi-layered photographs by musician/photographer, TY Bello, whose transcendent self-portraits are points of transition with images she took of celebrity musicians Asa and Bez, creating new narratives through a mystical cross fertilization of ideas and the spiritual connection across age, gender and identity.

The use of hair as a visual metaphor can be seen in Taiye Idahor’s Imadode works, meaning literally, “I did not miss my way”. Her delicate paper collage works are her visual language of identity and the cyclical nature of life, as she explores public versus private image, reality versus virtual images of self, and “the boundaries between them in relation to culture, faith and tradition.”

Okediji’s mesmerizing underwater photographs expands our understanding of what it means to be a woman through dreamy imagery representing opportunities and barriers within natural and imagined intellectual landscapes.

Her multi-layered images of women existing in fluid underwater blue and green hues and eventually breaking out of this slow, silent aquatic landscape explores “one’s ability to find functional balance and thereby project prominence” by overcoming “boundaries that only exist in our minds”.

Okediji said her works were inspired by humanity and emotion.

“My works are very personal. As an artist, if a part of you is not in there, then you may just be – to use one of the words I’ve heard today – a designer, someone who’s creating stuff to a very specific end,” she said.

The idea of “I am limitless” is echoed in the wearable art works by Troy, whose intricately hammered and formed re-purposed brass and silver jewelry draws inspiration from her years of working with grassroots communities in West Africa. Her works, such as “Onitsha bride”, touch on how society values its women and how women in turn value themselves.

Bamgbala’s iconic enshrouded ceramic artworks are a contemporary interpretation of women’s traditional pottery, which she has echoed by layering raw, organic materials around a thrown base. Her artistic methods of manipulation push beyond the limits of clay and explore concepts of light and play through strength, balance, color, and tactile materiality.

Adebowale’s powerful monochromatic female forms with dashes of red highlights across tattooed faces and bodies express the artists’ clarion call to fight discrimination and break down gender discrimination and stereotypes by disregarding “the pressure to be thin, fat, short, tall, dark and light.”

In Beauty, a performance by Ogunji, hair is used as a physical reference point and symbol of women’s outward looks and explores the interconnectedness of women and the relationship that they have to each other and to their hair.

“Standing Out is an important testament to the strength, spiritual depth, wisdom courage, and also humour, of women artists whose independence and creativity is deeply influenced by Africa,” said Mbanefo-Obiago.

“The way these diverse artworks cut across generations, geography, and experience provides an important contemporary perspective on traditional feminist thought, at a time that the global fight for equality and an end to gender based discrimination and violence is still critical.”

Ebun Clark‎, a former Director of the Centre for Cultural Studies at University of Lagos, said the art world is a male dominated space populated with misogynists.

“I went to the Fourth World Conference on Women in Beijing in 1995. Alas, not much has changed for women since then,” Ms. Clark, a retired Professor of English.

“That is why this exhibition showcasing eleven female artist of diverse specialization is so hugely important for the art world.

Avi Wadhwani, the CEO of Temple Muse, described female artists in Africa as “an incredible creative force to be reckoned with.”

“We are proud to showcase these amazing artworks for the next three months and trust that the strong messages presented in Standing Out will resonate widely.”

Standing Out is sponsored by UBS, the Swiss international bank, and luxury house Moet Hennessey.