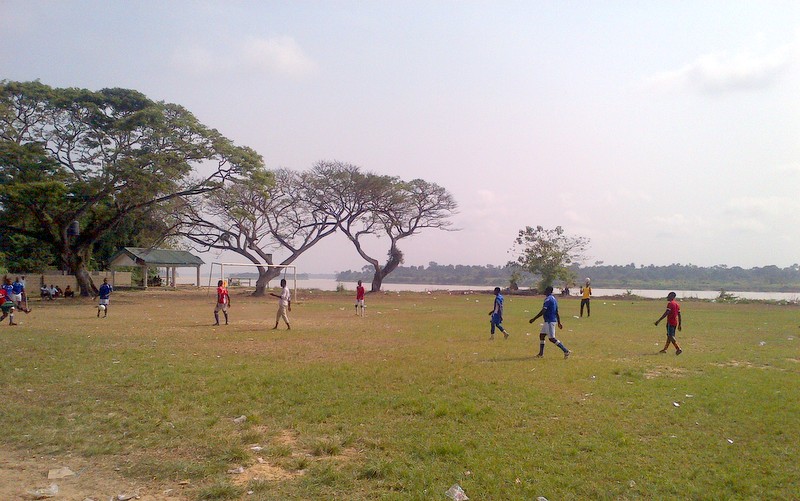 I’m in Odi, a densely populated, averagely sized town lying at the foot of the River Nun, the second stop in Bayelsa state coming from the Delta route of the East-West road.

My mission here is to assist a friend, Preye Aganaba, in his senatorial campaign but I have spent every spare moment basking in the glorious optimism of this town, and also concretizing nostalgia for in 2001 I had lived in the town with my mother who was a nurse at the General Hospital.

What has made this town special to me isn’t just its scarred history, or the grandeur of one of its sons gunning for the Nigerian Senate, or its breathtaking scenery. It is its response to a mammoth disaster, over the years, that has fascinated me endlessly. Odi has become so popular that its story is just a google click away. In 1999, eleven policemen were killed by irate youths of the community. A platoon of soldiers were subsequently dispatched to ‘take’ the town but a makeshift militia of the town youths, armed with second-rate firearms, somehow managed to repel the soldiers.

After insufficient dialogue, the government of Obasanjo mobilised the Nigerian Military in a way that hadn’t been done since the civil war and in a way that was fit only for external aggression, and the order was given by the president for a ‘total offensive’ on the town. On the morning of November 20, 1999 the assault took place. Rounds of shells were thrown into the town, fighter jets bombed houses and yam barns.

The infantry moved in, killing all in their path. When the assault was over Odi was completely destroyed. Houses tumbled in flames, bodies decomposing on empty streets. The survivors had fled. Human right groups put the death toll at 600, but the government insisted it was much more lower. Just a year later, when I visited the town, I thought I had heard the last from Odi. Although life was returning shyly, commerce and infrastructure seemed permanently damaged.

In a 2013 Travelogue for PREMIUM TIMES, I highlighted how amazed I was at the rapid development ongoing in the town. By December 1999, the town was like Germany after World War 2 or like Hiroshima after that first atomic bomb. A protracted lawsuit with the federal government ended in a fair enough deal: The federal government paid damages of 15 billion naira to the town. A suspiciously large sum of the money, about 38 percent, went to the lawyers. A fraction of the money was fixed-deposited while the bulk of it was shared to all native of Odi above the age of 9.

It was not possible for the initial glitz of the town to hide these new monies. Of course buildings are sprouting everywhere, old ones are getting completed, empty provision stores are restocked, more Okada’s are on the streets and people prefer to quarrel for hours than to fight even for seconds.

For someone who have been following Odi closely, especially after the massacre the question of if Odi has finally moved on is one that should be revisited. For many natives they have felt victimized by the country and the new billions were a way of saying ‘we are sorry’ by a nation embarrassed by its past. There are those who have, at last, found closure. But for the most ardent pursuers of justice, closure should be Obasanjo found guilty of genocide in a Criminal Court. A people cannot hide grievances in progress and with the way Odi is edging rapidly towards her ‘small London’ status, I prefer to believe that the town has found closure at last and is moving on.

Julius Bokoru is an award winning essayist and prose writer. His works have been published on local and international magazine. He is the author of the memoir ‘The Angel That Was Always There’.