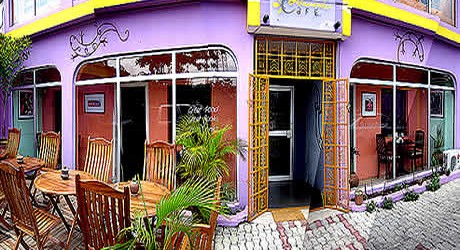 Friday. I had decided early on in the day that the night was going to be for clubbing. At work I resolutely turned the TV to a music channel and in between editing stories I practiced my moves for the night.

I called the boo. No show.

I called my “party friend.” No show.

I was not to be deterred. Last, I called my Uncle – I swear, we are actually related. Uncle became a hero.

We agreed to meet at Salamander Cafe, off Aminu Kano Crescent at Wuse 2. I was going there for the monthly book club of the Abuja Literary Society. The event started by 7 p.m. but I sashayed in like a rock star at 7:44 p.m. All heads turned and the spotlight grew hotter when I couldn’t find a seat. Luckily, some gallant lad offered me his.

The club was discussing Chimamanda Adichie’s The Thing Around Your Neck – a title I have long suspected was inspired by Sam Gamgee’s (or was it Gollum’s) words to Frodo in The Lord of the Rings: The Return of The King.

It was interesting to watch people speculate on an author’s inspiration for a particular piece of writing; giving words, which may as well have been inspired by something as mundane as a baby’s poop in a diaper, much deeper meaning and significance.

Just a few minutes past eight, I got the call from my Uncle who I still swear I’m related to. The spotlight came back on me as I grabbed my bag and rushed out of the too small room.

My Uncle asked me what I would like to do that night. I considered the whole embarrassment of going to a club with him and having so many potential suitors avoid me like a plague, thinking I was taken and with my aristo, and opted for a pepper soup joint.

We headed to Park 24 at Gwarimpa, off 2nd avenue. It is really a park, a mini one with fine lawns, gazebos, a drinking bar and actual playground equipments for children.

I imagined one hanging out there on a Saturday, drinking wine or beer and sipping pepper soup with friends while the children made loud noise on the swing and slides. Personally, no thanks. If I go there, I’m going for fun, preferably at night and with no kids.

Immediately, we entered the gates of Park 24, about four hostesses were on us, asking us what we wanted, where we would like our tables set, what we would like to drink. Big man service, I like.

We sat in the open air rather than under one of the gazebos and ordered for pepper soup and a bottle of wine. The owner himself came to our table and suggested a bottle of Don Ronsfeldt.

I’m not much of a wine person; I hate “mineral” too. I would have preferred a bottle of malt but you are not supposed to be on your best behaviour when hanging out with my good time Uncle, so wine was it. While waiting for the pepper soup, this lady approached our table, insisting that we buy her pepper gizzard. I love cat fish pepper soup as much as I love my mother and I was as hungry as a dog. The plan was to do justice to catfish pepper soup and show it who the master was. But madam was so persistent that Uncle who was not a fan of catfish eventually copped to her overtures and bought the gizzards- two plates.

A World Cup game was on – sorry, I had no idea which teams were playing and when we sent a girl to find out, she told us France and “Swizard” and then spelt Swizard – Sui. No idea.

The music was great though. It wasn’t so loud that we could not hear ourselves talk yet it was loud enough that one could rock to it. I was impressed by how the speakers had been strategically placed behind a backdrop to create this effect. Though I still had the dance fever in my bones, I never once got up to dance despite several urgings from my uncle. I had had enough of being in the spotlight for one night.

My pepper soup finally came and it was gloriously huge; large enough to feed a hungry family of five. It had the right amount of pepper and was delicious. Alas, the gizzard in my belly killed whatever beautiful relationship I and the pepper soup could have had. I still managed to demolish two huge pieces then asked for a takeaway pack. My uncle was surprised at how huge the helping was – filled two take away pack, the leftovers did.

But the night was still young so we headed to Capitol Bar at Transcorp Hilton.

The bar is just off the reception on the right of the main entrance doors.

The first sight that greeted me filled my heart with such delight: a dark sinned, bald woman in glittering white iro and buba singing a Bob Marley song. You would have expected one dressed like that to be rocking some fuji or juju music. But I so loved the contrast which increased my enjoyment of the performance.

By the way, the dudes at the door demanded a gate fee of N3, 000 but my Uncle Good Time, aka familiar face and life patron, big-manned his way in.

We sat at the bar. The scene was so formal, I felt like pulling my teeth. Everyone sat calmly either at the bar or at mini lounge tables.

There was a live band accompanying our reggae-singing madam who soon moved to actually singing juju- Sir Shina Peters. We all sat quietly and listened and for a time, I was the odd one swaying to her music and singing along. Wine can do these things to you.
My Uncle ordered another bottle which I had the honour of drinking most of since I wasn’t the one driving.

After madam’s performance, the audience clapped politely. Formal, I say.

Then a sweet young thing, all dressed in brown leather – leather skirt, leather tights, came up and sang some ragga. Everyone was still calm and polite like at a piano bar. Jeez.

Meanwhile, bar man, thinking that Uncle was my aristo, was giving me attitude; as if his dream was not to be an aristo.
The final performance of the night came from this dude singing Igbo highlife. Now the club started jumping as the guy did the whole talk-singing thing and telling a few home truths in song.

Some ladies on the left side of the room from the bar whooped and giggled self-consciously when the singer sang lines about the triangle between a man, his wife and his mistress. They looked to be more in the mistress category, if you ask me.

This singer was actually the only one of the three who got sprayed like a lot of money. You know how big men like all this “local,” reminds-me-of-my-village things but in their I-shit-only money surroundings.

Two bottles of Chardonnay later – at N7,300 each – it was time to go home.
It was a few minutes after 12, still a young night for some folks, but I had had a little more fun than I had anticipated and the eyes were beginning to swim in their sockets.

The following morning, my head sang out the memories of my fun night as a dirge of pain. But who cared? It was worth it. I look forward to more.

INTERVIEW: HKN is not all about Davido, B-Red says