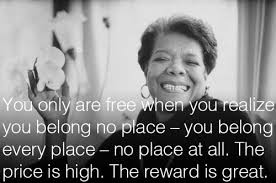 Nobel laureate, Professor Wole Soyinka, Sunday, paid tribute to the departed African American poet, Maya Angelou, describing her as a “philosopher queen” and showering praises on her life of commitment, community, and solidarity.

“Maya was the down-to-earth kind who felt her subjects keenly, a philosopher queen without the aloofness,” Mr Soyinka wrote, warmly situating her passion and compassion for Africa in the realms of authenticity and sincerity. “To obtain a glimmering of what the continent meant to her, one would have to think in terms of a mystic nostalgia” he said,

At a time when the powerful oil lobby in Washington made it impossible for the then Clinton administration stay committed to the challenge of democracy in Nigeria, during the brutal dictatorship of Sani Abacha, the late Ms Angelou helped the Nigerian opposition in exile access the administration, and also helped build the pressure that ultimately tore Washington away from the grips of the oil lobbyists.

Soyinka paid tribute to those exertions in his Sunday statement, saying: “Queen Angelou tightened her sash like a market mamma, mobilized emergency forces, and personally led the charge to beat down the doors of a lethargic – and/or ambiguous – US administration during the Sani Abacha murderous dictatorship” adding that “She kept her finger on the nation’s pulse throughout a people’s travails.”

Mr. Soyinka also spoke in personal terms of the passage of Ms. Angelou, recalling how in 1985 she had wept openly when a literary prize she had nominated Soyinka for finally went to the German modernistic writer, Gunter Grass. Ms Angelou famously predicted when she was being consoled that “No, it’s all right, I know he’ll win a bigger one.”

A year later Mr. Soyinka became the first African and black person to win the Nobel Prize for literature. Ms. Angelou was US national poet laureate and read a poem at the inauguration of President Bill Clinton. Although her oeuvres were broad and extensive, the poem “Phenomenal Woman” was perhaps her signature work of all times. She died at 86.

Chibok Girls and the Reluctant President, By Jibrin Ibrahim