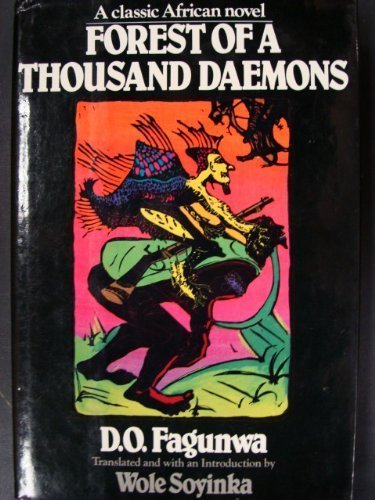 I was greatly thrilled by the recent 3-Day International Conference in Akure, capital of Ondo State, in memory of a distinguished pioneer of African literature in indigenous languages, the inimitable Chief Daniel Olorunfemi Fagunwa. What was not particularly thrilling to me was that there was hardly any mention of the past theatrical performances sponsored by CHAMS plc of Fagunwa’s classic novels Ogboju Ode Ninu Igbo Irunmole and Ireke Onibudo in the original Yoruba and in English translations.

These plays were staged rapturously in Ibadan, Lagos, Abuja, Akure and Ile-Ife. It is akin to a sin to forget so soon that these events took place. Scholars, journalists and sundry cultural enthusiasts must always make the connections such as the CHAMS-sponsored plays and the Akure conference to lend some measure of linearity to the reinvention of Fagunwa. We cry that corporate sponsorships of the arts are few and far between, yet corporate bodies such as CHAMS that initiated the landmark Fagunwa theatrical performances are somehow left in the lurch.

Remarkably, the Akure conference had the theme: “D.O Fagunwa: 50 Years On”. Organized by Ondo State Government in partnership with the Centre for Black and African Arts and Civilization (CBAAC), Lagos, the D.O Fagunwa Foundation, and the Fagunwa Study Group, the opening ceremony was chaired by the Orangun of Oke-Ila, Oba Adedokun Abolarin, and attracted the high and mighty from within and outside Nigeria, notably the late Fagunwa’s family, scholars, politicians, literary icons and top government officials. The keynote speaker, Nobel Laureate, Prof. Wole Soyinka spoke on “Fagunwa’s Forest Tapestry: Heroes, Heroics, Morals and Moralists”, eloquently linking Fagunwa’s genius and morality to the ills of society.

The host, Ondo State Governor, Dr. Olusegun Mimiko celebrated Fagunwa as the home hero who made good. His Ekiti State counterpart, Dr. Kayode Fayemi lionized Fagunwa as the pioneer who chartered a path of glory for indigenous Yoruba fiction.

Born in 1903 in Oke-Igbo, Ondo State, Fagunwa wrote his first novel, Ogboju Ode Ninu Igbo Irunmole in 1938. He then wrote four other magical novels in Yoruba including Ireke Onibudo before dying mysteriously in 1963, aged 60. Wole Soyinka famously translated Fagunwa’s first novel into English as The Forest of a Thousand Daemons.

My knowing of CHAMS sponsorship of Fagunwa’s plays came at the instance of my astonishingly enlightened sister Temitope Lakisokun, the CEO of Insider Concepts Ltd, Lagos. She apprised me of the fact that CHAMS Nigeria plc was sponsoring the theatrical adaptation of D.O. Fagunwa’s classic novel, Ogboju Ode Ninu Igbo Irunmole, in the first instance. The company then followed up the next year with the Yoruba and English productions of Ireke Onibudo.

The English version of the first play was translated and adapted by Prof Femi Osofisan as Adventures in the Forest of a Thousand Demons. The Yoruba version was done by Professor Akinwunmi Ishola, and he was quartered with his actors at Ife. I informed Prof Ishola that I acted in his play Madam Tinubu as a first year student of the then University of Ife.

CHAMS’ CEO, the personable Demola Aladekomo praised the work done and, in a post-mortem at a Chinese Restaurant, urged the playwrights and directors to up the ante in reaching the epic promise of the works, promising that he would go back to his directors to provide more resources towards the greatest promise of the performances. Displaying a rare mastery of Fagunwa’s work, Aladekomo made a case for the inclusion of the author’s opening rendition in Osofisan’s Adventures in the Forest of a Thousand Demons.

As the major consultant to the project, Osofisan informed us that he and Akinwunmi Ishola undertook to do two completely different adaptations. The two authors decided they would not talk to one another until their work was done. The result could therefore be likened to a matrix, doing two plays or two productions, as it were. The Yoruba cast was holed up in Ife with Dr Kola Oyewo as director while the English group stayed in Ibadan with Dr Tunde Awosanmi as director. They worked together for one month but, as Osofisan quipped, “Man proposes, NEPA disposes!”

The performances were rousing advertisements of total theatre. Music and dance and well-spiced proverbs held up the eagle feather of the grand performances.  The late Ify Agwu as Iranlowo played the part with requisite aplomb while Tunde Adeyemo, Toyin Oshinake, Steve James held their forte with needed mastery. The lines were delivered with considerable mastery. The plays in Yoruba and English graced sundry stages at Ibadan, Ife, Akure, Abuja and Lagos.

It is against the background of the recent CBAAC conference on Fagunwa in Akure that I think it fitting that the CHAMS-sponsored performances of Fagunwa’s novels as plays at Ibadan, Ife, Akure, Abuja and Lagos should be given a pride of place in the scheme of things.