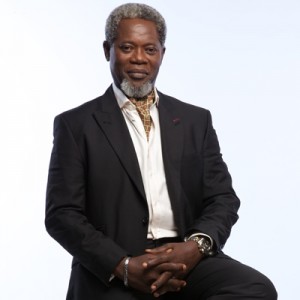 The actor said he had to leave the U.S. for tax reasons.

The event, which started with a red carpet by 10 p.m., was a fun-filled atmosphere as guests and fans alike, trooped in to have a wonderful time with the respected Nollywood star. It was a night of excitement and merrymaking.

Victor Olaotan who is also known as Fred Ade-Williams, the patriarch on the popular TV series, Tinsel, relieved his youthful days as he danced to his favourite oldies with astonishing dance moves, much to the surprise and excitement of all in attendance. He rounded the dancing session by ‘digging’ to the latest single from Davido, Gobe.

During the “hot seat” session which was a question and answer segment, Olaotan, a former staunch member of the Catholic Church, revealed he left the church because the problems in Africa require more spiritual fervency and handling.

“I grew up in a Catholic setting and was a committed member till I left for Pentecostal church. The problems in Africa require more spiritual fervency than what the Catholism was giving me; so I had to leave”.

Victor also spoke about his family abroad and leaving America because of tax miscalculation.

“I was running a business and paying personal tax only for the authorities to come and said I ought to have been paying company tax as well. By the time they were done with calculation I had $4 Million dollars to pay. I had to leave because I couldn’t afford that amount,” he said.

There were also various music performances, comedy acts and dance routines, to thrill the crowd.

My marriage will not stop me from acting, Kannywood star, Sadiq Sani, says