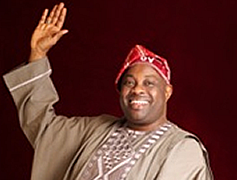 Without Abacha, There Would Have Been No Ovation Magazine — Dele Momodu

However, one major thing has largely defined every stage of his life and career trajectory – his penchant for thinking outside the box. In 1982, against the tide and despite his wide exposure to English literature and scholars like Wole Soyinka and Kole Omotosho, he chose to study Yoruba for a first degree at the University of Ife (now Obafemi Awolowo University, Ife). “Do you want to become an herbalist?” Momodu recalled his mum asking him then. “The other thing was that I wanted something very spectacular. I wanted people to underrate me and say because I studied Yoruba, I was not brilliant,” he recalled. He fuelled his rising profile for undertaking the unbelievable when he proceeded to bag a Master’s degree in Literature in English in 1988.

Since then, Bob Dee, as he is fondly called, has not looked back in his adventures into uncharted terrains. Forced into exile in London by the late General Sani Abacha for championing the June 12, 1993 election cause, which his mentor, MKO Abiola reportedly won, but was annulled by General Ibrahim Babangida – who was then military head of state – Momodu, with the support of friends, started Ovation in 1996. Although there were many others before him, Momodu’s Ovation has since gone on to redefine the landscape of celebrity journalism/reporting in Nigeria and Africa. “It was turbulent when we started. They said it won’t last six months… But we have been able to do what people thought was impossible and we are still managing ourselves to carry on. Ovation would be 17 years old this month (April). Africans must believe in themselves,” said the successful journalist and publisher, entrepreneur, and one time presidential candidate.

In this exclusive interview in London, Momodu pulls no punches about his days in exile after the June 12 struggle, Abiola, his journalism passion, Ovation, criticisms of President Goodluck Jonathan’s administration, and in his words, why he doesn’t make a fetish of his humble beginnings, like having no shoes while growing up.

SU: You must have had some very nasty experiences over the course of interviewing influential or controversial figures?

DELE MOMODU: In reality, the funny thing is that we have never interviewed controversial people. We cover events like every other newspaper or magazine. But because of the quality of Ovation and success of the publication, all the attention was always on us. Please tell me what Ovation is doing that Genevieve, ThisDay Style, Allure in Vanguard or Life in The Guardian is not doing? They go to weddings, we go to weddings. If the Abachas or Babangidas are getting married, we would go there. That’s our job. The job of CNN is to cover everybody; the same way they would speak to President Obama is the same way they would speak to Osama bin Laden or Gaddafi if they were available. Was it not on CNN, Sky News and the newspapers that we saw the house where Gaddafi lived? But in Nigeria, we tend to adulterate and bastardise everything. So if Ovation shows you the house of Abacha, it means that Ovation is corrupt; whereas if Hello shows you Saddam Hussein’s palace, nobody in Britain is going to accuse them. One of my favourite analogy is this; you say a man stole your money and I show you how he is spending it, then you hold me responsible. It’s crazy. If someone steals your money and a publication comes to show you how this man lives, and you leave the person who stole your money to grab the other’s neck to say he is promoting corruption, how come? So, how would you have seen the houses where these people lived if a journalist did not show it? How would we have known about terrorism and Osama bin Laden? They even showed us their terror training camps. So would you say they were trying to encourage people to become terrorists? They are just doing their job.

SU: Against the odds, you ran for the presidency in 2011. Did you really believe that you would become president or was it just a far flung expectation, especially as very many felt you stood no chance at all?

DELE MOMODU: You see, you must never allow difficulties discourage you in life. I knew it was going to be very difficult to win that election. But trust me; I believed that if Nigerians were serious about change, then, there was no reason why I couldn’t win it. Firstly, I had expected that the media would educate the people about the quality of candidates. But I was very disappointed. It was even the media that told me from day one that I had no chance. The media rated Nuhu Ribadu, a police officer; Atiku Abubakar, a former (Nigerian) customs officer; Goodluck Jonathan, a former teacher; and underrated a publisher of international repute. Some people said, oh, I won’t waste my vote by voting for Dele Momodu because I know he can’t make it. But it’s a game of numbers. If all those who believed in change voted for me, then Jonathan would not be president. Then I would be president. But, not in a country where we live in self-defeatism. Before an average Nigerian starts anything, he is already looking at one thousand obstacles. It was only one pastor who called me and gave me hope. I don’t go to his church. He said, Dele, I’m following what you’re doing, please don’t give up, people cannot see where you are going, but don’t let anybody discourage you.

There was nobody that (President) Jonathan knows today that I did not know ten years before him. Is it Aliko (Dangote), Femi Otedola, Mike Adenuga, Jimoh Ibrahim? But, everybody was afraid. That is the problem in Nigeria. Once a man is in power, then everybody moves towards him. Yet, there were a few people who believed in my dreams and knew that I was trying to make a statement; that when you have alternatives, consider them. They said, ah, our votes won’t count. If it was so overwhelmingly obvious, nobody could have stopped it. But I also knew from experience that John Kuffour in Ghana contested three times before he became president. Professor Atta Mills also contested thrice before he became president. I knew that Abraham Lincoln tried so many times before he made it. So, as they say, the journey of a lifetime begins with the first step. I’ve made that first step. I’ve shown clearly that I am not going to sit down at home and complain that Miss Nigeria is ugly when I won’t allow my own daughter to contest. That is the situation of Nigeria, people sit down at home, complain and lament, like Jeremiah, that; oh, Miss Nigeria is very ugly, how can this one represent us? Meanwhile, you have beautiful daughters at home and won’t allow them go for a beauty contest. That is how politics is.

This interview was first published on the website Sam Umukoro Interview. The author gave us permission to republish

Article of Faith: I Am Greater Than Isaiah, By Femi Aribisala