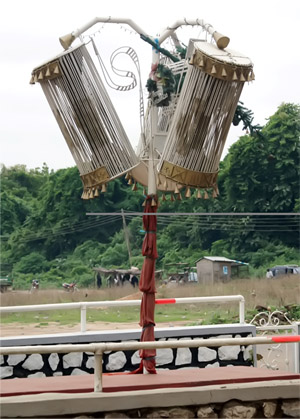 The relics are scattered across the state particularly in Ogunmola Alakia, Ibadan, Oke-Ogun and Ogbomoso.

The National Museum of Unity, Ibadan, said on Friday that the rich relics in Oyo State would be listed as national monuments as part of measures to enhance tourism development in the country.

Bode Adesina, the Curator of the Museum, said this in an interview with in Ibadan. He said that the state was endowed with unexplored relics.

“Oyo State is unique and is endowed with a of lot monuments which are in different locations in the state. Unfortunately, most of these relics have not been brought to the limelight,” he said.

He said the relics were scattered across the state particularly in Ogunmola Alakia, Ibadan, Oke-Ogun and Ogbomoso.

“The relics are in Ogunmola’s palace, Soun of Ogbomoso’s palace. There is also David Hinderer’s Colonial House in Ibadan, which is one of the monuments to be enlisted. We are working in collaboration with the Oyo State Government to draw up a management plan for some of these monuments. At the end of this exercise, we hope we would take those monuments to our headquarters in Abuja to propose them for enlistment as national relics or national monuments.”

Mr. Adesina said since the state had yet to have an enlisted monument, the effort at creating one was going to be tasking as there was need to prepare the dossiers for consideration in Abuja. He added that the proposal would be prepared by the museum for the Federal Government’s consideration.

“But we have to involve the state government, local governments and stakeholders in the process of doing this,” he said.

He also said there were others monuments that the museum was exploring, adding, “By the time we do this with the state’s Tourism Board, we would know that we have started something in Oyo State.”

On the economic benefits of developing the monuments, Mr. Adesina said the gains would be realised once tourists from different walks of lives visit the centre.

“If a tourist visits Oyo for instance, he may decide to spend a night in the town where the hotel operators will make money. Also, vendors who sell food will be able to make brisk business. ”

The curator said that the development of such monuments would create employment opportunities in the state, adding that the experience would be like that of the Zimbabwe monuments and the Pyramids of Egypt, which have become global tourist destinations.