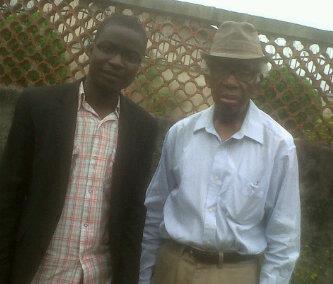 Born in 1921 in Boumandi, present day Bayelsa state of Nigeria  Gabriel Okara was part of that golden set of pioneer African writers. He is the first renowned  English language black poet and also the first modernist  writer in the African continent. The Nigerian negritudist, as he is fondly called, began his writing career in Government College Umuahia. By 1960 he became the first African to be published in the prestigious literary journal, Black Orpheus, that same year he also became part of its editorial board. In 1953 his poem ‘Call of the river nun’ won the best prize in literature in Nigeria’s festival of arts. In 1979 his collection ‘Fishermans invocation’ won the commonwealth poetry prize. In 2005 he bagged the highest prize in Nigeria, the NLNG prize. At 92, he is still actively engaged in literature, he often appears as a guest writer in major literary gatherings. Here he talks about writing, Achebe and Nigerian politics.

JULIUS BOKORU:  What inspired you to writing?

GABRIEL OKARA:  I went to government college Umuahia, there I developed interest in writing because we were exposed to world literature. We read poetry, plays and novels by world famous writers, mostly foreign, then there were no Nigerian writers. So I came across writers like Shakespeare, Tennesson,  Dickens, Hopkins and others. I started writing at the school there. I was a water colour painter and exhibitor in Lagos so my artistic talents started growing from government college Umuahia. My home environment also inspired me, the rivers, the forests, as evident in my earliest poems especially ‘call of the river nun’

JULIUS BOKORU:  How steep was your journey into authorhood, what was the publishing climate like?

GABRIEL OKARA:  Then publishers were actually looking for writers, not now that writers are hunting for publishers. I had no difficulty in having my poems published

JULIUS BOKORU: Unlike your contemporaries you hardly wrote protest literatures against the colonialists, why?

JULIUS BOKORU:  But an overwhelming percentage of your poems were romance with nature

GABRIEL OKARA:  You as a fairly established poet yourself should know that it is that bond with nature that makes us poets in the first place. In large extent I was a romantic, Dickens’ poem ‘the sprig’ inspired me a great deal

JULIUS BOKORU: Are you still comfortable with title ‘the Nigerian Negritudist’?

JULIUS BOKORU: Do you still write?

JULIUS BOKORU: Do you think this current crop of writers are worthy successors?

GABRIEL OKARA:   Yes they are of course. Many notable writers have surfaced in fiction, poetry and plays, I am impressed. Only that some younger ones are now desperate to become authors hence the many poorly written, often self published literature now

JULIUS BOKORU: Who are your favourites in this present set of Nigerian writers?

GABRIEL OKARA:  To me there are two things to like, the skill of the writer and the theme of the writer. You may like the writers artistic skills and dislike his theme vice versa. I have no special interest in this crop of writers but I appreciate many of them, both male and female who are making names for themselves

JULIUS BOKORU: What is your take on Achebe’s passing?

GABRIEL OKARA: I always tell people Achebe is not dead! He lives in the minds of people and that is not death. Through his works, as long as they are read and acclaimed, he cannot die. His passing on is not a sad thing to mourn, rather we should celebrate him. With his internationally acclaimed works, especially Things Fall Apart he has already immortalized himself

JULIUS BOKORU: Did you meet him in person?

GABRIEL OKARA:  Yes, I have met him in person in the US, I even helped him pull his wheel chair once. We once had a TV program together in the US

BOKORU: To Gabriel Okara, who is Chinua Achebe?

GABRIEL OKARA: Chinua Achebe is a brave and fearless writer who calls a spade a spade, not calling a spade an instrument of excavation. I admire most his stand against cultural colonization which brought about Things Fall Apart the most famous of his books

JULIUS BOKORU:  What’s the difference between the Nigeria you grew up in and the Nigeria of today, any progress?

GABRIEL OKARA:  Well, there has been a lot of progress. Culturally, no and yes. No and yes because the western influence has sought of eliminated some of our cherished traditional values which brings about  what my friend professor Claude Ake calls ‘militant materialism’ which is the passion for material things and the desperation to get them. That militant materialism has eroded  our traditional values that’s why corruption has overtaken every section of our private and public service. In our Ijaw tradition this bribe taking is called Ngara and it was highly abhorred. If any one was caught taking or giving Ngara he was sort of ostracized. Ngara has spoilt Nigerians

JULIUS BOKORU: Are  you impressed with the leadership of Goodluck Ebele Jonathan?

GABRIEL OKARA: Well, Jonathan is one of those people that found themselves in positions that they did not really aspire, that doesn’t mean that he is not seating well in that position or is uncomfortable. As deputy governor, governor, vice president, that has been his training for his ascension as president. As for whether he is doing well or not, I think he is doing much that can be expected of him as a new person in the position of president. He doesn’t make much noise as other governors and presidents, he is just facing a situation that is as critical as the civil war. Jonathan is being misunderstood. I know that the main thoughts in his mind is the growth of Nigeria but the immediate problems like terrorism in the country seems to slow down the pace of progress he envisages. I am optimistic still that Jonathan’s vision will grow to full bloom in years to come

JULIUS BOKORU:  Writers are sometimes regarded as prophets, on Nigeria’s future, any hope?

GABRIEL OKARA:  Yes of course, since we have people who are speaking without fear. I quote my friend once again professor Claude Ake, the whole country is enveloped in militant materialism. Everyone now thinks about money, about cars, about houses etc. So elected officials becomes self service politicians instead of service to the people.  In  spite of all this we have people speaking against this. So I still have hope that this dark cloud will pass. This dark cloud will soon be blown away by a new group of people, writers, activists and ordinary countrymen. There will be no more inter religious conflicts, no more inter tribal conflicts, no more misery and self pity and corruption.  All these will pass away and Nigeria will live to her destiny, one great undivided country

GABRIEL OKARA: The younger ones are in too much of a hurry to get published, and when they do their works show that haste in a poor production. Read and write when they are inspired. If they have the talent it will blossom forth in due time. If you pour too much water to make a flower grow, the end is that the flower will drown in that water. They shouldn’t be in a rush, they have to be patient for their works to be admired and appreciated.