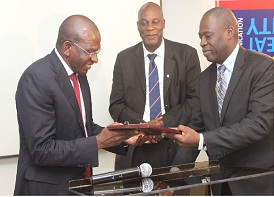 With such huge earnings practitioners and businessmen from Hollywood and other global equivalents can no longer ignore Nollywood.

The phenomenal growth in Nigeria’s movie industry, Nollywood, has earned it global recognition as the third biggest in terms of revenue earnings after America’s Hollywood and India’s Bollywood, the Managing Director of the Nigerian Export Import Bank, NEXIM, Roberts Orya, has said.

Mr. Orya, who was a guest lecturer at the Distinguished Lecture Series of the Pan-African University, Lagos, said the Nigerian film industry has literally upstaged the global movie world through its innovation, imaginativeness and prolific performance, resulting in revenue receipts of about $300million to $800million per annum in revenue earnings in recent years.

With such huge earnings, Mr. Orya said, practitioners and businessmen from Hollywood and other global equivalents can no longer ignore Nollywood, as is being manifested in several joint collaboration movie works in recent times.

The Nexim MD, who spoke on the topic: “That They May be One: Towards a Greater Synergy Between Nexim and the Creative Industry”, noted that Nollywood is today globally adjudged as the most prolific film industry with consistent production of more than 2,000 titles in Nigeria’s three major languages every year since 2008. He also pointed out that Nollywood has very high prospects for growth and sustainable development.

He said a combination of advantages, including prevalence of a high pool of creative talents; strong and growing domestic entertainment industry; established overseas market demand in Africa, UK, USA and the Pacific Islands; coupled with huge Diaspora population, would spur the industry and its practitioners to greater heights.

Government’s attention and recognition of the industry has been a major incentive, he said, adding that apart from the industry’s contributions to create employment opportunities for Nigerian youths, it is also a foreign exchange earner, to justify the Federal Government’s support through a $200 million (N30 billion) Entertainment Industry Fund and the N3 billion grant recently announced.

Despite the encouraging incentives, Mr. Orya said the industry still faces a number of challenges, including very low production for theatrical releases and cross-border co-production arrangements as well as inadequate exhibition/theatrical infrastructure, which he said are militating against it realizing its full potentials.

“It is unbelievable that a country of more than 170million people currently has less than 60 modern screens in multiplexes located in five cities, namely Abuja -15, Lagos – 17, Port Harcourt -14, Enugu – 5 and Uyo – 6. This, when compared with India, is one of the lowest in the film market, with India having over 13,000 screens translating to 12 screens per million people,” he said.

Nexim Bank’s funding support to the industry under its “Export of Services” mandate in line with the present administration’s policy, he said, has grown from about N460 million, provided in support of efforts to boost distribution infrastructure/platforms and the establishment of new digital production studio, to over N778.5 million, with applications for over N26 billion still being processed.

Mr. Orya was invited for the lecture in recognition of the contributions of Nexim Bank in growing Nigeria’s Gross Domestic Product, GDP, through promoting export-oriented investments in the non-oil sector and initiating several interventions to boost investments in the creative arts industries.

In his introductory remarks during the lecture, the NEXIM MD noted that the creative and entertainment industry is a key driver of global growth, capable of contributing to sustainable global economic recovery. He pointed out that during the recession, the creative economy continued to thrive, as people depended on cinema and museums, music, videos and TV shows and video games to get some psychological relief.

On capacity building, Mr. Orya said Nexim Bank has been working towards ensuring that the industry operates in a structured manner and within global best practices/standards. He added that it is currently collaborating with various stakeholders to develop a draft operating guidelines to enhance access to loan facilities with inputs from various stakeholders, including practitioners and regulators.

He said the bank has commissioned a study to review the industry and develop/recommend the best financing programme/instruments for the Nigerian Entertainment Industry based on the Bollywood financing experience, among others.

To further strengthen and deepen the growth of the industry, he stressed the need for the establishment of an Entertainment Industry Guarantee Fund to boost the credit delivery system and facilitate flow of credit to the industry.

According to him, this would be akin to the Cultural Industry Guarantee Fund, established by Francophone West African countries in conjunction with ECOWAS Bank for Investment and Development, EBID, which was intended to facilitate bank financing of cultural industries in the Francophone states.

Other proposals include ensuring a Copyright Enforcement regime and intensification of the Reform System of the Nigerian Copyright System; design and issuance of sector specific policy instruments by the insurance industry like completion bond, insurance policy, among others.

“There is a strong need for government to consider the establishment of the National Film Development Fund, NFDF; provision of sector specific investment/tax incentives regime, especially towards the establishment of digital studios as well as Cinemas/Multiplexes, to address the issue of low cinema screen density as well as to operationalize the Nigerian Film Institute campus in Lagos to complement the Jos Campus along with other private sector initiatives to enhance human capital development in the industry,” he said.

The Dean of the School of Media and Communication of Pan African University, Emevwo Biakolo, urged Nexim to consider establishing a collaborative relationship with the institution towards linking film and entertainment professionals with investors as means of increasing financing for content development, infrastructure and capacity development.

No Amnesty for Enemies of Life by Chukwuemerie Uduchukwu