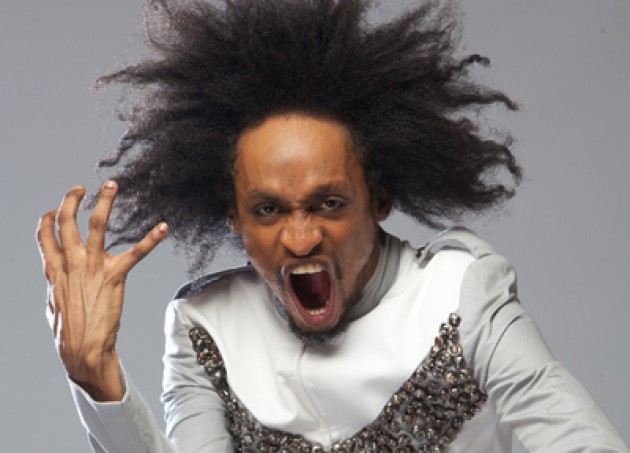 Denrele alerted his followers during the robbery incident in Lagos.

The Yaba, Lagos, home of grieving Channel O Vj,  Denrele, who is still mourning the death of his best friend and business partner, Goldie, came under siege in the early hours of Sunday after five armed men robbed the occupants of their belongings.

Denrele, who has been off the social media network since Goldie’s death, announced the incident in the wee hours of the night to his over 82, 269 Twitter followers. Although a good number of them felt the eccentric TV personality was only joking, his persistent call for help from the Adekunle Police Station, which is a stone throw from his home, evoked a sense of urgency.

According to tweets on his page, he was visiting his family- which included his 72-year-old dad, 86-yr-old grandma and three female cousins, one of whom just delivered a set of twins- for the first time since Goldie passed on.

In his tweets, he said despite the fact that one of the robbers recognised his face, one of them almost shot him but for his grandmother who begged them.

He also said one of the armed robbers almost strangled his grandmother.

Here are a few Denrele tweets; more could be read on his Twitter handle, @Derenle_Edun.

“I&#039;m still grieving over my late Goldie 24K,jst did her candlelight, came to our family house to assure my peeps I was ok and now this?#It isWel”

“HA! U fink say na joke? Not a funny scenario o! Them point gun for our head.”

“The Lord is our strength. May we never witness such again. I appreciate una o! Omo mehn, one of them wan shoot me but my Granny beg am tire!”

“My family is safe but just in shock. Kudos to my smart kid sis who hid her IPad under the bed and dressed up sharply. My Grandma is in pain.”

“Just left Adekunle police station. Wrote my statement. Thnx to every1 who alerted the police. I got a couple of calls at d station frm y’al.”

“I’m in the house wit my younger sis, 72 yr ld Dad, Family house on Borno way very close to Alagomeji B/stop and Casino cinema right at Faneye junction. Pls help. We have no phones to call.”

“We don’t have any phones to call. Pls help. My 72year old Dad and 86 year old grandma are in shock. Somebody alert Panti police station o.”

“Help pls! Our family house in Yaba was just robbed. Everything carted away. Pls alert Panti police station. My grandma was almost strangled.”

“The thieves threatened to shoot me in the eyes if my grandma hadnt begged for mercy. Someone alert the Panti police station. We are phone less.”

“My Sister threw my IPad under d bed the moment the thieves burst in. Someone help pls! My family house in Yaba was broken into. Someone help.”

“HELP! My family house was just robbed! Five armed robbers broke into our house and carted everything. My grandma and Dad r in shock Help pls.”