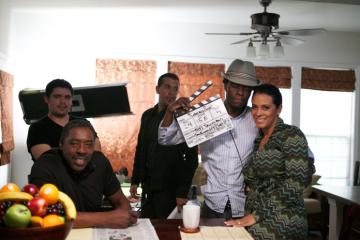 How the CIA almost disrupted my movie production- Niyi Towolawi

Owing to the state of insecurity being witnessed in various parts of the country, it is a tough call trying to convince and guarantee the safety of lives and equipment.

These challenges and more are some of the issues that United Kingdom based Nigerian movie producer, Niyi Towolawi, had to confront while shooting his latest film titled “Turning Point.”

Shot on location for five weeks in New York, Philadelphia and Delaware, all in the U.S., and Nigeria, between October and November 2011, Towolawi, who has a degree in Mathematics from the University of Manchester, and a Masters in Computer Science from Oxford University in the U.K. shared some of the hurdles he had to scale through.

He says, “When my crew members were trying to get their visas, they were advised not to come to Nigeria. The CIA has a very comprehensive website that talks about the risks in Nigeria which says they were 70 per cent more likely to be kidnapped and there are tons of diseases and threats. It took me two months to convince them (CIA) that Nigeria is a safe country. Luckily, one of them knew someone who came to shoot a commercial here in Nigeria and he was like it(Nigeria) is the best place he has ever been to and that kind of convinced them a bit. Besides the equipment that was brought into the country was worth $200,000 and they could not get insurance in the US to actually bring it into Nigeria and I could not get them in Nigeria as well. I had to convince them to bring them along.”

Full of optimism with regards to the positive responses the movie will generate when it begins showing in Nigerian cinemas in a few weeks time, Towolawi’s face lights up in a smile when he recollects the great time the cast and crew had while shooting in Nigeria.

“They ate Suya everyday and then I took them to Kuramo Beach were they ate Indomie noodles and fried eggs and took tons of pictures. Then we went to Obalende market and area boys came out in droves then the key grip (person who supervises all grip crews and reports to the Director of Photography) from new York, who shot videos for Biggie, Tupac and other artistes showed some of the videos to the area boys. Surprisingly, one of them rapped to the songs. we had hundreds of area boys participating in the film without asking for payment. When we were leaving, they were all taking pictures,” he said.

The film tells the story of a U.S based Nigerian investment banker that bows to family pressure to abandon his American sweetheart for an arranged wife from home. His life turns upside-down when the marriage turns out not too rosy, setting off a chain of events that forces him to confront his reckless past.

Banking on the unprecedented success that greeted his 2007 debut movie, Twisted, despite having little or no knowledge about Nollywood at the time, Towolawi hopes to replicate this a second time.

“If (Twisted) the first diaspora movie made before there was cinemas in Nigeria could have a UK release despite being a very ‘small’, ‘humble’ film, (it) provides me with so much hope for Turning Point.”

The story line does not deviate from the regular themes that have come to be associated with movies made by Nigerian-born film makers who are based abroad, such as cultural identity, clash of cultures, ethnic prejudice and quest for survival in a foreign land. Towolawi hopes to correct the erroneous impression that is being held by foreigners in terms of the quality of Nollywood films.

To breathe life into the characters, the producer who has some short films, music videos and a feature film to his credit, employs the creative abilities of African actresses that include Patience Ozokwor; Oge Okoye; Ghanaian Sweetheart, Jackie Appiah; and Igoni Archibong, just being introduced as an actor. He also goes a step further by starring them alongside established Hollywood actors like Lauren London, Ernie Hudson, Todd Bridges, Cynda Williams and Joe Estevez.

“These are established actors in Hollywood and have featured in top rated films and series like Law and Order, Everybody Hates Chris, Apocalypse and Spanish Fly respectively,” Towolawi adds.

I have no goal target for AfCON 2013- Emenike