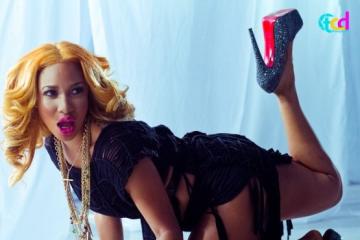 Pheww!!! Thank God Itz Ova; after having waited with bated breath to catch a glimpse of Itz Ova, the new video by Nollywood bad girl turned singer, Tonto Dikeh, that is all the viewer may be forced to say.

Here’s a little spoiler alert. You may not go pass the first two minutes, except you intend to fall asleep mid way.

But despite the less than enthusiastic response to her earlier singles, Nollywood ‘bad girl’ turned singer, Dikeh, makes good on her promise to churn out a series of new videos.

With heightened suspense that has lasted for weeks, it is not surprising that within an hour of its release, the 4mins 6 seconds long clip has attracted over 300 views.

Aptly described by critics as an ‘aggressively unapologetic recreational music venture’, the Rivers State born artiste put up in the new video, a brazen display of flesh.

Although one is tempted to overlook the raunchy and near-nude appearance by her back up dancers who looked a lot more like strippers, the excellent picture quality of the Gbemi Philips/Sneeze abstract shot video is commendable.

Earning the support of her colleagues, Rita Dominic, Uti Uwachukwu, Terry G and comedian A.Y, whose numerous tweets have heightened the suspense, Dikeh is no doubt leaving no stone unturned as she hopes to make the best out of her music venture.

In the typical Tonto Dikeh #POKO fashion, the video has a lot going on. Standing out as a Jamaican dancehall queen, Patra’s wannabe, and featuring an unknown dancehall act Snypa, the generous amount of auto-tune voice enhancer only worsens Dike’s disastrous attempt.

Without a doubt, Dikeh’s awful voice and over-exaggerated moves, provides some comic relief.

Of all her songs, Itz Ova was close to ‘helping her out’ and would have been the saving grace while Snypa’s ragga delivery lifted the song despite Dikeh’s lackluster lines.

Truth be told, in Nigeria anyone can be a musician with the right packaging and hype as a terrible voice ‘may’ be overlooked. But just how does one comprehend coming to terms with a singer who got it wrong right from the word go?

Rather than concentrate on improving her acting skills, it has become pretty obvious that Dikeh, enjoys being in the news, albeit for the wrong reasons.

For a track and video made for the 2013 market and beyond, at the end of the day, one thing is certain, Dikeh’s 150,752 Twitter fans aren’t enough to make her a music super star.