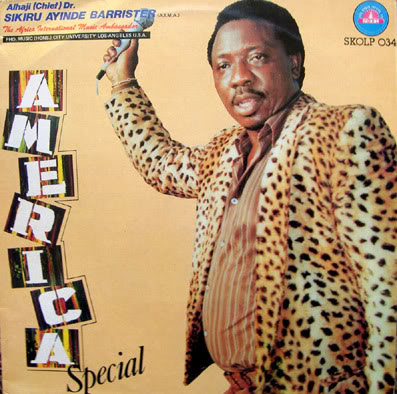 Having listened to all his records from the first to the last, I came up with the following facts as recorded by late Sikiru Ayinde Barrister (SAB) himself.

Forget any hearsay or rumours.

SAB created Fuji, but still referred to himself as Ajisari/Ajiwere until 1973/74. The name Fuji emerged for the first time in his album titled Alayinde Nki yin, released around 1974.

The first person SAB serenades in his record is one Madam Mulikatu Abeje Adeyemi; he also mentioned two of his children: Kubura and Rasaki.

He mentioned his mother, Alhaja Odee Sifawu, for the first time in his vol 6 album released in 1975.

He drew inspiration from the likes of Olatunji Yusuf, Lefty Salami, S Aka, Haruna Ishola etc.

Alhaji Muniru Gbadamosi was SAB’s benefactor who later worked for him as his chairman managing director of his organisation.

Ayinla Yekini Agbaje who was also an Ajisari was SAB’s half brother, also Nosiru Ajagbe another half brother played Igba, in his group.

Fuji Londoners last work with SAB was Oke Agba in 1980. He put together another group same year releasing the Aiye album the same year.

SAB remained the only Fuji artist to be given the national honour till date.

Honour is due to the man who spent his entire life giving us the best of the best songs of our time.

Anyone with a contrary opinion on any of the above should voice out. I’m willing to refer to his album to clear the air.

This article was first published on the Facebook page of Sikiru Ayinde Barrister’s fans.