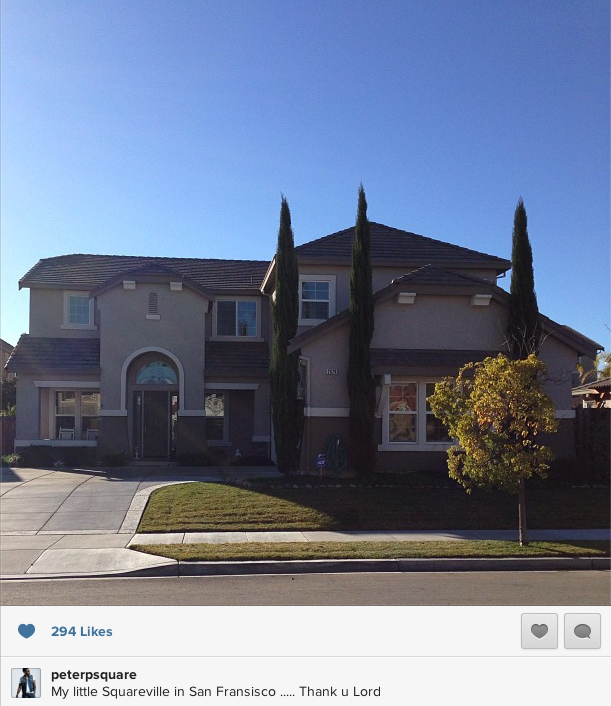 The news was made public after Peter, one half of the twin, recently posted photographs of their latest asset on online photo-sharing and social networking service, Instagram.

The 31-year-old singer also posted photographs of various sections of the home and could be seen cooking with Lola Omotayo, his girlfriend of many years and mother of his son, Cameron.

Although there has been no official statement from his label, Square Records, with regards to the true worth of the property, various sources allege that the estimated property value for the house is $2,750,000 (N434, 500,000).

According to netng.com, the US housing system supports mortgage system payment. We’re told Okoye will (give or take) be paying about $12, 323 (N1.95m) a month.

When contacted, the group’s publicist, Bayo Adetu, said they are choosing to keep mum on the price of the property but confirmed that the home, dubbed Squareville, belongs to the group. He also added that it is also the second home to be bought by the brothers, with the first being in Omole Estate, Lagos in 2010.

In a similar vein, Paul Okoye, who appears to be the more withdrawn of the Psquare twins is also preparing to be a father soon as his girlfriend Anita, is currently on a nine months course.

“Congratulations to Anita and @rudeboypsquare am sure its gona be a boy like me.#bigsmile,” @PeterPsquare tweeted.

The mum-to-be is a post-graduate student of the University of Dundee in Scotland. The couple who have been quietly engaged for a while plan to get married soon.