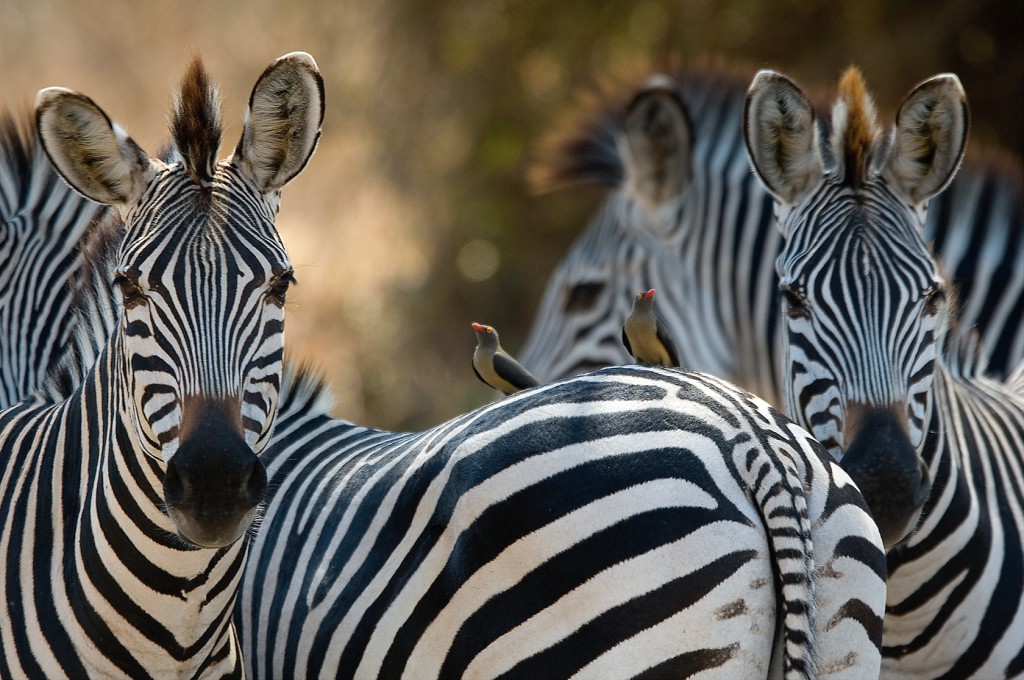 At the Chaminuka Nature Reserve, Zambia’s first private wildlife park, it isn’t the presence of a fairly large number of wildlife that immediately grabs your attention. Much as the advertised existence of 72 species is impressive enough, it is the familial interactions between and within the species that form a quick impression.

Sighting a herd or a lone animal is purely by chance. Half the time on the safari ride through the 10,000 acres of land, you pray that a group or two make an appearance. In the end, if you are fortunate enough to view as many animals as I did on this sunny July afternoon, you are left with an eerie feeling that you have just caught a glimpse and had a wee taste of community life in the animal kingdom.

At first glance, one may merely see two Ostriches making their way through a herd of Zebras. If you look closely and listen attentively to the guide however, you will quickly realize that the two Ostriches are actually lovers. Why, not long after we happen on them, you observe the male Ostrich performing a mating dance. His wooing technique fetches him the prize and when he struts away after the quick session, you cannot help but notice how much like his counterpart in the human world he appears.

In his world, the male Ostrich, described by our tour guide as ‘polygamist’, is the head of the home.

“Male Ostriches are polygamists. Each one controls about six females,” our guide, who gave his name as Moses, announces. I must admit, I feel slightly irked by this. It is the same offense I feel when men try to explain why they cannot stick to one woman; something about the man’s nature, I am often told.

Well, so nature has made the Ostrich promiscuous, I beg your pardon, polygamist. It is not difficult to see why. He is clearly much nicer looking than the females. This male is not just bigger- standing at about 2.5m- his black and white feathers are more luscious. When he performs his mating dance, he spreads his feathers similar to what the peacock does, and swirls around and around. It is a beautiful sight and I may just have to pardon the two female ostriches that follow him dutifully as he makes his way through the herd of Zebras after his feat.

This family of Ostriches, two females and one male, co-exist happily with the family of Zebras.

“They live in harmony because they are all grass eaters. They are happy living together,” Moses tells us.

The Zebras cut a fine picture of black and white, with robust muscles. Our guide claims this specie is the finest in Africa, adding that they are generally more healthy looking than other animals because “Zebras are non-selective eaters”.

In this world, I am happy to announce that there is a measure of gender equality in the family life. The home is led by the male Zebra and a dominant female.

According to our guide, Zebras “walk in a single file with the female in front”.

It is not long before we happen on a family of Sable Antelopes. These beautiful creatures look like “a combination of a goat and a horse”. Our guide explains that these are rare animals that were imported into Zambia at $8,000 (N1.2 million) per animal.

This is a matriarchal family. “The females are in charge,” our guide says.

Chaminuka Nature Reserve boasts of a huge number of animals. On this safari ride, we found Buffalos, Blue Wildebeests, Tahzamas, Wart Hogs, Impalas, Tsessebe Antelopes, Kafuwe Lechwes and even sighted a Brown Snake eagle. Each group has a unique behaviour and family arrangement.

Some animals stand out for their beauty; others for their characteristics. It was certainly interesting to find out that the ‘Bush Antelopes’ move about in pairs– husband and wife (boyfriend and girlfriend if you like) or mother and child. The Kafuwe Lechwes, that do not ever go “more than 2km away from water” and are thus vulnerable to hunters, can transmit Tuberculosis to their human hunters.

Our guide has special respect for the Buffalos.

“In my view, Buffalos are the most dangerous animals among the big five. When a Buffalo charges at you, you know that you are in deep trouble,” Moses said and quickly advised that when faced with a Buffalo, running is out of the question; this would be a good time to use a gun.

In all, two animals had me spellbound.

The first is the Giraffe. This family of two, a mother and child, redefined for me the meaning of elegance. Mother Giraffe, the epitome of feminine elegance, is at once shy and proud.

With a height of 5.5m, one would expect her to be clumsy; how can a creature with a neck reaching into trees not be? But not this lady, she’s having her lunch off the top of a tree, far higher than our Safari truck, but she eats so daintily, you are quickly reminded of royalty. When our loud-mouthed group interrupts the dove-eyed lady, she looks at us disapprovingly and slowly turns and strolls elegantly away, her cute daughter in tow.

Our tour ends in a secluded section of the park. Unlike the rest of the park where animals roam freely in a manner almost identical to their natural habitat, this 20 acres of space is deliberately fenced both to prevent entry as well as exit.

This is where the lions in the Chaminuka Nature Reserve are kept. The family of four, made up of a father, mother, cub and grandmother are pampered and treated as royalty. The den is made up of the seven year old father; Grandmother, over 15; mother, 13; and the cub who was born in the first week of December 2011.

The lions are secluded and fed by the managers of the park, “once or twice a week,” on a variety of animals found in the park.

As our group happens on the family, we become awestruck and silence envelopes us. The chatter gives way to deafening silence as the Lion who was taking a nap after a meal of wildebeest wakes up and strolls towards us. He moves with an easy grace of a creature that is in charge.

When he belches out a roar, it becomes immediately clear why this animal is often described as the king of the jungle. It is not so much his awesome build or the power of his roar as it is the sheer magnificence of his presence.

It appears that this lion is used to being a spectacle because after the half-hearted roar, he walks up to the barbed wired fence that separates our group from his family, showing off his well-built muscles. We scuttle back even though we are certain that the creature cannot possibly bite through the metal. Next he flops on the floor, rolls around a bit and then proceeds to lick away at his huge paws, quite like a domestic cat would.

The creature’s actions make me want to think that this is just another cat, but the truth is, there is nothing ordinary about this 500pound cat.

Even when our guide tries to play down on the myth surrounding this majestic creature, describing him as a “lazy animal that can rest as much as for 20 hours in a day”, the feeling one has after seeing a lion is that one has just met with a king.