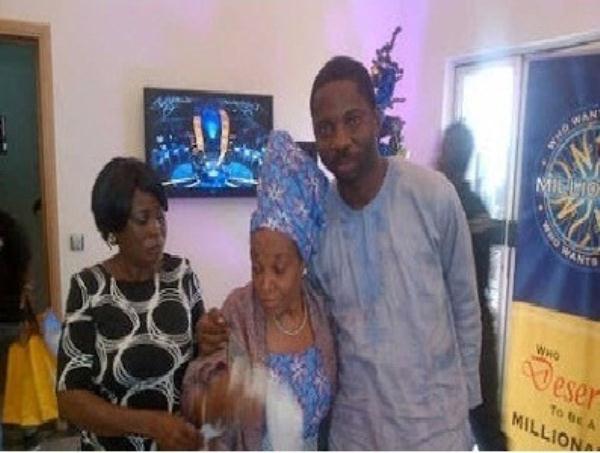 Ngozi Nwosu at WWTBAM with Oloketuyi

The Nollywood star Ngozi Nwosu, needs the money for treatment

This is definitely not the best of times for Nollywood. This year alone, the industry lost veteran stars like David Ihezie, James Iroha, Lekan Lekinson and most recently Enebeli Elebuwa to various ailments.

And just as many are yet to get over Elebuwa’s death, Nollywood star, Ngozi Nwosu, who played “Peaceful Peace’, one of the troublesome wives of Chief Fuji (played by Kunle Bamtefa) for over 20 years in Fuji House of Commotion, is currently battling Heart and Kidney related ailments.

Earlier in the year, speculations were rife that the actress was treating HIV/AIDS related conditions. The once boisterous artiste kept mum and subsequently went underground.

It was not until Saturday December 15, 2012, when she appeared as a guest contestant on the popular TV game show, Who Wants to Be a Millionaire, that the picture of her ailment became glaring to all.

The actress who was a recipient of the One Million Naira that was won on the show on this day to help aid her treatment was assisted by entertainment journalist, Seun Oloketuyi.

It was also ironical that Nwosu appeared on the show a few years back to play for Usman Pategi, popularly known as ‘Samanja’ and little did she know that a few years later, she will be on the hot seat playing to raise funds for herself.

Narrating his encounter with her on the set of the programme, Oloketuyi said, “One of the first signs that things were no longer right with Ngozi was the fact that we had to delay recording because while everybody else was virtually fanning themselves due to the studio lights, Ngozi was shivering from cold so much that the producers had to get her cardigans. I was flustered. When the programme eventually got underway, Ngozi still helped to answer some questions.”

According to Oloketuyi, he was invited to participate in the game show and had no inkling that the actress was going to be his partner. The Director only informed him few minutes before recording began when Nwosu sauntered in.

“When we probed further on what exactly her ailment is, Ngozi wouldn’t say but instead invited me to her home. Last Sunday, I was Ngozi’s guest, where she showed me results of tests stating that she had kidney and heart-related issues. I spent hours in her house as she led me by the hand through the whole gamut of her illness.

“She told me she decided to divulge everything because of widespread speculation that she was HIV positive. “I don’t have AIDS o,” she declared. The bottom line now is that Ngozi needs N6m to treat herself abroad. And she needs it fast. Ngozi is willing to live longer but we have to support her. If you would like to help her, then send your widow’s mite to Ngozi Nwosu – GTBank – 005285167,” Oloketuyi adde