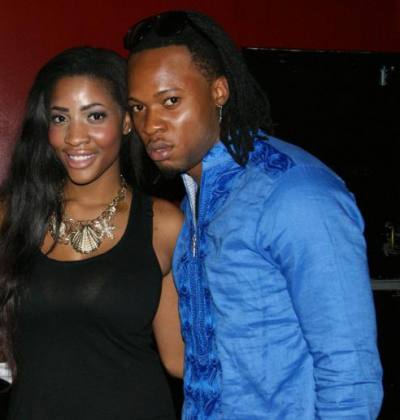 Flavour asks ‘enemies’ to let his relationship with fiancée, Beverly Naya, be.

This tales gave rise to various tales that the dreadlocked singer had called off the engagement. Although Flavour, who has also been linked to quite a number of women kept mum over the issue, Naya on the other hand, took to Twitter saying that they were still ‘rock steady.’

The news is now that exactly seven months after, the singer who recently commissioned his night club located in Enugu State, has dedicated a track on his latest album titled Blessed , to his lover, putting to rest the rumours of a break up.

Although details of how the pair met is rather sketchy, various sources say, they both performed separately at the Ayva Center in Houston, Texas, in December 2011 and then met up again in January when Beverly paid a three-week visit to the singer.

Born Beverly Chioma Ukegbu and also known as Beverly Heels (aka B.Heels), the aspiring Pop singer resides in Houston, Texas. She earned the  nickname ‘Heels’ because of her love for high heel shoes.

Nigerian jailed for 20yrs for human trafficking, rape in UK