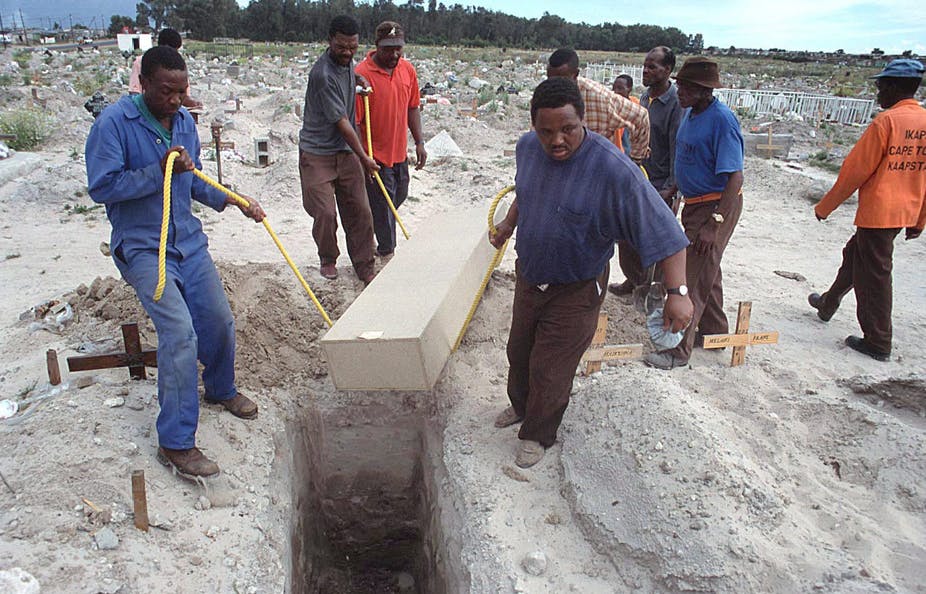 A victim of the Aids pandemic is buried in Cape Town in 2004. Kim Ludbrook/EPA

As COVID-19 becomes the most intensely covered virus in history, there are important lessons to be drawn from the media’s reporting of another global pandemic: HIV/Aids.

Whose lives the world deems worthy of saving depends, at least partly, on the stories that journalists tell. This was one of the findings of my research into British media coverage of Africa’s Aids pandemic, in which I analysed 1,281 news reports between 1987 and 2008.

At the height of that pandemic, journalists helped to expose how intellectual property laws and the business models of big pharmaceutical companies disregarded the health needs of those living in poorer countries. Such reporting played an important role in creating the political momentum for the mass roll-out of life-saving treatment across the global south.

But Aids also provides a darker lesson about the capacity of the media to normalise millions of deaths taking place around us.

Burying the story – and the dead

Until the late 1990s, millions of people dying of Aids-related causes across sub-Saharan Africa were a non-issue for the British media, much like the initial wave of coronavirus deaths in China barely registered on the international media radar. My analysis showed that BBC News reported only 14 times about Aids in Africa between 1987 and 1995, mostly in passing. The Financial Times carried a mere 18 stories in the same period.

Little changed following the discovery of life-saving antiretroviral therapy in 1996, which remained out of reach for the majority of people living with HIV/Aids. In 1999, there were more than 24 million HIV-positive people in sub-Saharan Africa. Some countries saw prevalence rates rise above 20%. Yet, by then the pandemic had merited just one front-page story in the British press.

As late as 2001, The Economist concluded that: “The world is not going to rescue Africa from Aids. Only Africans can do that, by changing their behaviour.” The spectacular concentration of the pandemic in Africa, Economist readers were told, was driven by Africans’ presumed hyper-sexuality, cultural “myths” and the incompetence of the continent’s leaders. Poverty was also to blame, since, as the magazine wrote in 1998, “those who cannot afford television find other ways of passing the evening.”

Rooted in thinly-veiled racist assumptions, these assertions steered attention away from the ways that the rules of the global economic order undermined the public health capacities of developing countries.

The global Aids pandemic has been shaped by the complex interplay of epidemiological, behavioural and cultural factors. But its unequal distribution is also linked to the punishing legacy of external debt and conditions for governmental reforms imposed on the continent by the IMF and World Bank. Stephen Lewis, the UN’s former Special Envoy for HIV/Aids in Africa, denounced this as “a form of capitalist Stalinism” that decimated Africa’s health care infrastructure during the 1980s and 1990s.

Yet, in more than two decades, I found only one instance that explicitly linked the Aids crisis to Africa’s encounter with neoliberalism. Published in The Guardian in July 2000, it was a letter to the editor by a medical aid worker entitled “Our guilt in the land of the dying”.

It is this capacity of media reporting to mask the way that pandemics are shaped by the world’s grotesque inequalities that is perhaps the most disquieting finding of my research as COVID-19 spreads to countries with fragile health care systems.

Of profits, patents and power

The struggle over access to life-saving HIV medicines that took place at the turn of the millennium showed that this need not be the case. Pitting the world’s powerful pharmaceutical companies against a coalition of activists and NGOs, the international media became a central arena in which this battle unfolded.

In the early 2000s, Aids suddenly became the subject of front-page news, op-eds and investigative reports as journalists shone the spotlight on the murky world of international trade politics, exposing how western governments were colluding with drug companies in protecting their patents.

The story of profits, patents and power became enveloped in deeply empathetic accounts of human suffering. Aids sufferers were no longer mere objects of our pity or moral judgement. They now had names, families, friends, and tangible places of origin, as in The Guardian’s “Saving Grace” series from Malawi. This period was exceptional in the history of the media’s treatment of HIV/Aids – though since the mid-2000s coverage has declined sharply.

As the search for COVID-19 vaccines intensifies, journalists must aggressively question whether governments and pharmaceutical companies are enacting all measures to ensure universal access.

It’s déjà vu for those who led the campaign for access to affordable Aids drugs. Alarmed by the prospect of profiteering by big pharmaceutical companies, they are concerned that coronavirus treatments may again remain out of reach of the less privileged.

There are some hopeful signs that big pharmaceutical firms will not seek to aggressively assert their monopoly rights. Perhaps they are fearful of another monumental public relations debacle, as occurred when a number of pharmaceutical firms sued the South African government over Aids drugs in 2001. Still, some experts are less sanguine about COVID-19, and fear it will be pharmaceutical companies who ultimately decide who lives and who dies.

How COVID-19 will end depends, in part, on the script that journalists write and their ability to tell stories that acknowledge pandemics are always rooted in the history of accumulated global inequalities – and so our own role within them. With all eyes on the coronavirus, it’s sobering that HIV/Aids continues to claim almost half a million lives in sub-Saharan Africa alone every year.