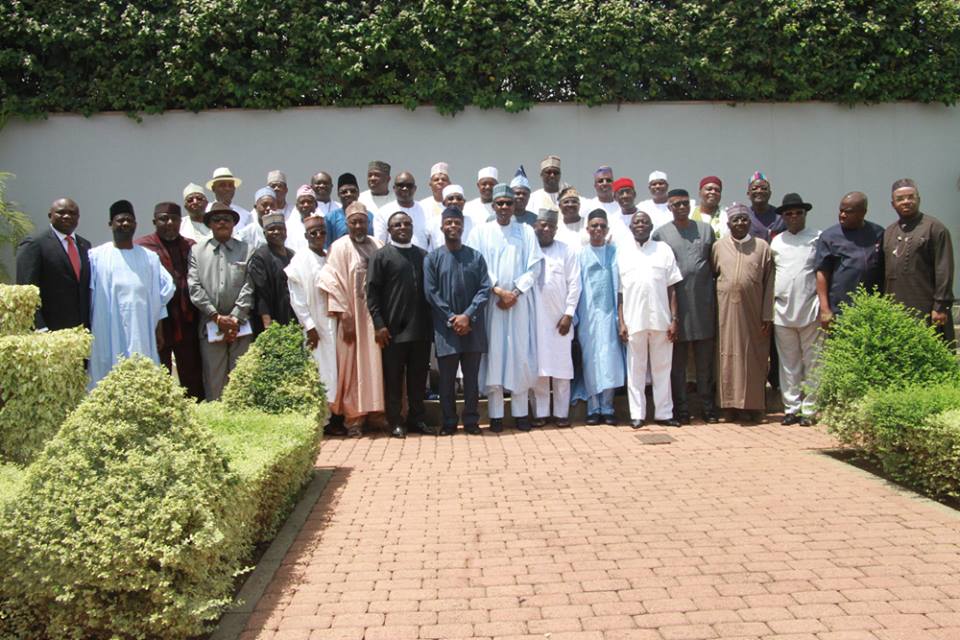 Nigerian governors have told President Muhammadu Buhari that the mode of distribution of palliatives to vulnerable Nigerians affected by the coronavirus impact must be reformed.

The Ekiti State Governor, Kayode Fayemi, on Tuesday, briefed Mr Buhari on the limitations of the distribution of palliatives to vulnerable persons to curb the economic impact of the coronavirus.

Mr Fayemi spoke in his capacity as the chairman of the Nigeria Governors Forum (NGF) during a teleconference with president.

The details of the meeting were made available via a statement signed by the NGF spokesperson, Abdulrazaque Bello-Barkindo.

Mr Fayemi informed the president that there are people from the informal sectors who live on daily income and are yet to be included into the world bank assisted scheme, the National Social Register (NSR).

He noted that such persons are exempted from the Conditional Cash Transfer programme.

He cited the “Ecuadorian Alternative“ where the poor and vulnerable people flocked into the streets in violation of the stay at home order in their country.

Mr Fayemi said the plight of the missed Nigerians need to be quickly addressed before the situation crumbles into such a scenario.

The NGF chairman also urged the president to instruct the relevant authorities to use the machineries of the state governments “so that the palliatives would penetrate all nooks and crannies of the country.”

The official explained that the “palliatives would be even more meaningful if they were distributed through the state governors.”

In his first national address on the COVID-19 outbreak two weeks ago, President Buhari ordered palliatives be given to poor Nigerians who are considered the most affected during the ongoing lockdown in three states.

The minister of humanitarian affairs, Sadiya Farouq, said her ministry had begun the distribution of N20,000 each to the households captured in the NSR.

However, there have been widespread controversies around the identification and selection of vulnerable persons in the NSR.

The leadership of the National Assembly had also called for a total review of the process.

The state governors, who seem not to be confident in the scheme, therefore, approached the minister of communication, Isa Pantami, to provide them with data to help identify ‘vulnerable’ persons across the country.

Ms Farouq has since resolved to hand over the relief materials to the state governors for proper distribution.

She also said her ministry had begun the ‘digitisation’ of the cash transfers and other programmes under the NSIP.

She explained that her decision followed the widespread criticism surrounding the distribution and identification of members of the population benefiting from the palliatives.

Perhaps to address the controversy, President Buhari, in his second address, appealed to Nigerians that his administration is aware of the hardship following the lockdown.

He later announced that an additional 1 million households would be added to the NSR up from 2.6 million.

The NSR is an initiative under the National Safety Net coordinating office, NASSCO in collaboration with the the Youth Employment and Support Operation (YESSO), a World Bank assisted programme. It identifies the poorest households in given communities.

In the communique, Mr Fayemi said he also discussed issues of the dwindling economy as a result of the outbreak.

He said state governors are going through tough times and would like to appeal to the president to take decisive decisions to ameliorate the sufferings of the Nigerian people.

The official told Mr Buhari to streamline all multilateral and bilateral interventions and funding so that states are also integrated and considered because of the difficulties they are going through.

He thanked the president for the release of $150 million to augment projected FAAC shortfall in June but added that more needs to be done to keep the states properly afloat.

“More needs to be done,” he reportedly told the president.

The fund is a special one established by the federal government to conserve funds the government can draw from to cushion the impact of a serious economic crisis and national emergencies.

The official also urged President Buhari to utilise revenues from the Liquified Natural Gas, LNG, which he said could help in assuaging some issues related to revenue shortfalls.

He also appealed to the president to look into the possible suspension of all deductions by the federal government so that states can address the COVID-19 challenge from a position of economic strength.

Responding, President Buhari reportedly urged Mr Fayemi to formalise all the requests of the governors and forward them to him, promising they would be promptly addressed.