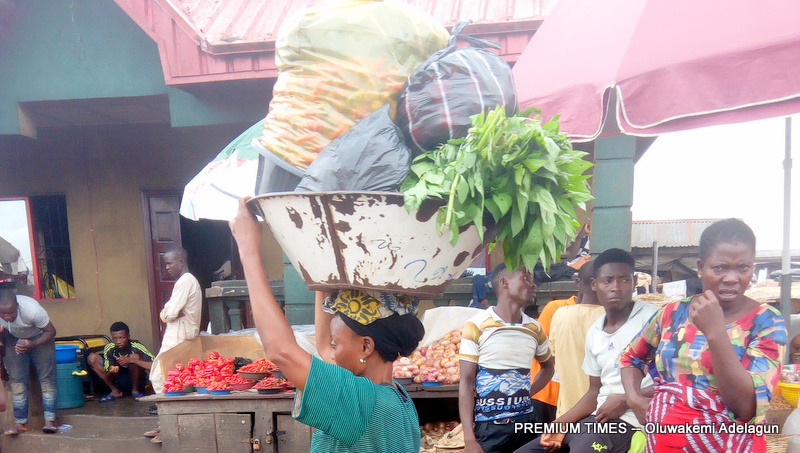 SPECIAL REPORT: Inside the lives of struggling ‘alabaru’ at Lagos markets

On a rainy Friday morning in Mile 12 market, Lagos, a middle-aged woman sat on a large plastic bowl placed on a wooden board and gazed at the faces of passers-by, expectantly. A porter, Iya Ibeji, as she wants to be identified, says what started as a temporary job to solve her immediate needs has now stretched into its 15th year.

“I used to hawk palm oil and groundnut oil on the roadside in Mile 12 until the KAI (Kick Against Indiscipline) task force took my wares,” she said in her native Yoruba language.

“That was how I became a porter, there was nobody to lend me money. My plan was to do it for about three months, to raise capital to start a business, that was how I ended up doing it for this long.

“I could not leave it, because challenges keep rearing its head up. I wish to start a business because I am tired of carrying loads every day.”

Iya Ibeji is one of dozens of women across major markets in Lagos helping buyers move heavy loads from their point of purchase to their vehicles or places where they could use public transportation.

Popularly referred to as ‘Alabaru,’ the service usually comes at a fee from the buyer.

The most common loads moved by the porters include cartons of items, bags of tomatoes and vegetables and the fees range from N100 and above depending on the weight of the load.

The porters, mostly women, say they started porterage to enable them to provide the immediate needs of their families.

“May God not make me an irresponsible mother, that my children will be misbehaving, that was why I opted for this work,” said another porter, identified as Iya Fatima, who joined the others two months ago.

“This work is not something to be done forever, I will do it for a while and stop. My hope is that my children are fine in future.”

Most of the porters in Mile 12 market come from outside Lagos. As a result, they are forced to sleep in make-shift structures within the market.

The structure, usually a one-room enclosure, is occupied by about ten persons, with each occupant paying at least N1,000 monthly.

The room is usually called ‘Tanlese’ which loosely means ‘Whose leg is this?’ Or ‘Ile elero mewa’ meaning the house with ten occupants. There are no toilets and the women are forced to use the public toilet in the market where they are charged N50 per day.

Sikiratu Jimoh, a mother of three, said she started the porterage service five years ago.

“I had to do this job because of the meagre income I make in Oyo and also because my children were getting ready to go to the tertiary institution,” she said

“I came to Lagos six years ago. I came to Lagos because of the difficulties back home. My husband is a civil servant and he gave me his consent to go to Lagos to work.”

She lives in a ‘Tanlese’ where she shares the space with seven other women inside the Mile 12 market. Each occupant pays N2,000 monthly.

To be able to raise enough money to pay for their rent as well as send money home, the porters have to start their day early and close late.

Iya Ibeji said she gets to work 7 a.m. on most days, takes a break around noon, and closes at 6 p.m. Her earnings get a bump whenever she renders a service to a rich lady – whom they usually refer to as ‘madam’ – who, most times, offers a generous tip.

“Madam gives us money, some may give us N1,000 or N1,500 and some madams have some porters as customers, and they get more than that. These madams give them to pity their situation,” she said.

PREMIUM TIMES reported how LAPO harasses and maltreats its debtors when they default on their loans.

Racheal Akinbola, a resident of Osun State, came to Lagos in August last year. She used to produce Garri in her hometown in Iwo, Osun State. She sleeps at a makeshift shop at Alaba, in Mile 12.

“I came to Lagos to when I couldn’t pay the loan I took to establish a business but it was not successful.”

Ms Akinbola said she sleeps in a makeshift shop in the Mile 12 market.

Another porter, Adebukola Aderemi, who left Osun State two months ago to make ends meet in Lagos said she needed to repay a loan she took.

“When I came to Lagos, I used to live with my friend until she started showing me ‘attitudes.’ So, now I sleep in front of a shop when the owner has gone home,” Mrs Aderemi said.

Ranti Olatunde, a porter at the market in Lagos Island, said her inability to also repay a loan she took forced her into the porterage service.

“The reason I am doing this work is that I borrowed money, N9,000,” said the former bread seller.

Mrs Olatunde said she was unable to make enough sales from her bread business to offset the loans, forcing her to leave her home in Ikotun for the market in Lagos Island where she shares a space with nine others and pays N1,500 monthly rent.

For Funmilayo Owonikoko, a porter at Ori-Iyorin, Lagos Island, she has been using the money she makes from the porterage to repay a loan she took three years ago.

“I couldn’t pay the money that why I came here.”

The task, however, is not without its hazards.

Iya Ibeji said while at work one day, she was accidentally hit on the leg by a male porter.

“Since then, I have been spending money on the leg. When I was hit, I just slumped. Some of his colleagues came to my rescue, straightened it and apologise on his behalf,” she said.

“They said he was not in his right sense, that was how I managed myself home, my pan was later brought to me.

“The second time I fell was when I was carrying some tomatoes and slipped on some tomato leaves and the load fell on my neck,” she continued.

“Some guys came to my rescue. I managed to get up and carried the goods to the customer and she gave me N200 with a Paracetamol in her car that day. I had to go to the traditional medics for treatment.”

Mrs Jimoh said they also encounter dishonest customers who would not pay them after carrying their loads.

“Sometimes when we carry goods and put it in the boot of the car, the driver will zoom off. My eye will turn red. It has happened to me three times,” she said.

“And some people will say they don’t want an elderly person, I will be embarrassed and unstable, I will sit down, unhappy, but I will always remember what I came here to do.

“Even the apartment that we live, our landlord is always troubling us, he will say don’t stay here o, don’t do this, don’t do that. It is painful because back at home I have three rooms with a parlour.”