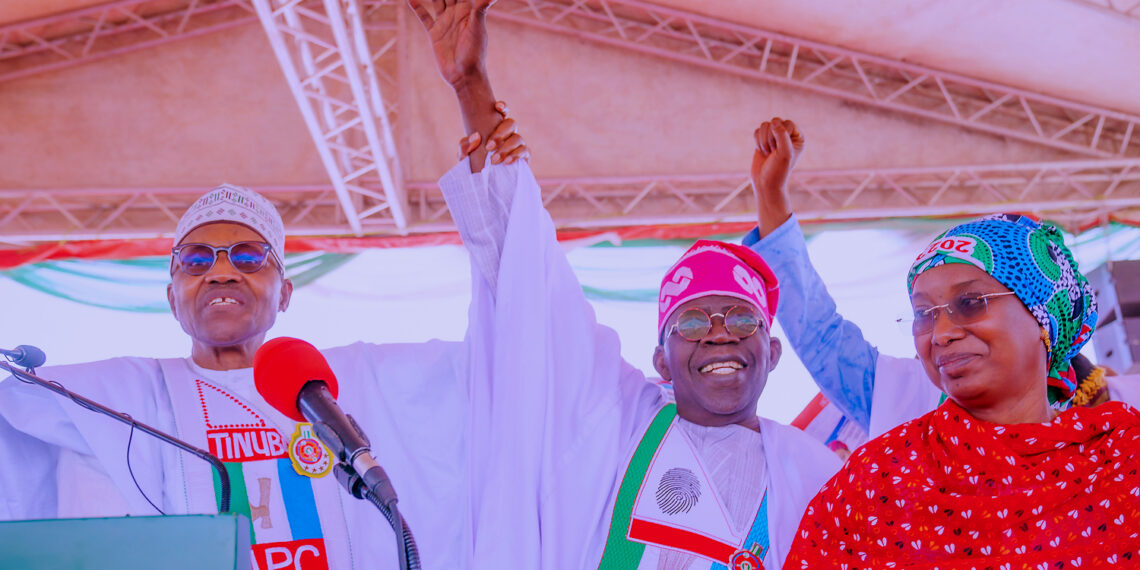 The president flagged off the campaign rallies for APC candidates at the Mahmud Ribadu Square in Yola.

President Muhammadu Buhari, on Monday, personally flagged off the campaign of the presidential and governorship candidates of his party, the All Progressives Congress (APC) in Adamawa State.

During the campaign rally which was held at the Mahmud Ribadu Square in Yola, Mr Buhari called on residents of the state to vote for the APC’s presidential candidate Bola Tinubu and the party’s governorship candidate, Aishatu Binani.

“I am here to present to you the presidential candidates of our party, Bola Ahmed Tinubu and the governorship candidate in Adamawa Aishatu Binani,”, he said, raising the hands of both candidates.

Mr Buhari, who spoke both in English and Hausa, said: “Please don’t shame us, vote for Bola Tinubu he would work for the country, he would not disappoint you, and the people of Adamawa will set a record for voting for a female governor, we in the APC are backing her,” he added.

“The APC is again going to be the number one having a female governor. Since we started the system, we are presenting one (female governorship candidate) and she is going to win, God willing,” Mr Buhari said.

The president said the APC will continue to prioritise security, education, and healthcare to better the life of Nigerians.

He urged the residents of the state to work hard in the field to produce the food they eat, pay their taxes and ensure children go to school.

Mr Buhari also asked the residents to vote for people who are very responsible, people who will keep them informed and act fairly and justly on resources meant for the masses.

On security, Mr Buhari told the residents to secure their respective localities against criminals. He said they should be vigilant.

“You must understand him, don’t allow the problem people to come and dominate your localities,” he said.

The president was accompanied to the rally by several APC governors. He was welcomed by thousands of supporters who attended the rally.

According to the APC campaign timetable, Mr Buhari will attend rallies in 10 states which include; Adamawa, Cross River, Ogun, Kwara, Yobe, Nasarawa, Katsina, Imo and Lagos.

After the Adamawa rally, the president proceeded to Yobe State for the APC rally in the state.

Adamawa State is governed by the opposition Peoples Democratic Party (PDP), and the opposition presidential candidate of the PDP, Atiku Abubakar, is from the state.

Citizenship Bay: Top eight passports that give you exclusive access to 150+ countries visa-free