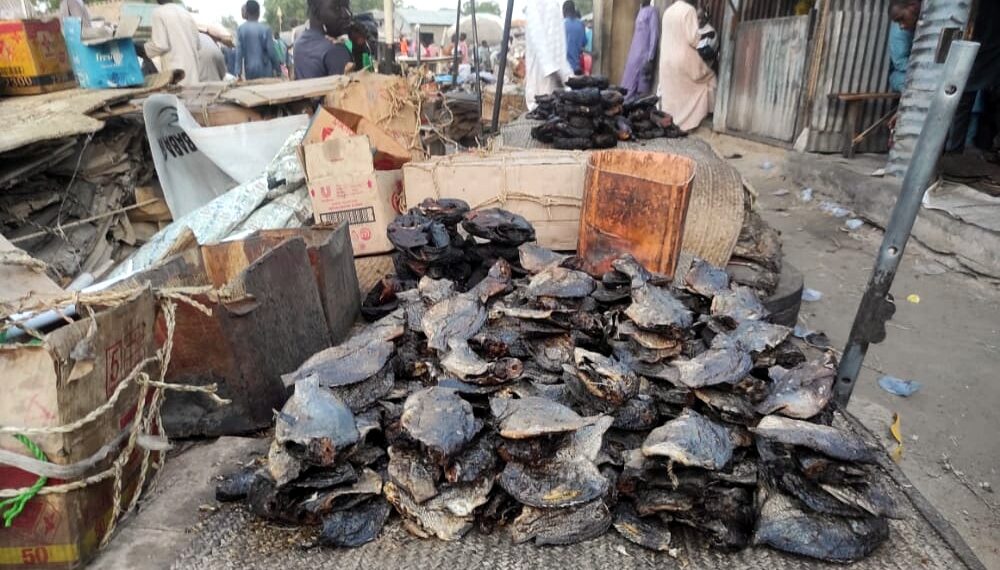 Fishing was one of the hardest hit businesses at the peak of the Boko Haram insurgency, but the merchants said things are gradually returning to normal.

Business activities have fully resumed at the famous Baga Fish Market, Maiduguri, an indication that life is steadily returning to normal after more than a decade-old insurgency halted many business activities in the town.

The market which is famous in the northeast region and surrounding states is known for the wholesale supply of smoked fish. The market in Maiduguri itself is named after Baga, a riverine village around Lake Chad waters.

Most of the merchants in the Baga road fish markets in the Maiduguri metropolis have offices, staff and contacts in communities around communities close to Lake Chad on the Nigeria – Chad border – the main source of the fish sold in the market.

The Boko Haram insurgency led to disruptions of fishing activities in Lake Chad thus cutting off most supplies to the market.

Kukawa Local Government especially Baga is one of the worst hit areas by the Boko Haram insurgency. Due to the activities of the Islamist Militants, fishing on Lake Chad almost came to an end. In the militant-controlled communities around the lake, residents were prohibited from fishing or forced to pay steep protection levies before they are allowed to fish.

Due to the blocking of the roads linking the communities around lake Chad to Maiduguri, either by the militants or the Nigerian military, many supporters could not bring their fish to the popular market.

“For eight years, we were forced to be on our own because of how bad the situation was,” the State Chairman of the Fish Dealers Association, Abacha Mandalama, told PREMIUM TIMES. “It was a terrible situation but we’re picking up and life has to continue,” said the Organising Secretary of the Fish Dealers Association, Malam Baba, while taking this reporter around the market on Tuesday.

Traders were seen filling cartons with smoked fish and loading them into waiting trailers.

“This particular one (vehicle) is going to Abuja,” Malam – Baba Musa said, pointing at a red trailer. “They leave here every evening some to Lagos others to Abuja or Port Harcourt. You know this is the largest fish market in West Africa.”

Recounting the challenges they faced during the troubling period of the insurgency, customers and fishmongers told PREMIUM TIMES they are happy that the reduction of hostilities in the area is resulting in a boom in commercial activities.

One of the fish sellers, Modu Mamman, said he stopped going to the market.

“It was terrible. Very terrible, this place was completely deserted because there was no fish. Now, we’re back to business and everything we’re happy,” said Mr Mamman, as he packs fish into cartons.

Abubakar, another fish seller, said his family lost its capital during the insurgency and his family is now starting from scratch.

“But we’re gradually picking up now,” he said. “You know the river banks where we used to stay were all blocked by the soldiers and terrorists. Sometimes when they were terrorists, the soldiers would ask people to go back home. We eventually stopped going to all the rivers and even Lake Chad,” he said.

Both fishmongers and buyers agree that business in the market is experiencing a renewed boom. However, there are still several hurdles to be cleared to get business back to its pre-insurgency state.

“But we still have challenges,” Mr Malam – Baba said. “Ever since this insurgency started we didn’t get a kobo from the federal government. Yes, the state has once helped but it’s not sufficient. Some of us have lost capital while others are still living in fear.”

Mr Mandalama, the chairman, said activities have resumed in earnest but some of his members are feeling the impact of the insurgency.

“Most of us are only into fish business and nothing else. Some are also into farming, but it’s also affected. We thank God. It’s Okay that normalcy is returning,” he said.