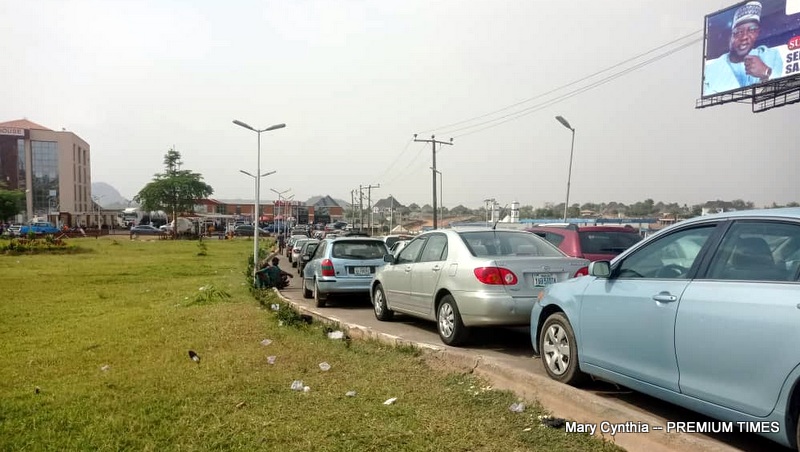 In many states, petrol is sold for as high as N270 at filling stations, while the product is barely available in Abuja and Lagos.

The Nigerian government and fuel marketers have offered varying explanations for the ongoing fuel scarcity that has affected states across the country for weeks without reprieve.

While the NNPC said the queues in Lagos and Abuja are largely due to ongoing “road infrastructure projects” around Apapa and access road challenges in some parts of Lagos depots, major marketing group IPMAN said it was caused by high prices imposed by fuel depot owners who store the product for the NNPC.

In the past weeks, long queues returned to filling stations in many cities across the country, leaving people struggling to go to work or engage in other daily activities.

The scarcity has persisted with filling stations operating at reduced capacity despite the government’s repeated claims it has enough stocks.

In October, fuel scarcity hit major Nigerian cities including Abuja and Lagos. At the time, the Nigerian Midstream and Downstream Petroleum Regulatory Authority (NMDPRA) blamed the shortage on flooding in Lokoja, the Kogi State capital, that stopped fuel truckers from dispensing.

However, weeks after the flood receded, queues resurfaced. A PREMIUM TIMES correspondent who visited petrol stations in Abuja on Tuesday afternoon found that many filling stations were closed, while others were besieged by motorcyclists, tricycle owners, as well as private and commercial drivers.

Many filling stations in the APO, Wuse, Gwagwalada, and Banex areas of Abuja sold petrol at prices ranging between N179 and N210. Outside Abuja, residents said fuel stations sold petrol for N250 in many states.

In Abuja, there were queues at major fuel stations visited across the city.

On Tuesday, a long queue of both motorists and motorcyclists was observed at the NNPC filling station along Airport Road, Lugbe.

Ashafa and NNPC fuel stations at Apo sold petrol to motorists at N179, while AA Rano, NIPCO and Shafa along Lugbe Airport Road were also open to customers. Total fuel station in Wuse 2 was under lock and key.

An attendant at the NNPC fuel stations who refused to be named said they have been experiencing long queues at their station for two weeks now.

“This queue you are seeing now, we’ve been experiencing it at this station for two weeks now. If you notice, we see that many stations don’t have fuel. This is because of a short supply of petroleum products in the city,” the attendant who refused to give his name said.

A civil servant, Mathew Afolabi, at the NNPC station said he had been in the queue for over an hour and could not get fuel. He said that he later resolved to buy from the black market, where he got 10 litres for N4,000.

“I have been in the queue for over an hour now, but I still couldn’t get the product as you can see I just bought 10 litres from a black marketer for the rate of N4,000.

A visit to some of the fuel stations around Berger Roundabout, Utako and Kubwa Expressway, showed that nearly all the stations had long queues, while some stations were shut down.

In Ekiti, some filling stations were seen dispensing petrol at between N260 and N270 per litre as against the N165 pump price while many that did not have supply closed their outlets.

A car owner, Chikwado Romanus, told PREMIUM TIMES that the return of fuel queues in the country was not good for the economy.

“Here in Ekiti, you can hardly get fuel even when you see it. We spend hours queuing to buy when we could have been doing something more productive with our time,” he said.

“I just drove down to Tad filling station this morning but if you see the queue and have been there since then I’m yet to go and open my shop because I want to fill my tank first.”

In Enugu, there were long queues at some of the major fuel stations visited across the city.

Addressing journalists in a press conference in Abuja on Tuesday, NNPC’s Executive Vice President, Downstream, Adeyemi Adetunju, blamed the fuel queues in Lagos State and Abuja on some construction projects going on in Lagos.

“The recent queues in Lagos are largely due to ongoing road infrastructure projects around Apapa and access road challenges in some parts of Lagos depots,” Mr Adetunju said.

He said the gridlock is easing out and NNPC has programmed vessels and trucks to relieve depots and loadouts from depots to various states are closely being monitored.

“Abuja is impacted by the challenges recorded in Lagos. NNPC Retail and key marketers have intensified dedicated loading into Abuja to restore normalcy as soon as possible.

“We want to reassure all Nigerians that NNPC has sufficient products, and we significantly increased product loading including 24-hour operations in selected depots and extended hours at strategic stations to ensure products sufficiency nationwide.

“We are also working with the NMDPRA, MOMAN, DAPPMAN, IPMAN, NARTO, PTD, and other industry stakeholders to ensure normalcy is returned, ” he said.

The NNPC has a “national petroleum motor spirit (PMS) stock of over 2 billion litres. This is equivalent to over 30 days of sufficiency,” he added.

Meanwhile, speaking during an interview on Channels TV’s Politics Today on Tuesday, the president of Independent Petroleum Marketers of Nigeria (IPMAN), Chinedu Okoronkwo, said the distribution crisis caused by vandalism of depots belonging to the NNPC should be blamed for petrol scarcity in parts of the country.

“It is very important to know where we (IPMAN) belong within the chain. This product pms is the product the government is still paying subsidy for, that is, the government brings it to the NNPC.

“Remember that nearly all the NNPC depots are not working, over 80 per cent of them, because of vandalism. We have at least 21 (referring to NNPC depots) that I can count. When they bring this product in, they now begin to put it in private depots and pay them triple charges,” Mr Okoronkwo said.

He said when this product is pumped into those depots, the owners of depots claim to have ownership. Our members cannot easily access this product. They are now made to buy from tank farm owners, that is the third party.

“When this product is gotten from the mother vessel, those tank farm owners will go and bring it. They will now put their cost. You don’t expect them not to break even. These are the people who will now in turn sell to us.

“Those who get from NNPC directly, it is N148.19 per litre. These private tank farm owners, by the time they begin to put their own charges, which involve hiring vessels, NIMASA, NPA, and a lot of things associated, from their depots, you can get it for either N185 or N210.

“Their excuse will be they hire vessels to take the product from the mother vessel and some of these things are dollarised so you have no choice,” he added.

Speaking on the availability of the product Mr Okoronkwo said those who have the muscle and everything still buy it.

“This product is there because of what I just said. NNPC has enough stock but because of this distribution something, we need to do something about this situation,” he said.