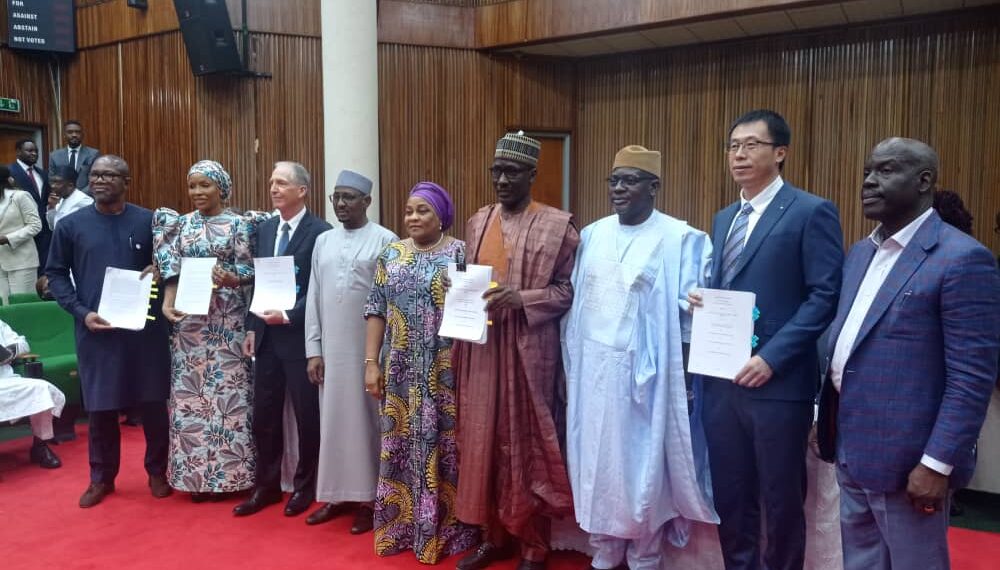 The National Petroleum Investment Management Services says the signing should lead to the production of 10 billion barrels of oil.

The agreement according to NNPC Limited could put to an end the protracted dispute between the state-owned company and the contractor parties in Oil Mining Leases (OMLs) 128, 130, 132 and 133, as well as 138 PSCs.

According to the company, the signing of the new PSCs is a key milestone achievement by NNPC Ltd which would ultimately unlock opportunities within the Nigeria upstream sector.

It said the execution of the PSCs will deepen investment and development of Nigeria’s rich petroleum resources and ensure that the trifold mandate of the NNPC Limited to ensure energy availability, sustainability, and accessibility is achieved.

Speaking at the event, Group Chief Executive Officer of the NNPC Limited, Mele Kyari, said the deal was part of the corporation’s dispute resolution and renewal strategy of 2017, aimed at securing out-of-court settlement of all disputes around the 1993 PSC and agreeing on terms for their renewal.

“This is a major landmark achievement since our transition to a limited liability company under the Company and Allied Matters Act (CAMA),” Mr Kyari said.

“The Petroleum Industry Act (PIA) was signed into law by President Muhammadu Buhari on 16th August 2021. This law gave NNPC the legal backing to renegotiate all her existing PSCs in conformance to the provisions of the new Act within 1 year.

“A major issue for all of us is all forms of litigation. As you do this, it damages relationships and more than anything else, it stifles investment. That is why exactly that situation was brought to the table, that except for one asset, practically did crude oil enter into any new commitment, since 2007,” he said.

“This is clearly related to the disputes around the 1993 PSC, and we knew that as the JIA process was going on the process to put the Petroleum Industry Act, it was very obvious that the resolution or the dispute of the 1993 PSC is a critical part of that bargain.

“Today, we are happy. Our country kept its promise, and I understand very clearly that it would not have been possible except you had some courage of leadership, and all of us must give this credit to President Muhammadu Buhari, who agreed that we must resolve this most amicably. In a manner that benefits the country but also in a way investors recover their cost and make the competitive benefits that they must have from their investments.

“In the end, the PIA recognises all those terms. The fiscal terms are re-engineered to make sure that these terms are met and also allowed us by law to close our disputes amicably so that we stop all litigation so that some terms and conditions will enable us to move forward with our relationship and that is why we are here today,” he said.

“Today, we are on the verge of making history, the history to resolve all pending disputes in our PSCs with a potential to develop and monetize over 10 billion bbls and generate revenue in excess of US$ 500 billion to stakeholders, and attainment of energy security for the country,” he said.

“The execution of the revised PSCs today will deepen investment and development of Nigeria’s rich petroleum resources and ensure that the trifold mandate of the NNPC Ltd to ensure the security of energy supply, sustainability of Energy Supply, and accessibility is achieved.

Nigeria’s production sharing contracts commenced with the 1993 PSCs, subsequently followed by 2000, 2004, 2005, 2007, 2010 etc. The PSC in Nigeria was mainly motivated by funding challenges faced by the joint venture arrangements that led to a reduction in production and revenue.

Mr Wunti said since the introduction of the PSC into Nigeria’s hydrocarbon production algorithm, over 5.9 billion barrels of oil equivalent have so far been produced and monetised by the various PSCs arrangements. Over the last two decades, the PSCs have cumulatively accounted for about 40 per cent of Nigeria’s oil production.

The event was attended by the Chairman of the NNPC Board, Margary Okadigbo, the Chief Executive Officer of the Nigerian Upstream Petroleum Regulatory Commission Gbenga Komolafe, the Chief Executive of the Nigerian Downstream and Midstream Petroleum Regulatory Authority Farouk Ahmed, the Executive Chairman of the Federal Inland Revenue Service Mohammed Nami, the Group General Manager of the National Petroleum Investment Management Services Bala Wunti, Chief Financial Officer, Umar Ajiya and other top officials in the industry.