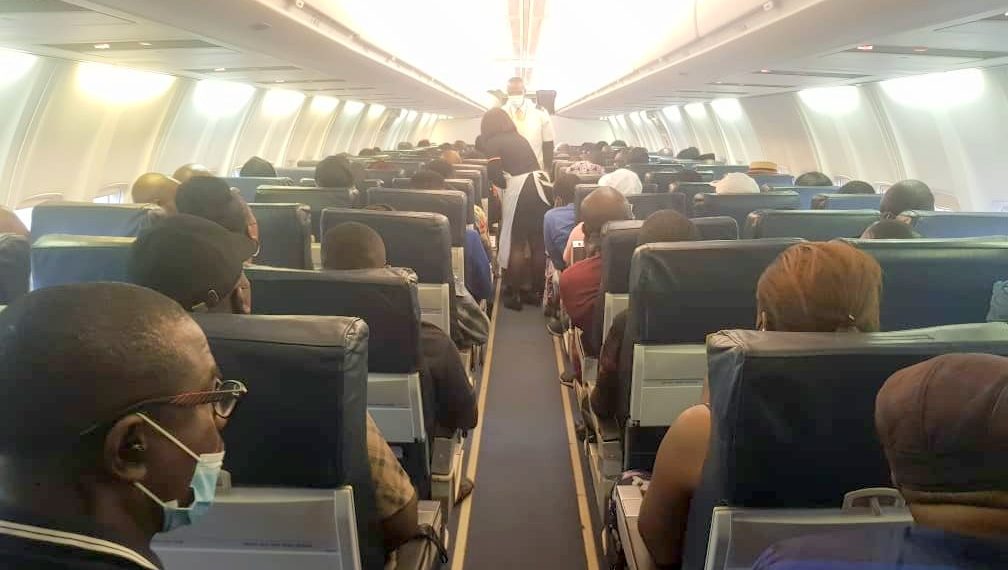 Angry passengers aboard, after they had experienced a long delay at the airport.

As more people adopt air travel, they have also faced a different kind of challenge: a rising spate of delayed flights.

In late November, after Airpeace cancelled a 3.00pm Ibadan-Abuja flight he had booked, Fadugba Ekundayo who was already at the airport when he learnt of the cancellation, decided to try Ibom Air.

He had an appointment to keep, so he booked Lagos to Abuja for 8.00pm, and opted to travel by road for three hours to catch the flight in Lagos. He was greeted by yet another disappointment.

“Ibom air without any form of apology except for the usual operational reasons delayed the flight till about 10: 30 pm,” Mr Ekundayo narrated on Facebook.

In Lagos, he saw passengers of Max Air heading to Kano, whose flight had been slated for 6:00 pm, still stranded at the airport.

When he eventually arrived in Abuja shortly before midnight, Mr Ekundayo ran into robbers who snatched his phones and other valuables just as he was leaving the airport.

Traveling in Nigeria has lately become a nightmare with many of the country’s roads taken over by kidnappers, forcing many to seek alternatives. As more people adopt air travel, they have also faced a different kind of challenge: rising spate of delayed flights.

Mr Ekundayo is one of several passengers that have experienced disappointments as result of flight cancellations or delays by airline companies in the country without concrete reasons.

Aniekan Essienette, Ibom Air’s group manager, marketing and communication, acknowledged that indeed the airline had repeated flight disruptions in November. He said the disruptions were caused by weather fluctuations and flight maintenance.

“Yes we had a week of flight disruptions owing to weather and a couple of unscheduled maintenance carried out on our aircraft,” she told PREMIUM TIMES, adding that while that was on, they had sent messages rescheduling some of the flights.

“Unfortunately some of them ran into the night and we deeply apologise to our passengers for that,” she said. “It is not in our character to keep passengers beyond flight times as our brand ethos is schedule reliability, on-time departures and excellent service. We certainly fell short this time, we deeply apologise and promise to do better. We want to assure our passengers we appreciate their patronage, and would never take it for granted. We have taken the learnings and we are positioned to handle much better next time.”

The airline’s November scorecard seen by this newspaper showed that Ibom Air operated a total of 1023 flights that month, of which 283 were delayed, 119 rescheduled, and 19 cancelled.

Stanley Olisa, Air Peace spokesman, also told this newspaper that the airline apologised for the cancellations and delays their passengers must have encountered.

He said: “It hurts us that passengers have to experience such. But no airline intentionally delays or cancels flights.” 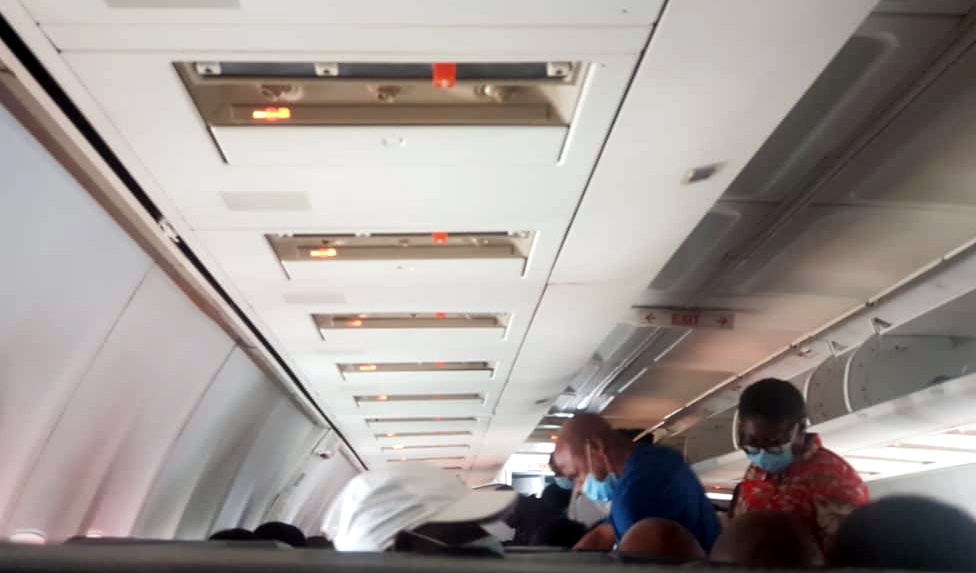 Mr Olisa explained that delays and cancellations are always caused by “unexpected operational realities”, saying that; “we clearly communicate to the passengers, with apologies for the inconveniences.

“We are assuring the flying public that from December 10 these disruptions will be a thing of the past as we’re introducing 2 Airbus 320s, one more Embraer 195-E2 aircraft (totalling five on ground), and most of our aircraft on overseas maintenance will be returning very soon,” the official said.

Azeezat Armah, a nursing mother who also shared her recent encounter with PREMIUM TIMES, said she booked a 2:30 pm flight from Abuja to Lagos with Air Peace, but the trip was delayed for over five hours without apologies or explanation.

Before leaving for the airport, the company had sent a mail that her flight had been shifted from 2:30 pm to 4:45 pm, and apologised, but on getting to the airport, Mrs Armah said she met other passengers who had booked 12:00 pm flight still waiting to board.

“This time around, they did not announce the flight postponement, people were just there seated, nothing was happening, no apologies or explanations were given for their actions,” she told PREMIUM TIMES.

Mrs Armah said they were called to board at almost 10:00 pm, and that the company had to combine five batches of travellers on an international flight that later arrived.

“You can imagine what I passed through that day with my baby,” the displeased passenger recalled, saying they arrived Lagos at some minutes after 11:00 pm. They waited another two hours before being conveyed from the international wing to pick up their luggage.

Another nursing mother, Maryam Mojeed, who shared her November 21 experience with Max Air, said she booked a 3:50 pm Max Air flight from Abuja to Benin, but arrived at her destination at almost 7:00 pm.

“Earlier that day, I was notified that the flight was now moved backward to 3:10 pm which made me hurriedly leave my house in order not to miss the flight,” Mrs Mojeed recalled.

Mrs Mojeed said she arrived at the airport on that day at 2:00 pm, but was surprised that no boarding announcement was made for the 3:10 pm.

While wondering if she had missed the flight announcement, she said she observed that other passengers bearing similar tickets as hers were still seated.

“I began to wonder what was happening since no apologies or whatsoever from them for delaying the flight again,” she said. By 4:30 pm, the airline made an announcement that the flight had been delayed by another 30 minutes. They were finally called to board at 5:16 pm.

Often, during the long wait at the boarding terminals of airports, most passengers are forced to spend more on food they never budgeted for, especially as foods and even snacks sold at Nigerian airports are usually more expensive.

Repeated calls to the above help lines designated by Max Air for enquiries were to no avail, as they are all switched off.

Some Nigerians who also experienced similar ordeals recently took to social media to vent their anger.

“When will Air Peace be called to order by the authorities? TV adverts are utter rubbish when you can’t run a simple schedule! Bleeding shame! FAAN,” Mr Olaoye wrote.

Koonlay Perse, another user said “I’m not surprised! Our local airlines are not better than “Molue” buses plying Lagos roads!! I’m yet to remember a local flight I had in Nigeria that performed punctiliously on time.”

In another post, Segun Basorun, said: “Quite unfortunate and very frustrating. Landed Abuja yesterday on Aero at 11.45 pm, a supposedly 5pm flight. No apologies no nothing. I think it’s time we have a systematic response to this madness by Nigerian airlines. Imagine, the first flight? I pity all those on Airpeace flights today.” 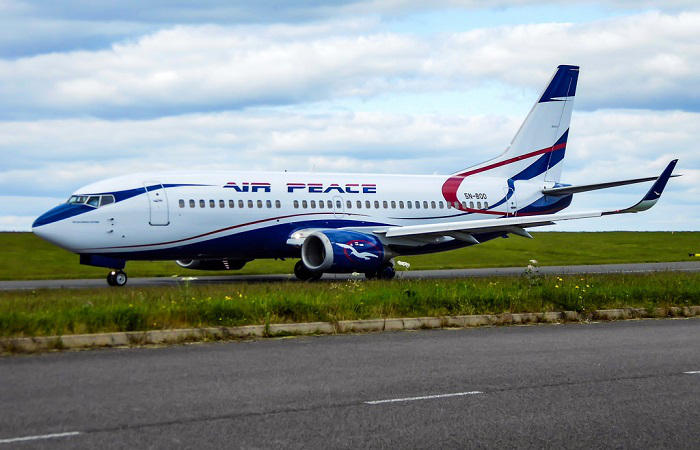 “So disheartening to the say the least Sir. Especially, when you realise that even with the massive outcries and cascades of complaints by passengers, nothing have been done by the authorities involved. With the kind of government support and public good will air peace has been enjoying, it is just unbelievable the way they treat passengers,”Lucious Kelechi wrote.

The Minister of Aviation, Hadi Sirika, in July had announced that airlines shall reimburse passengers after a two-hour delay. It is not clear how that directive has been enforced.

He, however, explained that it is not all delays or cancellations that are not excusable. Some he said are caused by adverse weather conditions or technical issues or safety related issues.

“Flight would be delayed till it is safe to operate. But the aairline is duty-bound to notify their passengers on time,” he said.

Calls and WhatsApp messages sent to Henrietta Yakubu, the spokesperson of the Federal Airport Authority of Nigeria, FAAN, were unanswered.